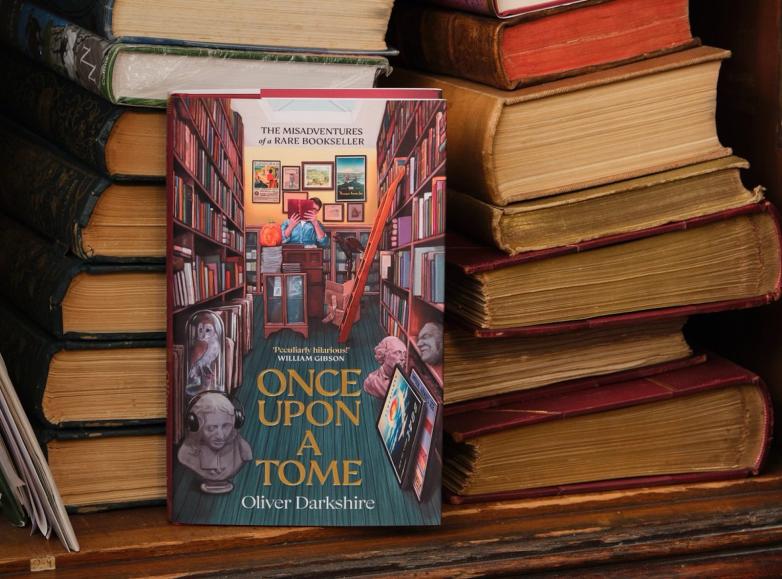 The collision of old and new technologies has produced many intriguing partnerships and Oliver Darkshire’s memoir Once Upon A Tome: The Misadventures of a Rare Bookseller offers a fine example.

Sotheran’s has been selling books since 1761, initially in York and then London from 1815, and is celebrated for its rare books and prints business. Twitter is a rather younger beast, still in its teens, but when Oliver Darkshire took the reins of the company’s page, he worked wonders. From a modest following, the page now has more than 42,000 followers, a remarkable number for such a company and all thanks to his quirky tweeting style. His memoir is written in similar vein. Frank Swinnerton’s cosily clubbable The Bookman’s London it is not.

Darkshire was, it would not be unfair to say, an unlikely candidate for an apprenticeship at the eminent booksellers on London’s rather discreet Sackville Street. The 28-year-old had not been a dedicated bibliophile from birth and applied for the position on something of a whim. But happily he got the job and Once Upon A Tome, published by Bantam Press, charts his journey into the sometimes peculiar world of rare bookselling in general and day-to-day life at Sotheran’s in particular.

He writes very engagingly and extremely honestly. Indeed, some of the anecdotes make it hard to believe that Sotheran’s can be such a successful business. Here he is on his sales technique for an unbookish wife looking to buy a book for her book collector husband: “We found her a nice gift in the end, by the tried and tested method of throwing random books in front of her until she saw a binding with enough gold on the side that it pleased her tastes.”

His sardonic wit runs through the book in a similar fashion to Shaun ‘The Diary of a Bookseller’ Bythell’s recent succesful series about secondhand bookselling in Scotland. But here there’s more of a mischievous Terry Pratchett tone, perhaps not surprising given Darkshire’s interest in Dungeons & Dragons – he even devises a dice-based role-playing game about running a rare bookseller in the appendix. Serious customers then are divided into Smaugs (who collect anything and everything) and Draculas (who concentrate relentlessly on a single area), browsers who browse but never buy are ‘Cryptids.’ Elsewhere he talks about cursed and poisonous books in stock, ghosts in the bookshop, and bookshop basics such as valuing (again, a very down to earth explanation rather than a more staid, official one).

Most importantly, though constantly self-deprecating, Darkshire obviously likes his job, comes across as an intriguing and generous colleague, and believes that the rare book business is far from dead.