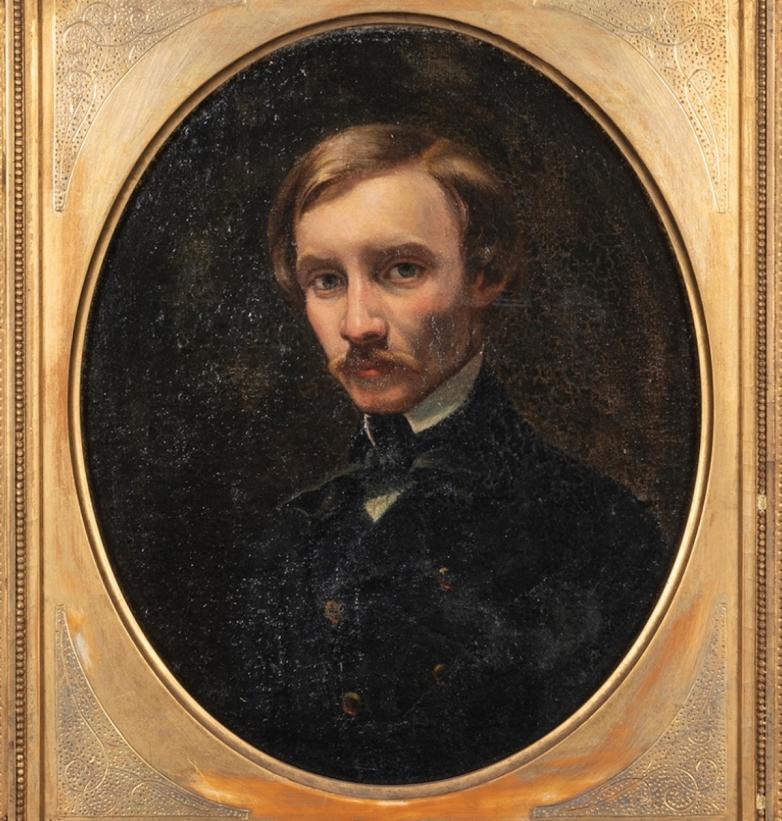 A painting of novelist Robert Louis Stevenson by William Cosens Way is estimated at $300-500.

Chicago — Potter & Potter Auctions is pleased to announce their upcoming Fine Books and Manuscripts Sale to be held on July 21st, 2022 starting at 10am. This auction will be conducted entirely online via the company's website, as well as on Liveauctioneers.com and Invaluable.com. All lots are available for preview now at www.potterauctions.com.

Highlights from this midsummer sale include hidden gems, classics, and examples that bridge collecting categories.

·      Lot #235, Samuel Langhorne Clemens' (1835–1910) (“Mark Twain”) The Adventures of Huckleberry Finn, is estimated at $2,000-3,000. This first American edition, early state example was published in New York by Charles L. Webster & Company in 1885. It has a sheepskin binding; of the four bindings issued, the sheep was considered to be the rarest, as it was particularly susceptible to wear with only 2,500 copies produced.
·      Lot #273, Henry Morton Stanley's (1841–1904) In Darkest Africa; or, The Quest, Rescue, and Retreat of Emin, Governor of Equatoria, is estimated at $800-1,200. The set is a first American edition, number 13 of 250 copies from the “Demy Quarto de Luxe” edition, and is signed by Stanley. These tomes were published in New York by Charles Scribner’s Sons in 1890.
·      A painting of novelist Robert Louis Stevenson (1850-1894) by William Cosens Way (1833–1905), is estimated at $300-500. This oil on canvas work is framed, measures 15 ½ x 13," and dates from c. 1870. This portrait was likely completed in the early years of the writers career as he was making a name for himself in London’s literary circles. Way's portraits are rare as he is primarily associated with ruins and landscape works.
·      Lot #49, a Book Club Edition of Stephen King's The Dead Zone, is estimated at $300-400. It was published in New York by the Viking Press in 1979. It is inscribed, "For Nancy, All best and I, hope all your zones will, be live ones, Stephen King, 7/25/82”. The book has provenance to Nancy Joannes and includes a laid in newspaper clipping announcing a sci–fi convention at the Chase–Park Plaza Hotel where King spoke in July, 1982.
·      Lot #62, Jim Thompson's (1906–1977) Child of Rage with an Introduction by Gerald Petievich, is estimated at $250-350. It was published in Los Angeles by Blood & Guts Press in 1991. This example -- a first unexpurgated edition, limited issue, and one of 10 copies designated specifically for the Thompson family -- features its original unclipped dust jacket designed by Andy Warhol and is signed by Petievich. It is being sold with a first edition of Thompson's Child of Rage, published in New York by Lancer Books in 1972. These books were purchased from the Estate of Brian Miller, son of Patricia Thompson Miller -- the daughter of Jim Thompson.

According to Chris Brink, Director of Fine Books & Manuscripts at Potter & Potter Auctions, "Our summer online sale has a wide array of tastes for all bidders. Whether you're building out inventory for your store with the massive lots of detective fiction we are offering, or you are decorating your library with book stands and bookish decor – we have it all in this sale. This summer is just a small breadcrumb to what we have in store for October. Stay tuned."