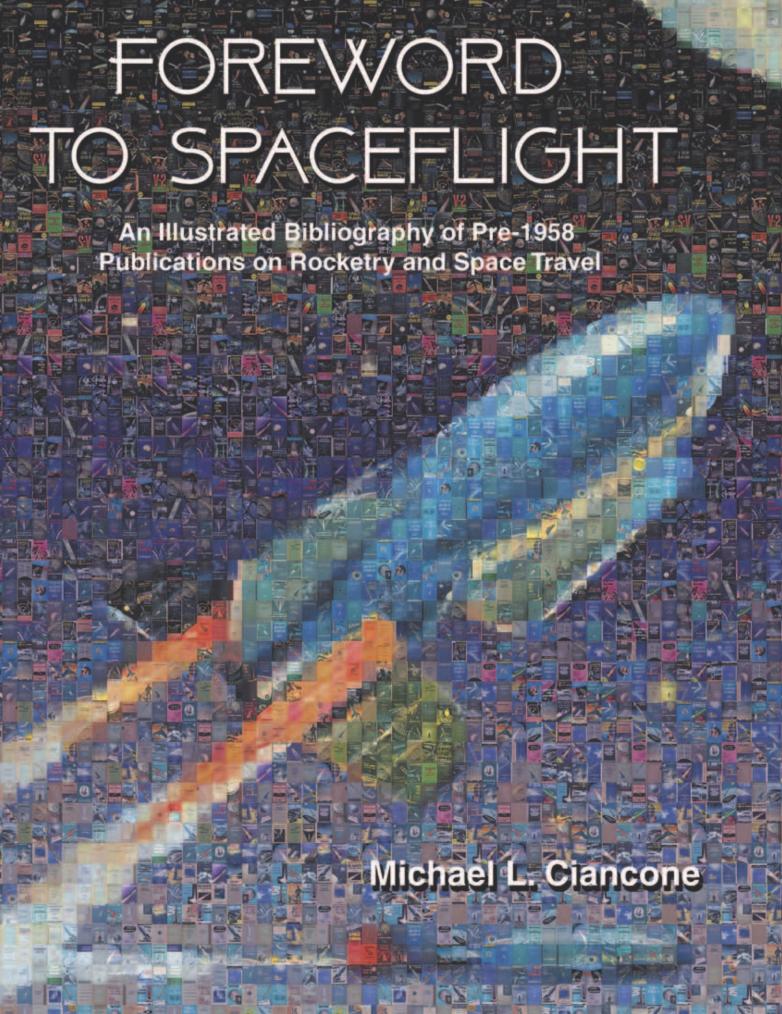 Landing in mailboxes this week (if not already) is our fall quarterly, the last page of which features book collector and NASA engineer Michael L. Ciancone. Can you guess what he collects? If you guessed books about rockets and spaceflight, give yourself a gold star.

The first book Ciancone bought for his collection is also his favorite: The Conquest of Space (Penguin Press, 1931) by David Lasser. As he told us, “Lasser was a founder and first president of the American Interplanetary Society in 1930, which became the American Rocket Society a few years later. They eventually joined with the Institute of the Aerospace Sciences in 1963 to form what we know today as the American Institute for Aeronautics and Astronautics. Thus, this book represents the start of a thread that runs to the present. It is also the first English-language non-fiction book on the possibility of using rockets for human spaceflight. I had the privilege of meeting Mr. Lasser in 1992.”

Ciancone built upon that purchase, adding 600+ more books to his collection. He also published Foreword to Spaceflight: An Illustrated Bibliography of Pre-1958 Publications on Rocketry & Space Travel (Apogee Press, 2018). Foreword to Spaceflight is the long-anticipated update to Ciancone’s previous book, The Literary Legacy of the Space Age. It offers a unique resource for book collectors and historians alike through hundreds of annotated entries that identify books in several languages related to the use of rockets for spaceflight published before Sputnik.

“The Literary Legacy of The Space Age by Michael L. Ciancone is the most current, most comprehensive and most useful bibliography of nonfiction monographs documenting high altitude rocket research and flight into space published before 1958,” said ABAA bookseller L.W. Currey. “The scope of this updated second edition is substantially expanded with the addition of an extensive list of nonfiction works on rocketry and space travel in Russian through 1957 compiled by Prof. Asif Siddiqi, with contributions by Ciancone. Additionally, the new edition includes pictures of covers and dust jackets of many of the works described, which provides a wonderful iconography of early space art. For early publications on rocketry and spaceflight, this book is the Brockett for the space age.”

You can read more about Ciancone’s collection in our fall issue.