The Bay Psalm Book & Latin Americana Among Highlights at Swann 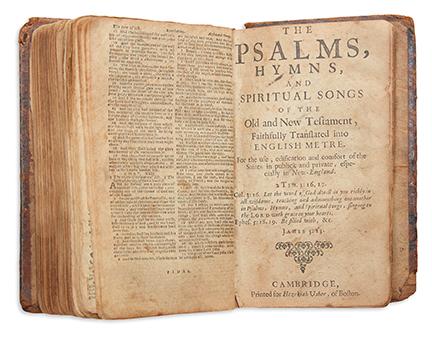 A very early edition of The Bay Psalm Book leads the sale. The 1640 Bay Psalm Book was the first book printed in British North America, a new translation of the Psalms done by colonists Richard Mather, John Eliot, and Thomas Weld, with an introduction attributed to Mather or John Cotton. The text went through several editions, all extremely scarce today. The present edition is bound after a 1648 Cambridge Bible and was printed for Hezekiah Usher of Boston, circa 1648-65, and carries an estimate of $50,000 to $75,000. Additional religious texts of note include a first edition of the Book of Mormon, Palmyra, NY, 1830. Released days before the official establishment of the church on April 6, 1830, the first edition is the only edition listing Joseph Smith as the “author and proprietor” rather than as the translator. The missionary tract is expected to bring $40,000 to $60,000.

Latin Americana features a strong showing of Mexican material. Highlights from the selection include a broadside announcement of the fall of the Alamo issued in Mexico City shortly after the Texan defenders of the Alamo were defeated on March 6, 1836, estimated at $40,000 to $60,000. A compilation of the Mexico’s early printed treaties with European and American nations is available at $20,000 to $30,000. Manuscript material features a royal decree authorizing passage for Hernán Cortés from Spain through the Caribbean on his return to Mexico, at $10,000 to $15,000. A run of material from the Mexican Inquisition features a 1664 broadside forbidding three books, including one on wine ($6,000-9,000); a 1797 printed decree with an annotated list of 29 prohibited or restricted books ($6,000-9,000); and manuscript pages from the testimony and proceedings during the case against Fr. José Brunón de Vértiz dating to 1649–59 ($5,000-7,500).

William Sydney Porter, best known as the author O. Henry, is present with a small archive of drawings made to illustrate a lost mining memoir, prior to his fame as an author. The 27 drawings, with manuscript captions throughout, are expected to bring $30,000 to $40,000. Additional items from the nineteenth century includes an albumen cabinet card of Lucy Parsons, a labor organizer who was considered “more dangerous than a thousand rioters,” ($800-1,200).

Exhibition opening in New York City March 5. The complete catalogue and bidding information is available at www.swanngalleries.com and on the Swann Galleries App.