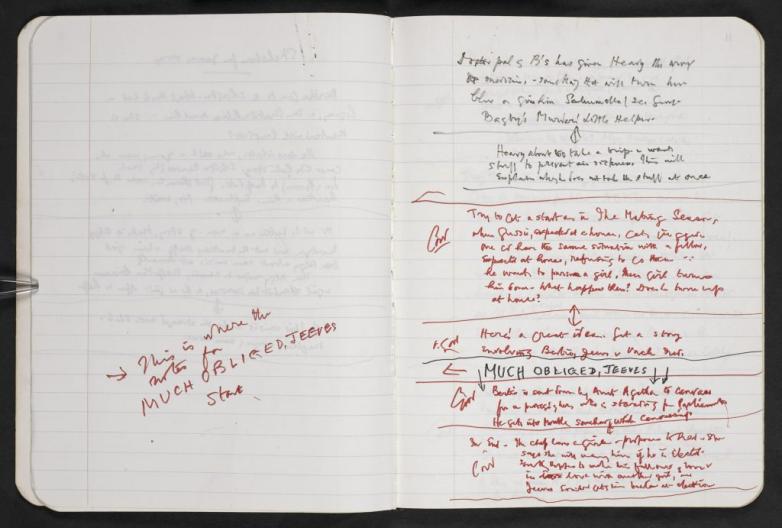 Courtesy of the Wodehouse Trustees

Sir Edward Cazalet, the step-grandson of prolific British author P. G. Wodehouse, has loaned Wodehouse's personal archive to the British Library. For the first time ever, the Wodehouse archive is now available for public viewing.

Cazalet actively collected the Wodehouse material ever since PGW died in 1975. The archive spans over a century of material, from 1900 until 2005, and includes manuscript drafts and notebooks related to Wodehouse's fiction and nonfiction. Also included are material related to Wodehouse's film writing and significant correspondence with family and friends, inclusive of Evelyn Waugh and Ira Gershwin.

"It is a privilege for the British Library to take on the P.G. Wodehouse Archive, which will be an extremely valuable resource for researchers and for everyone with an interest in twentieth century literature," said Kathryn Johnson, Curator of Theatrical Archives and Manuscripts at the British Library.

Sir Edward Cazalet said of the loan, "I am so delighted that the British Library is to provide a home for my P.G. Wodehouse archive. Given that Wodehouse is now ranked as one of the leading, if not the leading, humourist authors of the 20th century writing in the English language, I believe that this broad-based collection will not only bring much pleasure and laughter to its readers but will also prove to be critical to any serious study of 20th century humour and literature."