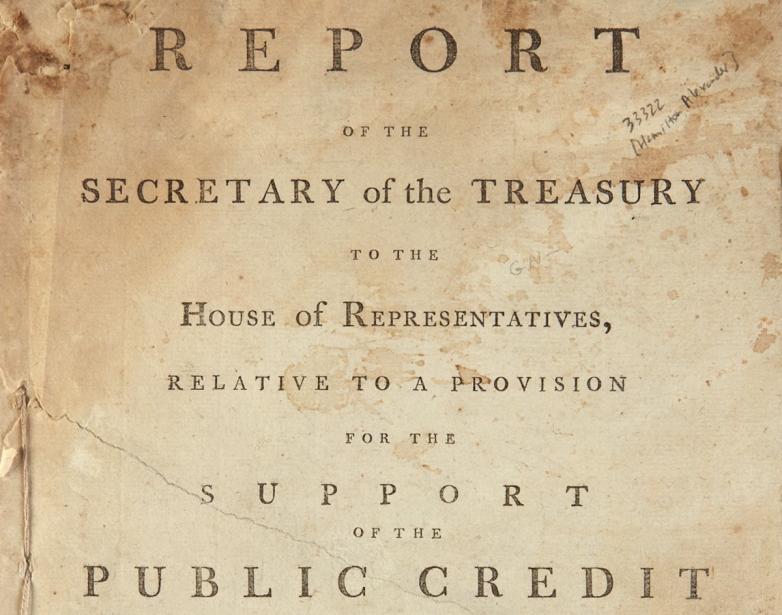 Report of the Secretary of the Treasury to the House of Representatives...1790, a first edition of Hamilton’s fundamental report that ushered in the financial revolution in the United States, achieved $81,900.

“I’m very happy with the result,” says Darren Winston, Head of Freeman’s Books and Manuscripts department. “Our department and the consignor both did our part, and we were able to congratulate one another on an excellent sale. The buyers that participated in the sale were a very dedicated and passionate group that were all determined to bring home a piece of American history—and we’re thrilled to have sold all lots offered, thanks to them.”

The auction, featuring significant documents, first-edition pamphlets, and autographed material, is a deep dive into the professional and personal life of the Founding Father and eminent American statesman amassed by John E. Herzog, a preeminent collector of financial documents of the 18th century and Federalist Era, and founder of the Museum of American Finance.

PUBLIC CREDIT MATERIAL SHINES
Documents pertaining to Hamilton’s work in the Treasury Department and negotiating public credit performed particularly well at Wednesday’s sale. Report of the Secretary of the Treasury to the House of Representatives...1790, a first edition of Hamilton’s fundamental report that ushered in the financial revolution in the United States, achieved $81,900 following a competitive bidding war (Lot 10; estimate: $30,000-50,000).

PRE-SALE ESTIMATES SHATTERED
Spirited bidding wars for nearly every lot pushed sale prices well above their estimates, as in the case of a Deferred Stock Certificate of the United States from the Panic of 1792, which sold at 17 times its pre-sale high estimate to achieve $44,100 (Lot 21; estimate: $1,500-2,500). An Ordinance for the Establishment of the Mint of the United States of America; and for Regulating the Value and Alloy of Coin sold for $32,760 following an estimate of $6,000-9,000 (Lot 3), and the Report from the Commissioners for Purchasing the Public Debt, which achieved $40,950, a five-fold outperformance of its pre-sale high estimate (Lot 27; estimate: $5,000-8,000).

ONGOING BOOKS AND MANUSCRIPTS SUCCESSES
Freeman’s Books and Manuscripts department has presented consistently excellent results, particularly in 2021; Freeman’s single-lot July 2021 sale of a rare copy of the Declaration of Independence, This Important State Paper, achieved $4.42M, the second-highest price ever paid for any copy of the Declaration of Independence, and the highest price ever paid for an American document printed in the 19th century.

UPCOMING AT FREEMAN’S
Freeman’s presents American Furniture, Folk and Decorative Arts on Wednesday, November 10, featuring a fine selection of silver, furniture, paintings, Flags, and objects illustrating the customs, politics, and design sensibilities of early America. The American National Flag Collection of Jeffrey Kenneth Kohn, MD consists of rare examples from one of the nation’s foremost experts in and dealers of the National Flag, presenting a unique opportunity for Flag collectors.