Tesla & Einstein Among Fine Autographs and Artifacts at Auction 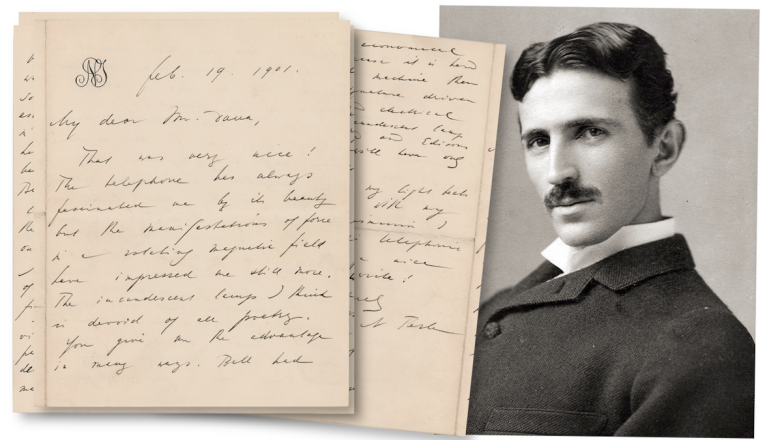 A four-page letter by Nikola Tesla commenting on his place amidst Edison and Bell. Estimate: $125,000

Boston — RR Auction's first sale of the new year brings over 1,000 rare and remarkable lots to the auction block!

Important historical items include a handwritten letter by Nikola Tesla commenting on his place amidst Edison and Bell. In this fascinating 4-page letter, Tesla observes his place within the hierarchy of America's great inventors of the era: while Bell and Edison stood on the shoulders of inventors who came before, he insists that he stands alone. Nevertheless, this incredible handwritten letter reveals Tesla's broad knowledge of scientific history in addition to his honest thoughts on contemporary inventors and their inventions. (Estimate: $125,000+)

Among other featured lots is the first honorary diploma awarded to Albert Einstein. The historic diploma awarded to Einstein by the University of Geneva for an honorary doctorate in physics, July 9, 1909, bearing printed signatures of University Rector Robert Chodat, Dean of the Faculty R. Gautier, and Senate Secretary Paul Moriand. (Estimate: $40,000+)

Also up is a rare letter from Queen Mary I to her husband's cousin; Queen of England and Ireland, from 1553 until her death, whose brutal persecution of Protestants earned her the nickname 'Bloody Mary'. The rare one-page in French, signed "votre bonne cousine, Marye," November 16, 1556. Letter to her cousin, the Duke of Savoy, relaying news and making a recommendation. Mary writes to Emmanuel Philibert, Duke of Savoy, the cousin of her husband, King Philip II of Spain. Philip had ascended to the Spanish throne at the beginning of 1556, making Mary queen consort of Habsburg Spain in addition to her position as Queen of England and Ireland. At one time, Queen Mary and King Philip had schemed to have Elizabeth Tudor marry the Duke of Savoy, thereby securing Catholic succession and preserving the Habsburg interest in England. However, Elizabeth refused to comply, and parliamentary consent was unlikely. After Mary's death in 1558, her re-establishment of Roman Catholicism was reversed by her younger half-sister and successor, the Protestant Queen Elizabeth I. (Estimate: $30,000+)

Another top lot is an oversized autographed Babe Ruth portrait. The beautiful vintage matte-finish photo of Babe Ruth in a three-quarter-length pose, wearing his New York Yankees uniform and holding for the camera in a post-swing stance, signed and inscribed. It is a brilliant portrait of the Great Bambino, accentuated by its bold handwriting and eye-pleasing clarity. (Estimate: $8,000+)

The sale also features an astounding assortment of rare and important stocks, bonds, and financial documents.

The Fine Autograph and Artifacts auction from RR Auction will conclude on January 12. For more information, go to www.rrauction.com.

RR Auction is a globally recognized and trusted auction house specializing in historical autographs and artifacts. Join us as we make history selling history in January 2022.