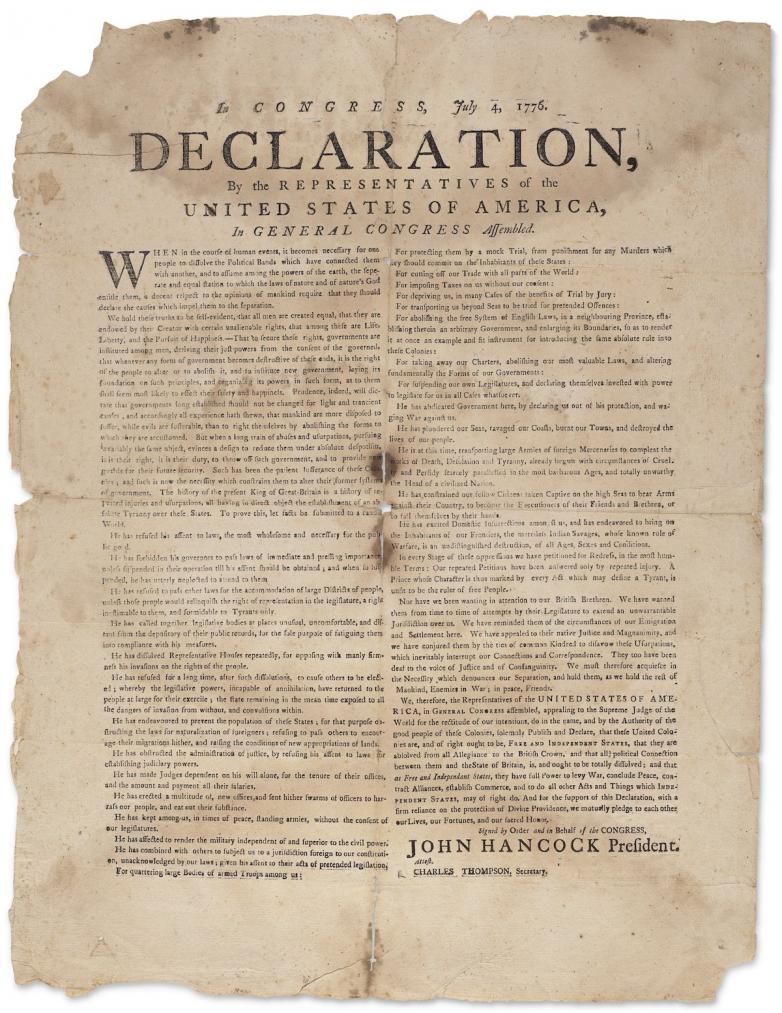 A rare contemporary broadside edition of the Declaration of Independence. Estimate: $600,000–800,000

Standout objects across the week of sales include a 1776 broadside edition of the Declaration of Independence (estimate: $600,000-800,000) as well as a fine copy of Paul Revere’s iconic engraving of the Boston Massacre (estimate: $200,000-300,000) from the Collection of Ambassador J. William Middendorf II; a Newport card table made by John Townsend (estimate: $150,000-250,000); a selection of works by Bill Traylor from The William Louis-Dreyfus Foundation and from the Collection of Jerry and Susan Lauren; and a pair of goose tureens and covers from the Tibor Collection (estimate: $125,000-175,000).

On January 21-22, In Praise of America: Important American Furniture, Folk Art, Silver, Prints and Broadsides features several distinguished collections including 35 lots from the singular collection of Ambassador J. William Middendorf II, which includes some of the most important documents and images documenting the history of the United States from its 17th century colonial origins through the American Revolution and the Founding Era. Highlighting the selection is a rare contemporary 1776 broadside edition of the Declaration of Independence (estimate: $600,000 – 800,000) as well as a fine copy of Paul Revere’s iconic engraving of the Boston Massacre (estimate: $200,000 – 300,000). These historical pillars—documents that helped fundamentally alter the course of history—are supported by a rich array of period broadsides and prints, objects that informed the world of their intended audience, while at times moving them to action. The objects in this selection not only help tell the rich and complex story of colonial and revolutionary America, they also help tell the story of those who produced them: the printers, engravers, painters, and writers on both sides of the Atlantic.

The Siegmund Collection of American Folk Art features 94 lots lovingly collected over a lifetime. All of Joanne and Fred Siegmund’s purchases were joint decisions except one surprise gift for Joanne’s 40th birthday: a pair of green Windsor chairs (estimate: $5,000-7,000). Joanne’s passion and commitment to the genre was recognized with her appointment to serve on the Board of Trustees at the American Folk Art Museum in New York. The Siegmund collection shows an appreciation of self-taught artistry and includes A Pair of Portraits: A Sea Captain and His Wife, Samuel Addison Shute, possibly in collaboration with his wife, Ruth (estimate: $30,000-50,000) and A Pair of Portraits: Mr. and Mrs. Moffet by John Usher Parsons (estimate: $15,000-30,000), as well as painted furniture, weathervanes and carved objects.

The robust Folk Art section includes portraits by Joshua Johnson and significant baskets by Dat So La Lee (estimates: $100,000 and $40,000-60,000). Also featured are thirty lots of early English ceramics from the Longridge Collection, including an important dated and initialed dish with a portrait of Charles II (estimate: $50,000-70,000).

The silver section encompasses works from the late 17th century through the 20th century, highlighted by The Governor Gurdon Saltonstall Basin, an Important American Silver Basin by Jeremiah Dummer (estimate: $30,000-50,000) and an 1876 Philadelphia Centennial International Exhibition: A Monumental American Silver-Plated Centerpiece Epergne (estimate: $10,000-20,000). A selection of Tiffany is led by a set of 12 American 18-Karat after dinner coffee cups, saucers and spoons and an American silver and mixed-metal vase (estimate: $10,000-15,000). The section is further anchored by the collection of Mary M. and Robert M. Montgomery Jr. which includes eight lots of Gorham silver from their Art Nouveau Martelé line.