Chicago — Potter & Potter Auctions is pleased to announce this 600+ lot sale to be held on Saturday, April 24th starting at 10am CDT. Given current public health regulations, the event will be held entirely online and live streamed from the company's gallery, newly relocated to 5001 W. Belmont Ave., Chicago, IL 60641. All bidding will take place through the company's website at www.potterauctions.com. Phone and absentee bids are also welcome. All items are available for in-person preview now, by appointment only.

Premier, 20th and early 21st century illusions, ideal for collectors as well as stage production, take a starring role in this sale. Several of note by West Richland of Wolf's Magic include:

Other fine selections include:

•    Lot #205, an Okito Hand Chopper made in Chicago in the 1940s, is estimated at $1,200-2,400. In this uncommon, visually stunning trick, the threatening blade of an ornate miniature guillotine passes through a spectator’s wrist without harm.
•    Lot #213, a marked checker cabinet made in Las Vegas by Okito-Nielsen in the 1990s, is estimated at $2,5000-5,000. This classic transposition effect involves a stack of checkers and a short glass tumbler, which magically travel between one of three compartments in a magnificently decorated temple-like cabinet and a matching decorated cover.
•    Lot #50, the Jewel Chest Mystery by Bob Kline of Indiana, PA, is estimated at $3,000-6,000. Only one of three units produced, this c. 1985 illusion is Kline’s version of Okito’s Mandarin’s Dream. Here, four “jewel boxes” appear in a large cabinet and are magically transposed with a Geisha-type doll covered by an ornate tube, resting on a table some distance away.

•    Lot #561, a simple and elegant stone lithograph for the Marvelous Chinese Conjurer, is estimated at $5,000-8,000. Printed by Horrocks & Co. around 1910,  this linen backed example features the magician in a pensive pose, one hand to his brow while seated in a pagoda, looking out on a tranquil lake scene.
•    Lot #562, a rare, linen backed poster depicting the magician firing a ribbon into a target, through the torso of a female assistant, is estimated at $4,000-6,000. It was printed in Birmingham by James Upton around 1910.
•    Lot #653,  a linen backed, color stone lithograph featuring the magician with a sword, standing proudly at the peak of success, is estimated at $4,000-6,000. It was printed in London by J. Weiner Ltd. around 1915 and has a Li Sing Foo over-print. 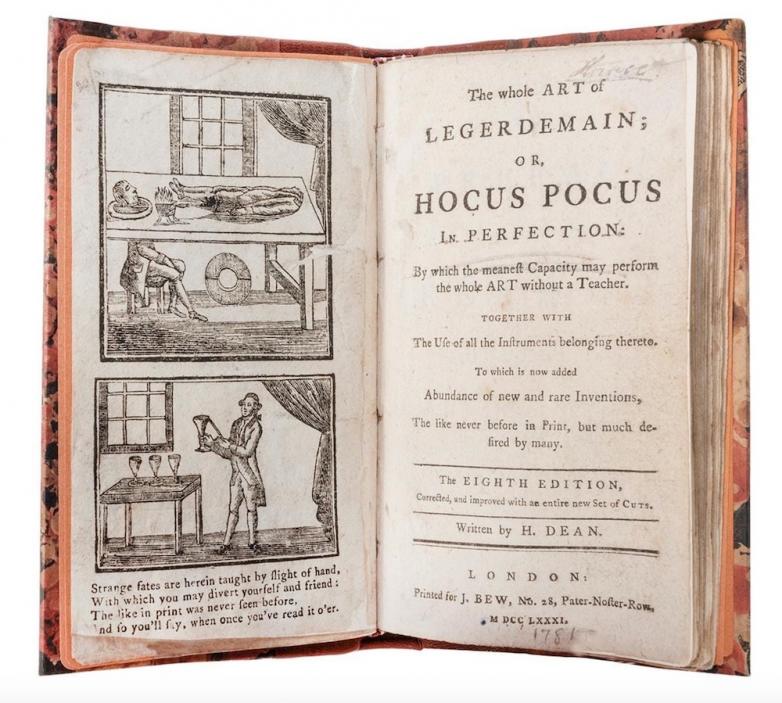 Important, century spanning magic and conjuring publications are certain to conjure up enormous interest at this can't-miss sales event.

•    Lot #475, Henri Decremps' The Conjurer Unmasked, is estimated at $3,000-5,000. Printed in London by T. Denton, et al in 1785, this is the first edition of Decremps’ La Magie Blanche Devoilee in English. This rare tome is only the second copy to trade hands at auction and includes the bookplate of Dr. John Henry Grossman.
•    Lot #482, Robert Albo's Classic Magic Series, Vols. 1 – 11, is estimated at $2,500-3,500. These were published in San Francisco from 1973 – 2005 and are illustrated with numerous drawings and color plates. Each volume is from a limited, numbered edition; several volumes are signed by Albo himself.
•    Lot #474, Henry Dean's The Whole Art of Legerdemain; or Hocus Pocus in Perfection, is estimated at $2,000-3,000. This eighth edition was published in London by J. Bew in 1781. It features a woodcut frontispiece, woodcut in-text conjuring illustrations, and the ownership signature of a Horace Brotherton, dated 1873, to the front flyleaf.

Also available through this sale is a finely curated offering of magicana ephemera, including letters, business cards, photographs, autographs, and other paper based items of interest.

•    Lot #601, a typed, signed letter from Harry Houdini  to Richard Van Dien, the secretary of the Society of American Magicians, is estimated at $2,000-3,000. Sent from New York and dated June 14th, 1921, this one page example - with a bold signature -  notes Houdini thanking Van Dien for his gift of a “ship load” of pencils.
•    Lot #602, Harry Houdini's Society of American Magicians business card from the 1920s, is estimated at $500-750. This pictorial gilt-foil example for Houdini as “Illustrious President” of this organization is extremely rare and only the second one offered through Potter & Potter Auctions; in August, 2017 the company sold one for $1,800.
•    Lot #616, John Henry Grossman’s collection of magicians’ throw-out and business cards, is estimated at $500-700. This archive includes about 225 pieces altogether, organized in a zippered album monogrammed “JHG” on the cover. Some are signed. Performers include Lightner the Wizard, Ducrot, Silent Mora, Silent Maurice, Al Flosso, Pierson, Willard, John Grdina, Li Chung Soo, Harry Lorayne, Virgil Anjos, and many others.

•    Lot #468, a fully provenanced silver tipped wand used by Okito in Holland, is estimated at $3,000-6,000. Before Okito’s immigrated to the US, he gave magic lessons. His top student was Coenraad F.A. Moorrees. As a token of friendship, Okito had the silver tips engraved and presented the wand to Moorrees before leaving Holland in the late 1930s.
•    Lot #469, a L&L Publishing studio table, made in Connecticut by Jim Zee in the 1980s, is estimated at $3,000-6,000. A centerpiece of many L&L-produced videos that gained popularity in the 1990s, this table is prominently featured in the performances of Johnny Thompson, Michael Ammar, Alex Elmsley, Bill Malone, Jeff McBride, Max Maven, Tommy Wonder, and countless others.
•    Lot #470, Harry Blackstone's signed and stage-used white cotton Dancing Handkerchief, is estimated at $700-1,000.  It is presented in a frame together with a photo of the magician and letter of provenance by Clint Riedel of Riedel Magic, stating that during a performance at the Hershey Theatre in PA, he loaned the handkerchief to Blackstone, who then used it in his famous routine, and signed it backstage following the show.

According to Gabe Fajuri, President at Potter & Potter Auctions, "This astonishing array of modern magic props is the first auction of its type to come to the market at auction - at least of this size. While we have focused our magic sales on vintage and antiquarian material, Bill Trotter assembled a collection that is perhaps unique in that it contains representative samples of contemporary props made in limited quantities, and then some. I know of no other individual who has curated such a complete and impressive collection, and am thrilled to be bringing it to market. Oh, and this is only part one of our offerings from Bill's collection. The second selection will come to an auction block near you, and soon."