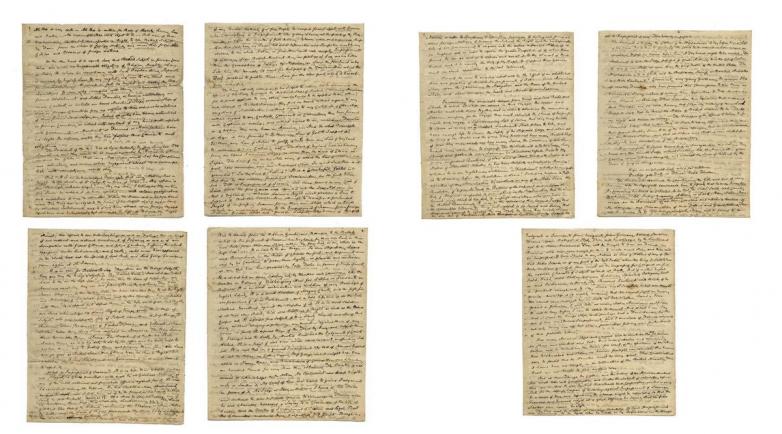 Westport, CT – A four-page manuscript consisting of nearly 2,300 words written entirely in the hand of English physicist Sir Isaac Newton, a World War II-dated letter written in English by Albert Einstein in which he reveals that Nazi leaders didn’t give much thought to his Theory of Relativity, and a 16-page letter signed by John Adams regarding British abuses eight years after his presidency ended, are just a sampling of what’s in University Archives’ next online auction planned for January 6th.

The full catalog, showing all 440 lots, is up for bidding and viewing now, on the revamped University Archives website (www.UniversityArchives.com), as well as on the popular platforms LiveAuctioneers.com, Invaluable.com and Auctionzip.com. Phone and absentee bids will also be accepted. The sale contains rare and highly collectible items from multiple specialty categories.

These include literary (Chekhov, Dickens, Hemingway, Solzhenitsyn and others); presidential (Washington, Jefferson, Lincoln, Kennedy and others); foreign (Napoleon, Khrushchev, Victoria I and others); science (Einstein, Darwin, Newton, Freud and others); and space (Apollo XI, Neil Armstrong, cosmonauts and the Wright Brothers). It will be University Archives’ biggest sale to date.

“We keep breaking our own records at University Archives,” said company founder and president John Reznikoff. “When we had our largest-ever 349-lot sale back in August, we didn’t expect to break that record, but just four months later, here we are, with a 440-lot extravaganza of amazing and unusual autographs, historical documents, rare books, manuscripts, collectibles, relics, coins and currency. We invite collectors everywhere to ring in the New Year with us.”

In the Sir Isaac Newton manuscript, written around 1710, the legendary physicist seeks inspiration from the Kabbalah, early Christian philosophers and biblical texts to connect metaphysics to physics, thus uniting the abstract world with the concrete world he had partly decoded by discovering gravity. The length and subject matter of this manuscript, along with its outstanding provenance, make this an exceptional find. It has an estimate of $130,000-$160,000.

There are nine lots relating to Einstein, including two typed letters and two autograph letters signed by him. In the World War II-dated letter, he wrote, “My first manuscript about relativity was not burned by the Nazis. I myself threw it into the waste-basket after it was printed judging it was good for nothing” (est. $75,000-$80,000).  A letter written in German discussing his Unified Field Theory and the behavior of matter in space and in motion was penned the year of his death.

The 16-page letter signed by John Adams is quite possibly the longest letter by Adams in private hands. In it, he opines about the state of current political affairs eight years after his presidency ended. Adams also excoriates British policies undermining American sovereignty--like the impressment of American sailors--and also lends support to his erstwhile political rival Thomas Jefferson, who was nearing the end of his own second presidential term (est. $70,000-$80,000).

A one-page letter written and signed by Thomas Jefferson to his cousin George, regarding the plantation business (“I am very sensible of your kindness in having gone beyond my draughts, which I by no means intended”) should bring $5,000-$6,000. Also, a two-page Revolutionary War-dated letter signed by George Washington, commenting on the courage of Patriot troops during the ongoing Battle of Yorktown, is expected to bring $24,000-$26,000.

Staying in the era, a four-page letter written and signed in 1759 by the Scottish economist and philosopher Adam Smith, discoursing on the inculcation of financial and moral responsibility, and other money matters, should realize $60,000-$70,000; while one page of a bifolium, dated Feb. 17, 1795 and signed twice in the third person by Alexander Hamilton, as he prepares to move back to New York after vacating his cabinet post, is expected to rise to $3,000-$3,500.

A Charles Darwin three-page autograph letter dated Dec. 26, 1876 and signed, referring to his beloved friend and mentor, Scottish geologist Sir Charles Lyell, is significant and enhanced by a desirable full signature (est. $6,000-$7,000). Also offered will be a generous lock (50+ strands) of hair belonging to the French Emperor Napoleon Bonaparte, accompanied by a piece of paper inscribed, “1819 / Napoleon’s Hair / from “Mr. Captain and Capt. Nagle” (est. $5,000-$6,000).

A Civil War-dated military commission signed by Abraham Lincoln for a veteran officer of the battles of Fredericksburg, Chancellorsville, and Gettysburg, who would succumb to war injuries in May 1867, has an estimate of $6,000-$7,000. British leader Winston Churchill, tasked with demobilizing military forces after World War I, sent a typed letter signed to the Prime Minister of the Union of South Africa, regarding black soldiers in 1919. It should garner $3,000-$3,500.

A three-page letter signed by Lee Harvey Oswald as “Your Brother / Lee” sent from the Soviet Union in the spring of 1961, should also be of interest. In it, Lee promises to return to the United States “if I can get the government to drop charges against me” (est. $5,000-$6,000). Jackie Kennedy, as a 16-year-old high school boarding student at Miss Porter’s School in Farmington, Conn., has doodled a heart and dedicated a vintage black and white photograph to a chum named Betty (est. $1,500-$1,700).

A lightly shellacked D&M baseball from the 1920s, signed by many of the era’s brightest stars (including Babe Ruth, Lou Gehrig, Ty Cobb, Tris Speaker, Lefty Grove and Al Simmons), with an LOA from James Spence, LLC, is estimated to bring $6,000-$7,000. Also, a large, original signed drawing by Shel Silverstein, of a character called “Runny Babbit”, used for a 2005 book of poetry by the author-entertainer, plus a rare signed contract, should finish at $3,000-$4,000.