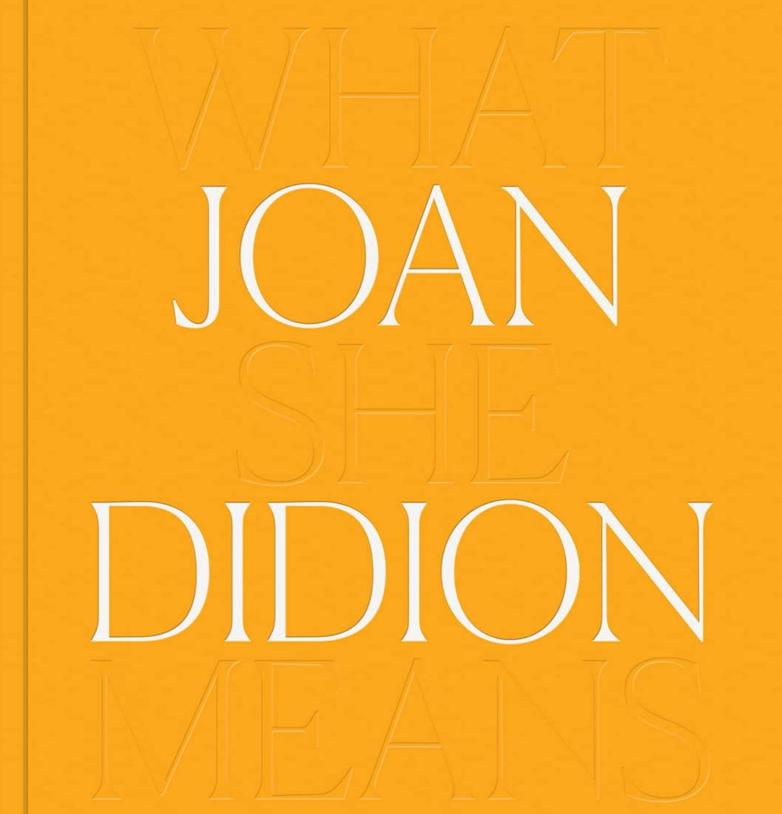 Catalogue for Joan Didion: What She Means exhibition

Opening less than a year after her death at age 87, Joan Didion: What She Means was first planned in 2019, with Didion’s blessing. The exhibition grapples with the evolution of Didion’s singular voice as a writer, observer of place and family, and chronicler of our times. Prior to Joan Didion: What She Means, Als had previously organized similar portrait exhibitions inspired by writers James Baldwin (2019) and Toni Morrison (2022), both at David Zwirner Gallery in New York. This will be his first such exhibition in Los Angeles.

Director of the Hammer Museum Ann Philbin notes, “Joan Didion: What She Means is both a beautiful tribute and a moving portrait of the brilliant writer. Hilton Als approached us with the idea, which was born out of his long engagement with Joan Didion’s writing as well as his personal relationship with her. They were in dialogue before Joan’s passing in 2021, and she was enthusiastic and trusting of Hilton’s curatorial approach.”

Als imparts, “Processing Joan Didion’s life and works by following connective threads between words, art, and objects was an affirming experience. It’s a real pleasure to observe a beloved writer and her works, noticing new details and appreciating again the genius of Joan.” The exhibition closely follows Didion’s life according to the places she called home and is laid out in chronological chapters:

Born in Sacramento in 1934, Didion graduated with a degree in English from the University of California, Berkeley, in 1956. The first section of the exhibition, “Holy Water: Sacramento, Berkeley (1934–1956),” begins with Didion’s history—including family artifacts and maps of Sacramento—and juxtaposes art that underlines ideas about fluidity, water, and movement with the arid landscape and blinding sun of California’s central valley. Pat Steir’s painting Water Fall (1981) and Maren Hassinger’s sculpture River (1972/2011) cohabitate with Vija Celmins‘s meditative drawing Untitled (Double Desert) and Chiura Obata’s intimate prints capturing the light and solitude of the dry valley, the contested landscape of the Japanese internment in California. A moving image of the first close-up of John Wayne, who had a formidable influence on Didion, from John Ford’s classic 1939 Western film Stagecoach, is also included in this section as well as an early painting by Sacramento-born Wayne Thiebaud.

Shortly after graduating from Berkeley, Didion moved to New York having won Vogue’s twenty-first Prix de Paris, a contest sponsored by the magazine that enabled the young writer to work as a copy writer and junior editor. “Goodbye to All That: New York (1956–1963)” tracks Didion’s formative early years as a writer experiencing New York for the first time. Didion began to find her voice while working at magazines and in 1963 she published her first novel, Run River. This section includes copies of Vogue that feature Didion’s movie reviews and personal essays. Works by a number of “New York School” photographers, including Diane Arbus, Garry Winogrand, Richard Avedon, and Irving Penn, are contrasted with paintings by Silke Otto Knapp and Andy Warhol, along with the lesser-known artist John Koch—whose paintings encapsulate both the old New York that Didion encountered when she arrived in 1956 and the post-Eisenhower culture that inexorably changed it. A luminous painting by Helen Lundeberg of her studio intimates Didion’s reverence for the Californian light, as expressed through her writing, and her longing for this light while living in New York City.

By the mid-1960s Didion moved back to California, this time settling in Los Angeles with her husband John Gregory Dunne. The couple had married in 1964. “The White Album: California, Hawai‘i (1964–1988)” covers this long period of social and political awakening for Didion. California was on the brink of great social changes because of racial and sexual politics, the changing movie studio system, and the emergence of the writer in society as a political figure. The Didion-Dunnes, as they were often referred to, wrote a number of screenplays, including The Panic in Needle Park (1971) and the second remake of A Star is Born (1976). While in Los Angeles, Didion published her groundbreaking collections: Slouching Towards Bethlehem (1968), The White Album (1979), her classic “Hollywood” novel, Play It As It Lays (1970), and what Als believes to be her strongest, most evocative novel, A Book of Common Prayer (1977).

During this time, Didion also published book-length essays on El Salvador (1983) and Miami (1987). And even without an entire book dedicated to Didion’s self-professed “eccentric amount of time [spent] in Honolulu,” her sojourns to the Royal Hawaiian Hotel were foundational to how she imaged American culture in words. All of these literary threads are represented in the exhibition with first edition copies, original manuscripts, and historical photographs that bear the notes of the writer’s thinking and process. This section also includes works by Noah Purifoy, Ed Ruscha, and Betye Saar—whose assemblage sculpture View from the Palmist Window (1966) is part of a group of works on the occult and alternative consciousness movement so prevalent in California during these years following the Manson murders and violent events at Altamont Speedway Free Festival in 1969.

In 1988 Didion moved back to New York with her husband; their daughter, Quintana Roo, had settled in town some time before. On her return, Didion began to write about life in the city for the New York Review of Books, including her devastating report on the Central Park Five. The works seen in this final section of the show, called “Sentimental Journeys: New York, Miami, San Salvador (1988–2021),” further illuminate Didion’s exceptional view not only of Manhattan, but of Latin America. Dominique Nabokov’s large black-and-white photograph (and cover of After Henry, Didion’s 1992 book of essays) of a distant jogger in Central Park is paired with Frederick Olmsted’s plans for the park. This section also includes Ana Mendieta’s Untitled (from the Sileuta Series) (1976), nine color chromogenic prints that show a body’s imprint in sand, which disappears as the sand shifts beneath the waves or is filled further with water.

In 2003 Didion’s husband died, and her daughter tragically passed in 2005. There are two resulting books from these experiences: The Year of Magical Thinking (2005), one of the most profoundly riveting and moving accounts of grief in contemporary literature, and Blue Nights (2011), which was later adapted for the stage. After publishing the latter, Didion was more or less retired and remained in New York until her death in December 2021.

CATALOGUE Joan Didion: What She Means will be accompanied by an illustrated catalogue published by the Hammer Museum and Prestel/DelMonico. The catalogue will follow the four chapters that frame the exhibition. These chapters are fleshed out in the publication with archival ephemera, three little-known essays by Joan Didion anthologized together for the first time, and images many of the exhibited artworks alongside a new essay by curator and writer Hilton Als.

PUBLIC PROGRAMS The exhibition will be accompanied by a range of public programs that amplify the work and life of Joan Didion, including a film series that explores Didion’s role as a screenwriter, fiction novelist, and essayists working through the evolution of media reportage in 1960s and 1970s. Screenings will include the films for which Didion was screenwriter, but also classics by John Ford and documentaries by the Maysles brothers.