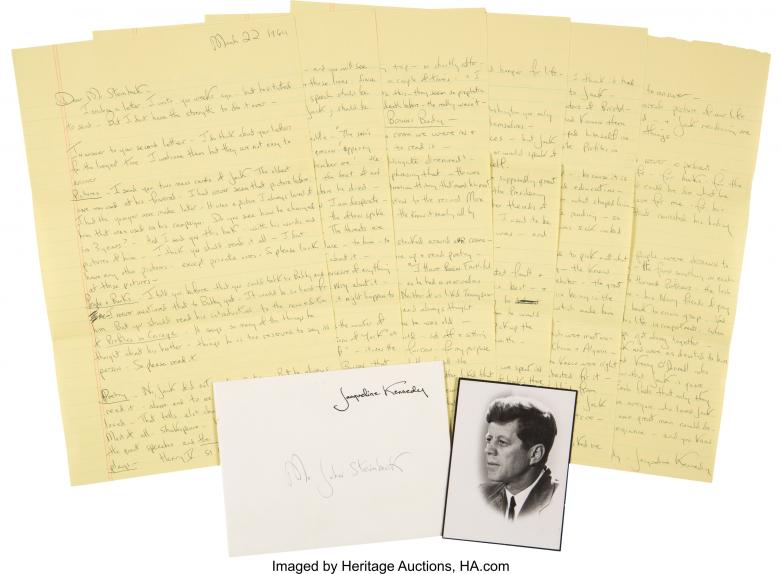 The final price for Jacqueline Kennedy Autograph Letter Signed "Jacqueline Kennedy" was 7.5 times the pre-auction estimate of $2,500+. The six-page handwritten later, dated March 22, 1964, was written by Kennedy to Steinbeck. In it, she answered questions about her late husband, former president John F. Kennedy. The questions are believed to have been meant for inclusion in a JFK biography that Steinbeck never ended up writing.

Another Jacqueline Kennedy Autograph Letter Signed raced past its pre-auction estimate of $2,000+ when it drew bids from a dozen collectors, closing at $17,500. In the six-page letter, she described to Steinbeck her desire to write, or at least help someone else write, an autobiography of her late husband. The Steinbecks were in Europe when they learned John F. Kennedy had been assassinated; upon their return, JFK’s widow asked John Steinbeck to write her husband’s biography – a request he ultimately declined.

A John Steinbeck 1946-1947 Warm Up Journal, which the author described as “one of those interminable notebooks that serves no purpose but to warm me up and sometimes cool me down” also brought $17,500.  Dated from November 1946 through June 1947 and written in both ink and pencil, the journal is approximately one-third full, with 103 of 300 pages used. The journal reveals insights into the author's mind while he worked on The Wayward Bus, his (ultimately scrapped) play The Last Joan and other various projects.