Historic Letter From Washington to Jefferson Goes For $2.4m 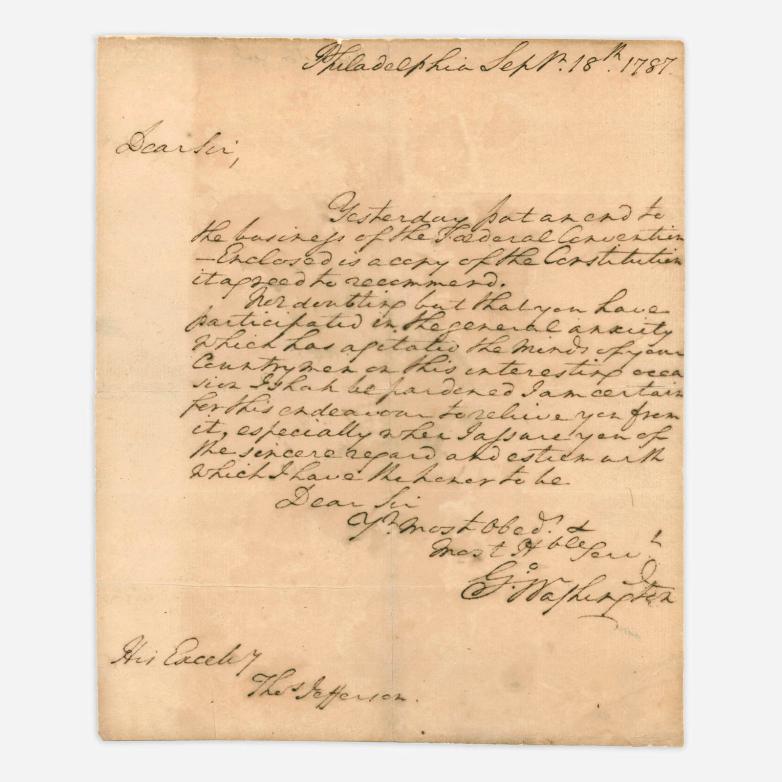 George Washington's  personal letter to Thomas Jefferson: "a critical piece of correspondence between two of the nation’s founders"

“We’re thrilled by the sale of Washington’s letter to Jefferson, and so is the consignor,”says Darren Winston, Head of Freeman’s Books and Manuscripts department. “It’s always really exciting to bring rare documents like this to market, but especially—as in this case—when the letter is so deeply connected to the founding of the nation.”

At the time of the Constitution’s signing, Jefferson, who authored the Declaration of Independence, was representing America in France. The Constitutional Convention was sworn to secrecy in the summer of 1787, but Washington was eager to pass the news along to Jeffersonas soon as the landmark document was signed. In this way, the letter not only reflects the high regard in which Washington held Jefferson, it also provides a critical link between two of the nation’s founders and offers a window into a world where breaking news could take weeks or months to arrive.

The remarkable sale, held in the midst of American election season, confirms Freeman’s pride of place in bringing foundational early American letters and documents to market.The $2.4m sale of this rare letter is one of a series of Freeman’s recent successes presenting such material at auction, including the $1.8m sale of a 1776 letter announcing America’s independence, to the state of Georgia, signed by John Hancock and the $4.42m sale of a rare copy of the Declaration of Independence, in 2021.