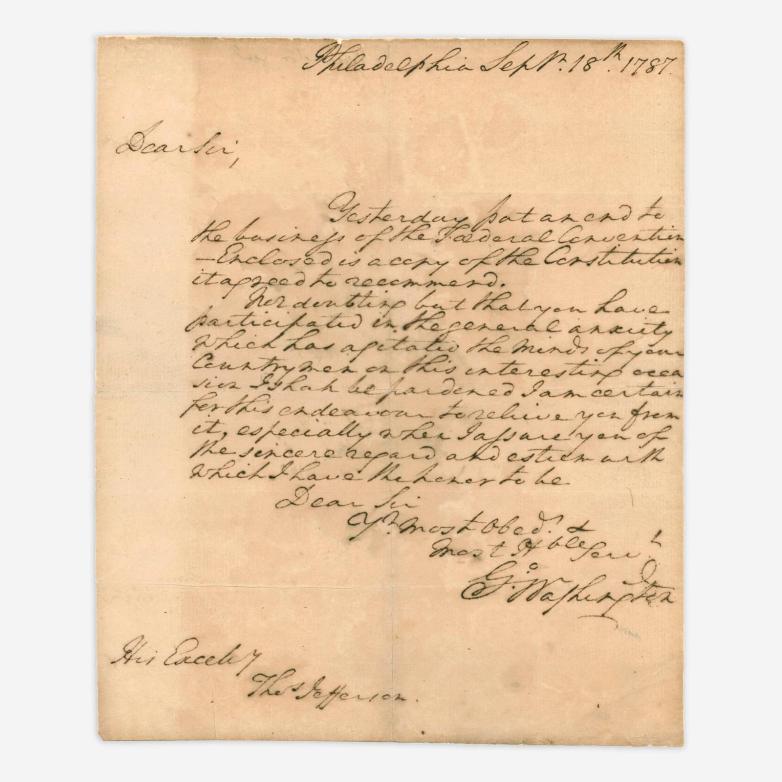 Philadelphia - The day following the Constitution’s completion and signing, George Washington sent a copy of the landmark document to Thomas Jefferson, along with this personal letter. The letter will be offered in Freeman’s November 15 Books and Manuscripts: Rare Americana auction (Lot 14; estimate: $1,000,000-1,500,000).

Why wasn’t the author of the Declaration of Independence back in Philadelphia to help write the Constitution? At the time, he was representing America in France. From the moment the Constitutional Convention, with Washington at its head, swore itself to secrecy in the summer of 1787, Jefferson had been left in the dark.

Washington was eager to be the first to break the silence, confirming to Jefferson the significance of the moment. “Yesterday put an end to the business of the Foederal Convention – Enclosed is a copy of the Constitution it agreed to recommend. Not doubting but that you have participated in the general anxiety which has agitated the minds of your Countrymen on this interesting occasion,” wrote Washington. “I shall be pardened I am certain for this endeavour to relieve you from it.”

Darren Winston, Head of Freeman’s Books and Manuscripts department, says, “This letter provides a critical link between two of the nation’s founders, and a window into a world where breaking news could take weeks or months to arrive. We’re especially happy to be able to offer Washington’s Constitution letter as well as Jefferson’s letter documenting its provenance” (Lot 15; estimate: $80,000-120,000). Responding to an educator, Jefferson quotes from Ecclesiastes, Cicero and Horace to reflect on freedom, wisdom, and happiness—and sends his letter—along with the George Washington letter—as a gift to inspire students.

The copy of the Constitution that Washington enclosed wasn’t mentioned in Jefferson’s 1816 letter. Of the 500 copies printed at the end of the convention on September 17-18, 1787, only 13 are known to survive. One of the two known remaining in private hands is coming up at Sotheby’s this December, estimated at $20,000,000 to $30,000,000.
Freeman’s November 15 Books and Manuscripts: Rare Americana auction also includes an exceptionally rare copy of the Constitution. The Pennsylvania Herald, and General Advertiser is the only newspaper to print it on September 20, 1787, and is also the only one that month to show the entire Constitution on one side of the paper (Lot 16; estimate: $100,000-150,000).