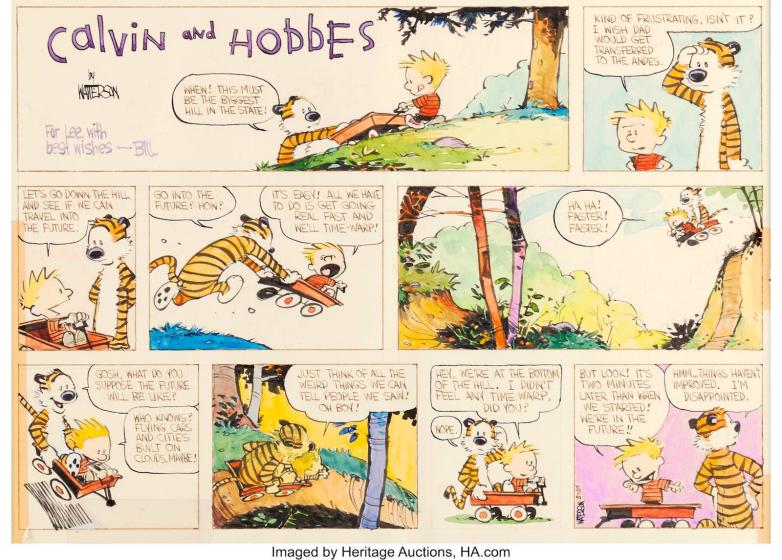 Dallas – A hand-colored Calvin and Hobbes Sunday strip from May 24, 1987, sold for $480,000 at Heritage Auctions to set a new auction record for Bill Watterson and his beloved creations. That price also ties the record for the most valuable original newspaper strip ever sold at auction.

This was only the second hand-colored Sunday strip by Watterson ever to appear at auction. It shatters the previous Calvin and Hobbes auction record set in September, when Heritage sold a February 1992 hand-colored daily strip – signed by Watterson to his friend and Doonesbury creator Garry Trudeau – for $216,000.

Only one other original comic strip has ever realized $480,000: Alex Raymond's very first Flash Gordon, published on Jan. 7, 1934. Calvin, the owner of a lucky pair of rocket-ship underpants, would be proud to join that company.

A second Calvin and Hobbes illustration, also from Salem's collection, sold Thursday for $120,000.

"All of us here, and every collector we've talked to, feels Calvin and Hobbes is at the very top of the entire history of newspaper-strip art, so it's very gratifying to see the final prices reflect that," says Heritage Auctions' Vice President Todd Hignite. "Not only were these extraordinary works, but they belonged to the man who discovered and nurtured Watterson, and we're thrilled we could represent Watterson and Lee Salem's family in this history-making sale."

As Hobbes once said, "Van Gogh would've sold more than one painting if he'd put tigers in them."

The 1987 Sunday strip that sold Thursday is quintessential Calvin and Hobbes, beginning with the boy and his best friend perched atop a hill, hoping their red wagon will hurtle them into a time warp and a future filled with "flying cars and cities built on clouds, maybe!" Calvin, forever the only child looking for a way to escape into a different time or a better, more exciting place, instead finds himself at the bottom of the hill – two minutes into the future, better than nothing. "Things haven't improved," says Hobbes. "I'm disappointed."

Watterson left a note in the title panel for his editor: "For Lee with best wishes — BILL."

The second work is an unpublished one-panel specialty piece in which Calvin and Hobbes sit back-to-back reading newspapers, an image that now seems a throwback to a faraway moment. Hobbes laments, "It's tragic that we have adult illiteracy in this country," to which Calvin responds, "I'll say. Think of all the important things in life people miss if they can't read!" The boy holds a paper bearing such headlines as "Woman Weds Space Alien Elvis Clone" and "Fergie and Di Brawl in Bronx."

Watterson drew this in 1988. It remains as timely as tomorrow.

During the auction's first 90 minutes Thursday, 66 lots of comic books and comic art realized $5,569,200, with a Batman comic book also shattering its previous record. A copy of Detective Comics No. 168 graded CGC Near-Mint 9.4 realized $324,000. That smashes the previous highwater mark for the book that tells the origin story of The Joker, who's clearly having the last laugh now.