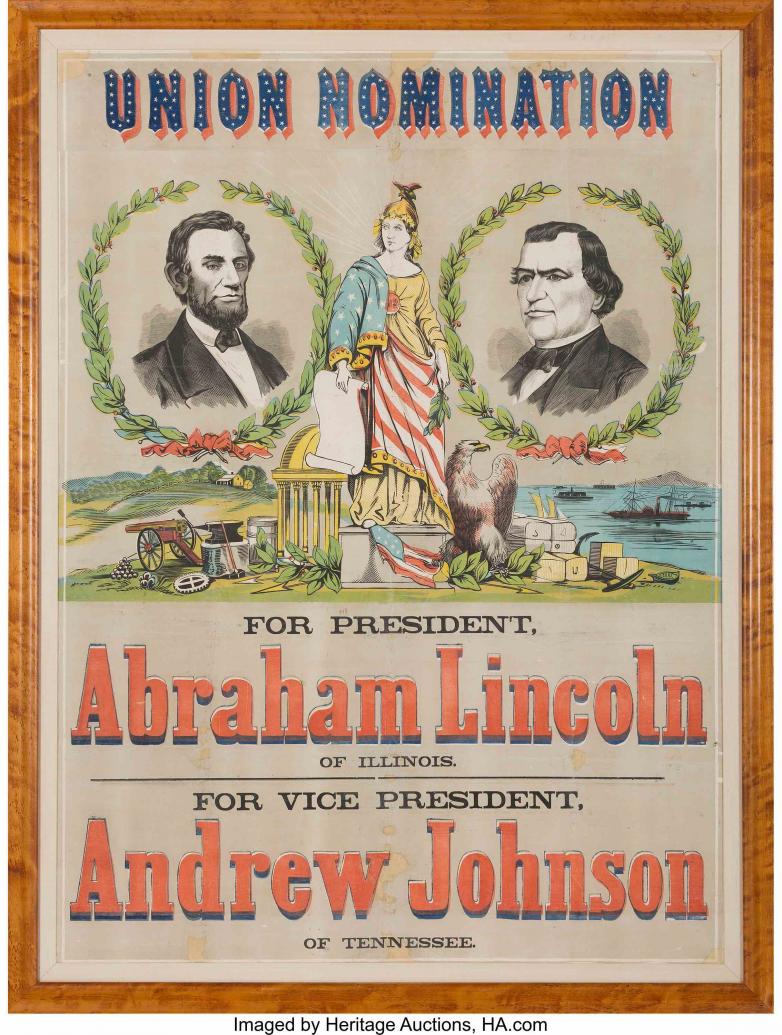 A poster from Abraham Lincoln’s 1864 presidential campaign set a record for the most ever paid for a political poster when it sold for $250,000.

Dallas, TX – A massive jugate poster from Abraham Lincoln’s 1864 presidential campaign set a record for the most ever paid for a political poster when it sold for $250,000 to push the final total for Heritage Auctions’ Lincoln and His Times Americana & Political Auction to $1,853,301.

The Lincoln & Johnson: Awesome, Mammoth 1864 Jugate Campaign Poster, which also established a new standard for any Lincoln campaign item, is massive – it measures 41 inches wide by 54 inches high – and spectacular, one of just three known examples of what is considered the finest campaign display item for the 16th President. It features 12-inch portraits of both Lincoln and Andrew Johnson, his Vice Presidential candidate and eventual successor as President. The demand for the poster allowed it to race far beyond its pre-auction estimate of $100,000+.

“This poster is simply stunning, and an unquestioned rarity that commanded the attention of serious collectors of American Political and Abraham Lincoln memorabilia,” Heritage Auctions Americana Director Tom Slater said. “There are only two others known to exist, and one is in the New York Historical Society. This poster is the ultimate Lincoln display item, a lot that immediately becomes the centerpiece of an elite Lincoln or political collection.”

Multiple bids also poured in for Abraham Lincoln: A Highly Important, Seminal 1858 Political Letter, Ex: Malcolm Forbes, Jr. Collection until it realized $225,000. The letter was sent by Lincoln when he was a U.S. Senator from Illinois to Henry Asbury of Springfield, Illinois. A virtual unknown outside of Sangamon County, Lincoln was campaigning to unseat Stephen A. Douglas in 1858, and was urged by Asbury to pin down Douglas on the issue of the extension of slavery in the territories. Lincoln’s political savvy in trying to frame the issues of the campaign was nothing short of brilliant. Douglas’ response, known as the Freeport Doctrine, claimed to take “no moral position” on slavery while admitting of the necessity of local police authority to enforce the practice… positions which managed to alienate anti-slavery voters and slavery advocates at the same time. While Douglas won re-election to the Senate, the Freeport Doctrine undermined his chances in the 1860 presidential election which Lincoln handily won

The only known example of the Finest And Rarest Texas General's Grade Houston-Made Confederate Sword finished at $93,750. This custom weapon has a blade styled after the famous 18th-century Turkish blades, making it unique among Confederate swords. Patterned after a “Kilij,” the blade is fashioned in a manner designed to significantly increase the sword’s cutting power. Signed on the ricasso by Confederate sword maker “J.C. Wilson, Houston,” this is one of only three known maker-marked Wilson swords known to exist.

[United States Sanitary Commission]: Autograph Album Sold at New York Metropolitan Fair to Benefit Wounded Soldiers, Including Note Signed by Abraham Lincoln topped its pre-auction estimate by more than 50% when it closed at $68,750. This extensive scrapbook was sold in April 1864 at the Metropolitan Fair in New York City, a public event organized by the United States Sanitary Commission to raise funds to treat wounded and disabled Union soldiers. The album includes approximately 150 autographs, some with inscriptions, quotations, notes and drawings, by politicians, generals, artists and writers, primarily from the Civil War era (most written between 1861 and 1864). Also included are two small fragments from the Confederate flag that flew over Georgia’s Fort Pulaski which was torn down by Union soldiers under the command of General Egbert Ludovicus Viele.

Abraham Lincoln: A Wonderful Signed Carte de Visite Photo, Thrice Authenticated, which brought $62,500, is another in the always-popular category of signed photos. This “inkwell pose” was taken by famed Lincoln photographer Mathew Brady shortly after Lincoln assumed the presidency. With a “certification” on the reverse by John Hay, Lincoln’s personal secretary, the lot was sold along with a letter of authentication by autograph expert Charles Hamilton.