Astronomicum Caesareum, One of the Most Stunning Books of the 1500s, Heads to Auction 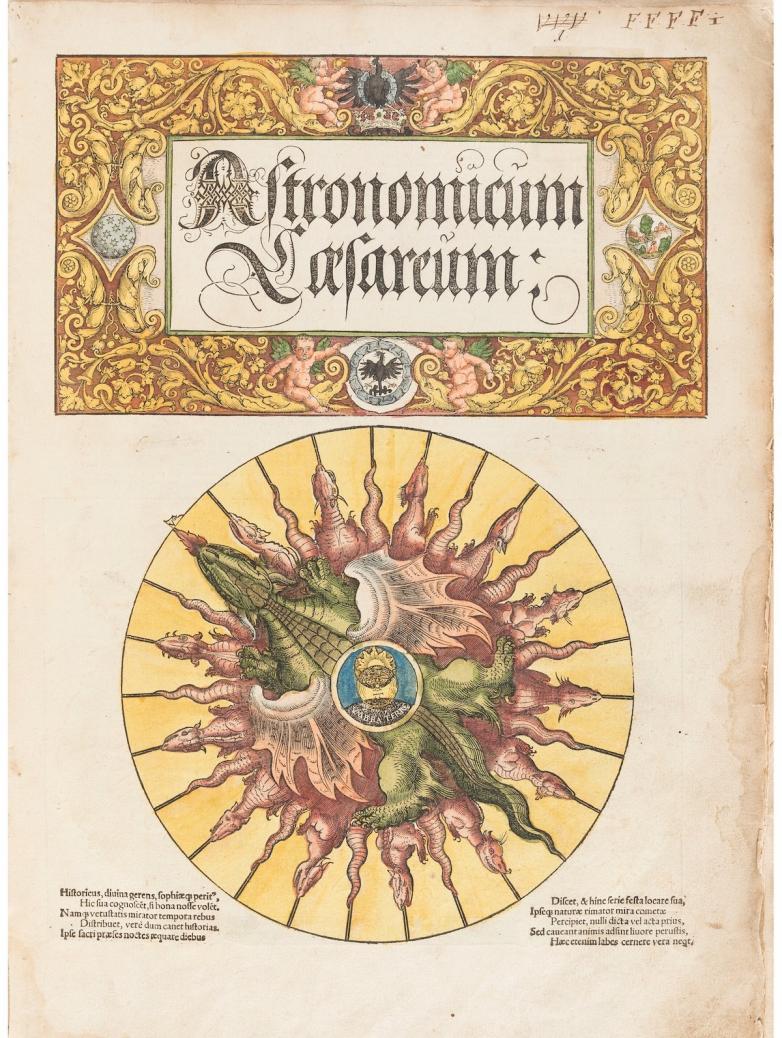 Dallas, TX – “The most spectacular contribution of the book-maker's art to sixteenth-century science was without doubt the Astronomicum Caesareum of Petrus Apianus.”

This is how Owen Gingerich begins his 1971 essay on Apianus’ folio presented to the Emperor Charles V in 1540. Gingerich certainly knows better the most the folio’s import and worth: He is Professor Emeritus of Astronomy and of the History of Science at Harvard University and a senior astronomer emeritus at the Smithsonian Astrophysical Observatory.

Gingerich reiterates in plain language the countless encomiums that preceded his essay. Even a brief glance at the resplendent folio by Apianus – or Apian, as he was also known – verifies all that Gingerich and countless other academics and collectors have penned about Astronomicum Caesareum over centuries: Seldom has a work of scholarship ever possessed more vivid, spellbinding beauty.

In his 1995 survey of the Astronomicum Cæsareum, Gingerich himself collated more than 100 copies and could account for 111 copies (including one lost during World War II). He estimated there were another 25 copies, perhaps fewer, he did not see – among them the copy being offered by Heritage Auctions in October (estimate: $150,000+). Of the folios Gingerich did inspect, very few – perhaps fewer than 10% – contained all the printed leaves and a relatively complete complement of rotating volvelles, threads and pearls.

A superb, nearly complete copy of Astronomicum Caesareum is the fitting centerpiece of Heritage Auctions’ Rare Books Signature Auction, which takes place Oct. 15-16. Its estimate of $150,000 and beyond Is still a relative bargain for a 480-year-old folio that took eight years to produce, from 1532 to 1540, and whose few remaining copies are mostly shielded from the public’s view in libraries, museums and universities. The National Library of Scotland notes that the Astronomicum Caesareum “is one of the finest printed books” in its collection.

The copy in Heritage’s upcoming Rare Books event lacks several of the rotating volvelles in addition to some threads and seed pearls, used as sliding indicators, that Gingerich suggests would comprise a relatively complete copy. But Heritage’s offering is textually complete – and, just as significantly, remains in the contemporary bindings.

Apianus’ magnificent tome “is scarcer than the first edition of Copernicus's De revolutionibus, which was published only three years later,” Gingerich wrote, “and it is considerably rarer than the much-sought 1687 Principia of Newton.”

The Astronomicum Caesareum was usually found in the collections of counts and countesses, the elite and affluent, where they remained for centuries. Copies this good, in the original bindings, appear for sale but once every decade or so. If that.

“It’s such a rare book – and such a complicated book you could write a dissertation on it, as many people have,” says James Gannon, Heritage Auctions’ Director of Rare Books. “But just as amazing is the fact that one is on the market at all, and that a private person can buy it.”

The Astronomicum Caesareum is an astronomical text that doubles as fine art, the handiwork of a cartographer, cosmographer, mathematician and astronomer who had his own printshop in Ingolstadt. Almost every page is hand-painted, including each of the dozens of rotating volvelles – “a kind of paper computer,” wrote Lund University’s Lars Gislén, “that, using the detailed instructions and examples in the text, allowed readers to calculate astronomical, chronological and also astrological phenomena.”

It described five comets – among them one we would come to call Halley’s comet. Apian, too, observed that a comet's tail always points away from the sun, a discovery for which he is credited. As the University of St. Andrews in Scotland notes on its website, “Astronomicum Caesareum delighted Charles V who, on the strength of the work, appointed Apian court mathematician and he knighted Apian and his three brothers.”

As Gingerich wrote, “A triumph of the printer’s art, the Astronomicum Caesareum truly remains an astronomy fit for an emperor.”

Or, now, anyone else.