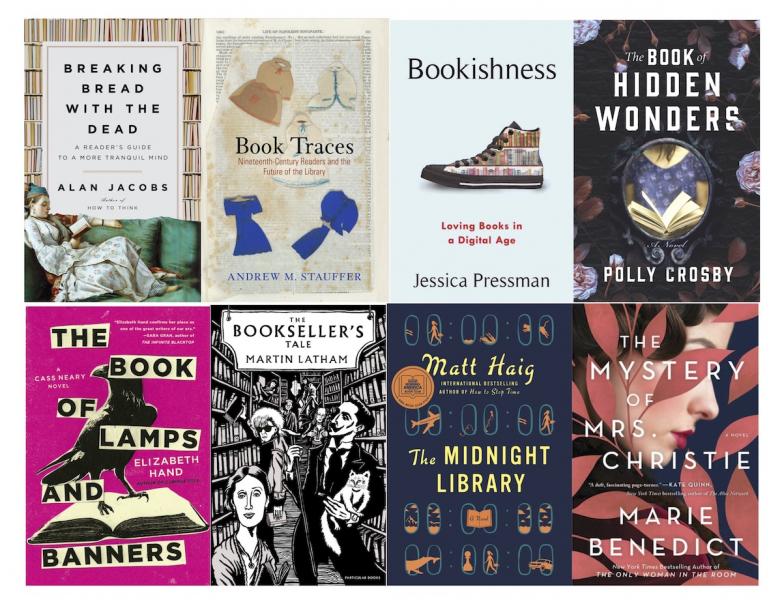 Courtesy of the publishers

Readers may have noticed something new in our recent issues: a little section up front we call “Editor’s Bookshelf.” It’s a brief list of new or forthcoming books that we think will most appeal to bibliophiles. Here’s more information on the five featured in our current issue, as well as three “bonus” picks that only came to our attention after we went to press.

Alan Jacobs takes a professorial approach in Breaking Bread with the Dead: A Reader’s Guide to a More Tranquil Mind and argues that we ought to read more old books (no argument here). But he also wants us to refocus our attention on authors like Milton, Wharton, or Jefferson—all flawed in their own ways, all perhaps subject to cancel culture—and find a way to reengage beyond the banal good/bad duality.

Ever since we wrote about about Andrew Stauffer’s Book Traces project, which documents marginalia in nineteenth-century library books, in our autumn 2014 issue when it launched at the University of Virginia, and then again on our blog later that year, we’ve been eager to see more! And now that time has come. Stauffer’s book, Book Traces: Nineteenth-Century Readers and the Future of the Library, will be available just after the new year.

Bookishness: Loving Books in a Digital Age by Jessica Pressman is an approachable study of the book as a “fetish object” in the twenty-first century. She’s thinking about things like Pride and Prejudice leggings or bookish decor objects that get added to ‘reader’s catalogs’ and book lover’s gift guides (guilty as charged), while also reading into contemporary novels in which ‘bookishness’ (defined as: "creative acts that engage the physicality of the book within a digital culture, in modes that may be sentimental, fetishistic, radical”) becomes part of the narrative framework.

If a novel about an eccentric author/illustrator set in a ramshackle old manor house in England sounds like your cup of tea, try The Book of Hidden Wonders by Polly Crosby, who spins an enchanting tale about a father who records his daughter’s life story in a series of books. The books become famous, as some readers believe they offer a series of clues leading to buried treasure, but the real secret is something young Romilly Kemp must unearth.

Antiquarian bookseller Henry Wessells recommended The Book of Lamps and Banners by Elizabeth Hand, and that was enough for us! Fourth in a series of Cass Neary mysteries, this biblionoir finds the strung-out photographer and amateur sleuth on the trail of an ancient manuscript. Fending off book dealers, gamers, and killers with impeccable aim, Cass chases the oddly powerful book through London and then to Sweden. The writing is fresh and zippy, and the plot is perfection.

Nigel Beale, host of The Biblio File podcast, also offered a fantastic recommendation: The Bookseller’s Tale written by longtime bookseller Martin Latham and published in the UK earlier this year just before everything shut down. Chock-full of charming stories about books, book collectors, and booksellers, the narrative effortlessly segues from one tale to the next — from the history of the Codex Mendoza to the copy of Shakespeare’s Venus and Adonis bought in the 1590s and stowed in an attic for 250 years “resting quietly as the Northamptonshire wind howled outside and long summer days baked the roof.” Latham’s storytelling style makes us wish we were at a pub with him hearing more.

A library sets the scene for Matt Haig’s thought-provoking novel, The Midnight Library, but it’s an odd sort of library, a purgatory in which the user can choose from an infinite number of books, each of which shows them what life would have been like had they chosen another path or made a different decision. The idea is for the protagonist, Nora Seed, to use the library to find the life that most fulfills her.

Agatha Christie fans should be on high alert for December 29 when Marie Benedict’s novel, The Mystery of Mrs. Christie, arrives in bookstores. Told in a dual narrative, the novel centers on the 11-day episode in December 1926 when the Queen of Crime herself went missing and “the largest manhunt in England’s history” ensued. An ideal fireside page-turner.

And, if you’re still looking for more great bookish reads, take a whirl through our 2020 book review coverage:

The Hunt for History

Death of a Typographer