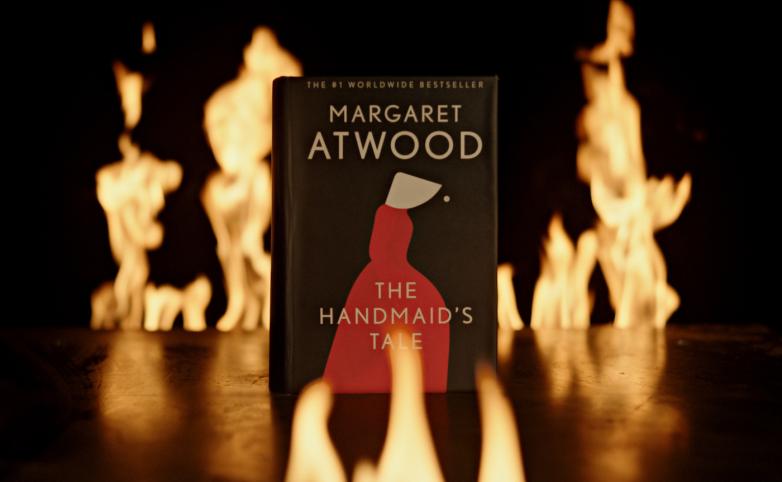 To protest widespread book bans in the U.S., Margaret Atwood has collaborated with her publishers on a fireproof edition of her most famous—and often banned—novel, The Handmaid’s Tale, first published in 1985.

A one-minute promotional video to introduce the volume shows Atwood wielding a flamethrower at this very special, noncombustible copy.

"I never thought I'd be trying to burn one of my own books... and failing,” she commented in a press release. “The Handmaid's Tale has been banned many times—sometimes by whole countries, such as Portugal and Spain in the days of Salazar and the Francoists, sometimes by school boards, sometimes by libraries. Let's hope we don't reach the stage of wholesale book burnings, as in Fahrenheit 451. But if we do, let's hope some books will prove unburnable—that they will travel underground, as prohibited books did in the Soviet Union."

Sotheby's is offering the book in an online sale that closes on June 7. It is estimated to raise up to $100,000, and indeed early bidding, as of this morning, already has it at $70,000. “More than a unique collector’s item, the fireproof edition of The Handmaid’s Tale is intended to serve as a powerful symbol against censorship and a reminder of the necessity of protecting vital stories,” said Sotheby's.

The proceeds from the book’s sale will go to PEN America, the mighty anti-censorship organization we recently featured in our winter 2022 issue.

If you are in New York City, you can see the “unburnable book" on exhibit at Sotheby’s from June 3-7.

Another copy of The Handmaid’s Tale—a first edition heavily annotated by the author—is headed to auction in July to benefit English PEN at the First Editions, Second Thoughts auction in London.