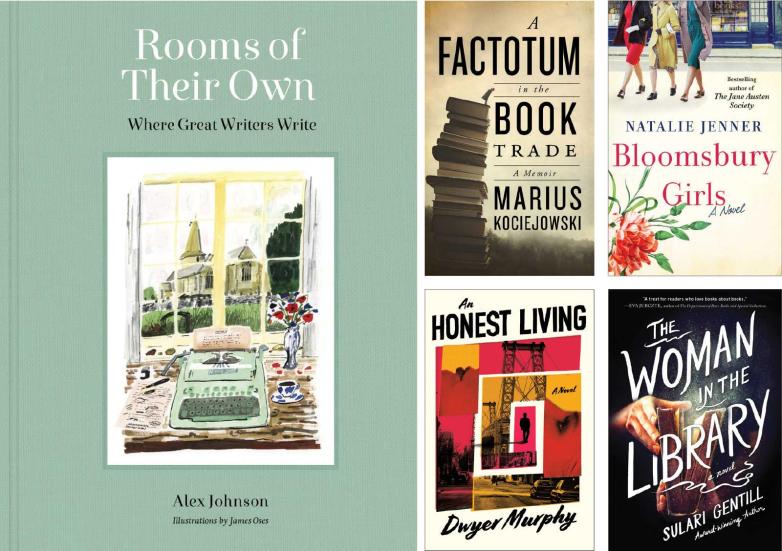 We begin with Rooms of Their Own: Where Great Writers Write (Frances Lincoln, $26) by Alex Johnson, who, as readers of this blog will know, has been contributing to Fine Books for several years. Johnson is also the author of many books about books, including Bookshelf and Book Towns, and this delightful volume is a perfect addition to that grouping. Let’s call it armchair literary tourism: Johnson takes us behind the scenes to the offices, bedrooms, and sheds where fifty of our most revered authors wrote (or still write), from Sylvia Plath to Stephen King, Maya Angelou to Marcel Proust. Did they require ceremony or solitude? Typewriter or pen? Each entry offers insight and inspiration, and the watercolor illustrations of the spaces and furnishings by James Oses are so vibrant and lovely, we couldn’t ask for more.

Marius Kociejowski’s A Factotum in the Book Trade (Biblioasis, $18.95) is the wistful memoir of a Cecil Court bookseller who both charms readers with anecdotes about Patti Smith and Martin Stone and also wallops them with statements such as “the antiquarian book trade is slowly but surely destroying the antiquarian book trade.” A Canadian who emigrated to London, Kociejowski plumbs his experiences in the English book trade during the eighties and nineties—the major players and massive changes—and reflects on what is slipping away. He writes, “I want dirt; I want chaos; I want, above all, mystery. I want to be able to step into a place and have the sense that there I’ll find a book, as yet unknown to me, which to some degree will change my life.” Agree.

Speaking of the English antiquarian book trade, my favorite biblio-novel of the season, Bloomsbury Girls (St. Martin’s Press, $27.99) by Natalie Jenner, is set in a London bookshop in 1950. The old-fashioned shop, owned by an earl, has 51 “rules,” for its staff to follow. But rules are made to be broken, in this case by three female employees—Vivien, a bookseller; Grace, an administrative assistant; and Evie, a cataloguer—who have been plagued by the pervasive sexism of the time. Readers (like us) who enjoyed Jenner’s 2020 novel, The Jane Austen Society, will recall some of the characters, including Evie, as well as Mimi Harrison, a Hollywood star and Austen aficionado; and Yardley Sinclair, the helpful Sotheby’s expert. Several real-life literary characters like Daphne Du Maurier, Sonia Blair, and Samuel Beckett also make an appearance in the story, as does a rare first edition of The Mummy! (1827). Bloomsbury Girls is thoroughly enjoyable, full of energy and spirit—and best of all, gets the bookish details right.

If bookseller noir is more to your liking, An Honest Living (Viking, $26) by Dwyer Murphy, editor-in-chief of CrimeReads, hits all the right notes. A recovering lawyer turned private eye is hired to find proof that Newton Reddick, a prominent book dealer and member of the Poquelin club of “old bookmen,” is stealing rare books from his wife, a famous novelist. But then Reddick dies, and it looks like a bizarre set-up. A larger biblio-mystery involving stolen identities and murder trial pamphlets is afoot. Set in New York City in the early 2000s, the characters conjure the murk and grit of the city then, even as it was slowly being overhauled by the kind of real estate developers that turn up later in this smart and seductive page-turner.

The Woman in the Library (Poisoned Pen Press, $26.99) by Sulari Gentill opens in the Boston Public Library reading room where four strangers—two of whom are writers—meet coincidentally while a young woman is murdered elsewhere in the building. When one of them comes under suspicion, the others rally to get to the bottom of it, but secrets emerge that call everything into question. There’s a dual, metafictional narrative that unfolds in letters to the author of the mystery as it is being written, which is very cleverly executed. For whose who enjoy real puzzler, with layer upon layer of suspenseful plotting, check out this whodunit.