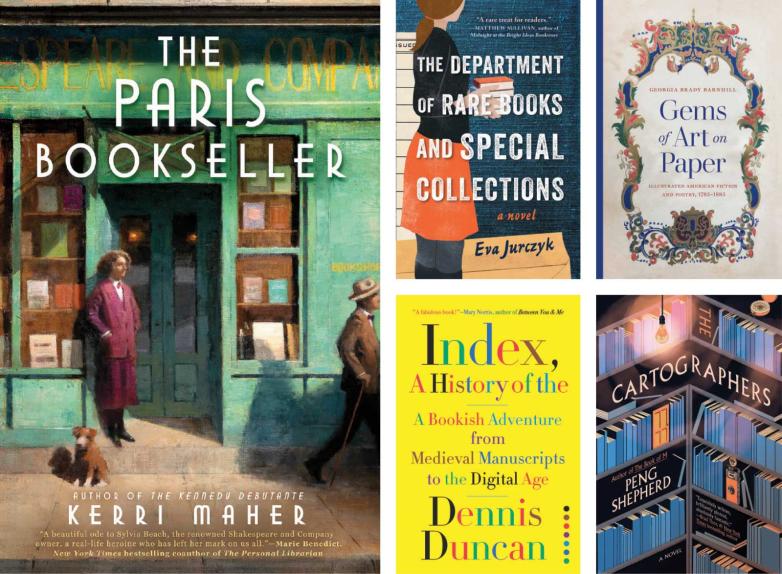 The spring issue’s Editor’s Shelf recommends five new books about books, and I’m adding two to that list in this brief review of new books bibliophiles will particularly enjoy.

Kerri Maher’s The Paris Bookseller (fiction) centers on the life of Sylvia Beach, founder of Shakespeare & Co. bookshop and publisher of James Joyce’s Ulysses, in Paris in the years between the wars. Maher does an admirable job with tough real-life characters—Beach, Joyce, Hemingway, and Stein—without losing sight of her engaging narrative, and she should be praised for her attention to details like the types of paper used to print Ulysses and what they would have cost. One more thing I liked about it: in the author’s note, Maher says her initial interest in Beach was sparked years ago when she found a copy of the bookseller’s memoir “in one of the open bins in front of the bookstores of Telegraph Avenue in Berkeley.”

The backdrops in Peng Shepherd’s The Cartographers (fiction), will set bookish hearts ablaze: secret rooms in the New York Public Library’s maps department and the aisles of the New York Antiquarian Book Fair. Millennial Nell Young, disgraced from her conservation internship at the NYPL, is begrudgingly working as a reproduction artist when her father, a distinguished map curator, dies and leaves behind a mysterious highway map that sets Nell on a wild chase that turns violent. Points for creativity, demerits for a few discordant notes.

Those who have worked in a university library will appreciate a novel about the ins and outs of rare books when mixed with questionable academic directives. The Department of Rare Books and Special Collections (fiction) by Eva Jurczyk delivers that well enough, though sometimes feels exaggerated. Of course, readers will root for Liesl Weiss, the middle-aged librarian who must battle a series of male bosses and colleagues (and her own demons) when a priceless manuscript goes missing.

Index: A Bookish Adventure from Medieval Manuscripts to the Digital Age (nonfiction) by Dennis Duncan is a glorious celebration of the humble index, both a useful textual tool and “a perfectly-sized nook for the deployment of snark” in the hands of some indexers. The advent of the index around 1230, its rival methodologies, and its effect on how readers read may sound like dry stuff to some, but Duncan appeals to his readers with smart research and a witty style, making Index a true ‘crossover’ title. Illustrations help.

For collectors of early American illustrated books, gift books, or literary annuals, Gems of Art on Paper: Illustrated American Fiction and Poetry, 1785-1885 (nonfiction) by Georgia Brady Barnhill will be an invaluable resource. The author, former curator of graphic arts at the American Antiquarian Society and director of the Center for Historic American Visual Culture, provides an in-depth study over four chapters and an appendix on the topics noted above.

In The Book of the Most Precious Substance (fiction), Sara Gran creates one of the most realistic and likable antiquarian booksellers in fiction. Lily Albrecht is a former novelist whose life took an unexpected turn when her husband became ill. Now hawking secondhand books at book fairs—described in pitch-perfect detail—Lily gets a lead on a rare, possibly unique occult manuscript that, if found, could net a million dollars. She and her partner follow the trail to California, New Orleans, and Paris, spooked by at least two murders in their wake. This is easily one of the most compelling biblio-novels out there. (Note: If light erotica offends, this is not for you.)

The Library: A Fragile History (nonfiction) by Andrew Pettegree and Arthur Der Weduwen is ‘Nick’s Pick,’ as in our columnist Nick Basbanes emailed me back in January to say that this book was “wonderful” and that I simply had to read it. Nick also arranged to interview Pettegree, so there will be much more on this one in our summer issue.