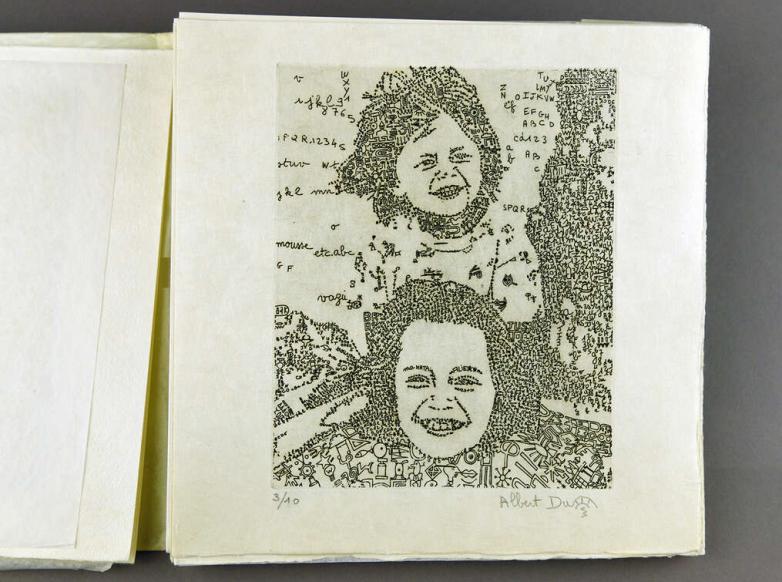 Courtesy of the Univeristy of Iowa Libraries

Last month, the University of Iowa (UI) Libraries Special Collections announced that it has become the new home of the renowned Sackner Archive of Visual and Concrete Poetry. Founded by Miami Beach-based collectors, Dr. Marvin Sackner and his wife, the late Ruth Sackner, the Sackner Archive currently holds the largest collection of concrete and visual poetry in the world.

For our fall 2015 issue, A.N. Devers interviewed the Sackners about their “artpoe” collection, a term they coined when they began collecting typewriter art and poetry. Since the mid-sixties, the Sackners had been collecting Russian avant garde and Constructivist art and imagery, but that all changed in 1975 when they got a glimpse of British artist Tom Phillips’ The Humument on exhibit in Switzerland at the Kunsthalle Basel. The innovative artist’s book “stole their hearts.” Marvin elaborated: “It was the only exhibition I’ve ever gone to two days in a row … There was a price on The Humument. I think it was $65,000. I thought, ‘I’ll never be afford to buy this book.’ Years later, I bought the book. It worked out.” The Sackners told Devers they considered it the cornerstone of a collection they officially named the Sackner Archive of Visual and Concrete Poetry in 1979.

In 2016, the Pérez Art Museum Miami announced its acquisition of the archive, a deal that seems to have foundered in the past few years. The Archive’s new home at UI is recognized as a center for the study of Dadaism, an area of complementary interest. Beyond that, UI boasts some extraordinary supportive assets, including a world-class conservation program, UI’s Center for the Book, the Iowa Writers’ Workshop, the University of Iowa Stanley Museum of Art collections, and its location in Iowa City (a UNESCO City of Literature).

“It’s a great honor for the UI Libraries to become the new home for the Sackner Archive, which will enrich scholarship, inspire generations of students, and draw visitors from around the world,” commented John Culshaw, the Jack B. King university librarian at the UI.

“My beloved wife, Ruth, and I had a dream that one day our efforts to build our collection into one that would reside in a world-class educational institution like the University of Iowa would come true,” Marvin Sackner commented in a statement released by the UI Libraries. “Our dream has finally become a reality. I am just sorry that Ruth is no longer with us to witness this monumental moment.”

The Sackner Archive will open to scholars and students in January, 2020. For more details on this acquisition, read the full news release here.