Rare Printing of “The Star-Spangled Banner” Heads to Auction 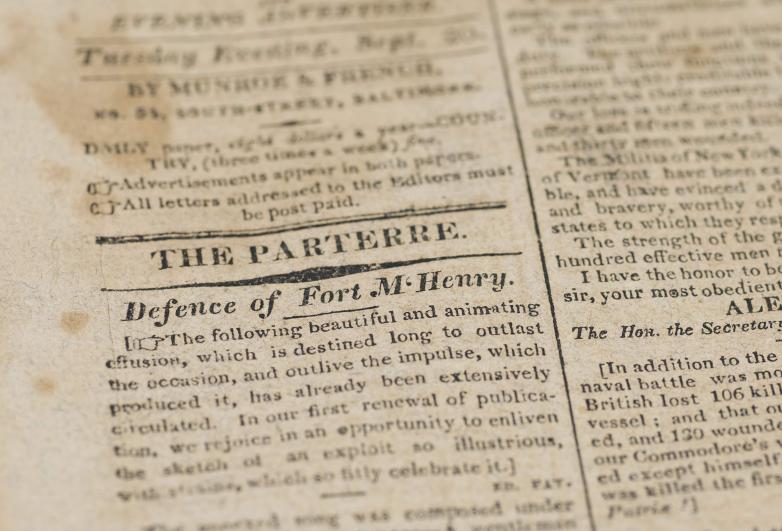 A "beautiful and animating effusion" published in the Baltimore Patriot & Evening Advertiser, 1814, that later became known as "The Star-Spangled Banner." Estimate: $300,000-500,000.

Last week Christie’s announced the forthcoming sale of the first newspaper printing of “The Star-Spangled Banner,” as published in the Baltimore Patriot and Evening Advertiser on September 20, 1814, under its original title, “The Defence of Fort M’Henry,” just days after Francis Scott Key completed the verses. It is, according to Christie’s, one of only three known copies, and this is the first time a copy has ever appeared at auction. The consignor, the American Antiquarian Society in Worcester, Massachusetts, confirmed that it owns another one of the extant copies, making this a duplicate in its collection. By the time the online bidding closes on June 18, the item is estimated to reach $300,000-500,000, which will “benefit the collections fund” of the AAS.

For those who need a reminder, America’s national anthem had its humble beginnings aboard a British naval ship where Francis Scott Key, a 35-year-old lawyer from Maryland who was negotiating the release of a prisoner, had a front-row seat to the attack on Baltimore. It was thought to be a lost cause — Washington, D.C., had already been sacked and burned. But when the smoke cleared on the morning of September 14 after a 27-hour bombardment, Key spotted the American flag still aloft, inspiring his famous lyrics set to a popular English drinking song. It was printed and circulated via broadside and in the Baltimore Patriot, and, within months, could be found in periodicals everywhere under its new name, “The Star-Spangled Banner.” Congress proclaimed it the national anthem in 1931.

Peter Klarnet, senior specialist in books & manuscripts at Christie’s, commented in a press release: “The 20 September issue of the Baltimore Patriot is significant not only because it bears the first appearance of ‘The Star-Spangled Banner’ in a newspaper, but it also offers a window into the world in which it was written — chronicling the political convulsions of a nation that was bitterly divided over the War of 1812. Indeed, Francis Scott Key was an opponent of the conflict, but despite his misgivings on the wisdom of going to war with the most powerful nation on earth at the time, he would stand with the raw militia that vainly attempted to defend Washington in August, and would celebrate the miraculous victory at Baltimore with what would become the young nation’s official anthem.”