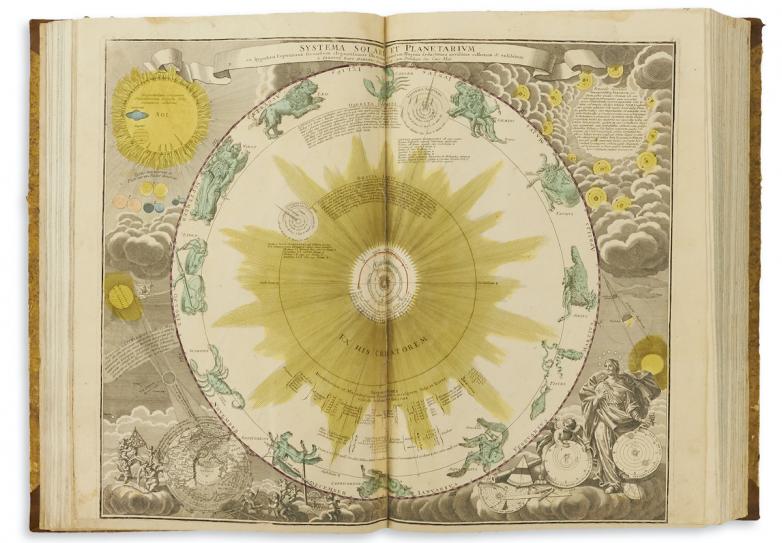 New York — Maps & Atlases, Natural History & Color Plate Books comet to auction at Swann Galleries on Thursday, July 9. American cartography and atlases that span the globe and the centuries, as well as noteworthy treasures by John James Audubon feature in the sale.

Maps of America include the important John White and Theodor de Bry map of Virginia—the first showing in accurate detail any part of what is now the United States ($8,000-12,000); and a rare 1755 edition of the Fry & Jefferson map of the Most Inhabited Part of Virginia Containing the Whole Province of Maryland with part of Pensilvania, New Jersey and North Carolina ($12,000-18,000). Several Johannes van Keulen circa 1700 charts are in the sale, including the Carolina and Georgia coast ($2,500-3,500) and New England from Manhattan to Nantucket ($3,000-5,000).

Further maps of note include manuscript plats compiled by the Separatist Society of Zoar, Ohio, that were intended for the organization of a new communal village in 1882 ($500-750); a rare first edition, first state of Braddock Mead’s Map of the Most Inhabited Part of New England, 1755 ($10,000-15,000); a circa 1814–16 “schoolgirl map” of east coast of the United States by Catharine Beecher—a major figure in early nineteenth-century American women’s education—made as a young student herself ($1,500-2,500); California as a massive island in Nicolas Sanson’s Le Nouveau Mexique et la Floride, 1656 ($3,000-5,000); and German editions of Captain John Smith’s maps of New England and Virginia ($4,000-6,000, apiece).

Limited previewing (by appointment only) will be available from July 6 through July 8. Swann Galleries staff will prepare condition reports and provide additional photographs of material on request. Advance order bids can be placed directly with the specialist for the sale or on Swann’s website, and phone bidding will be available. Live online bidding platforms will be the Swann Galleries App, Invaluable, and Live Auctioneers. The complete catalogue and bidding information is available at www.swanngalleries.com and on the Swann Galleries App.