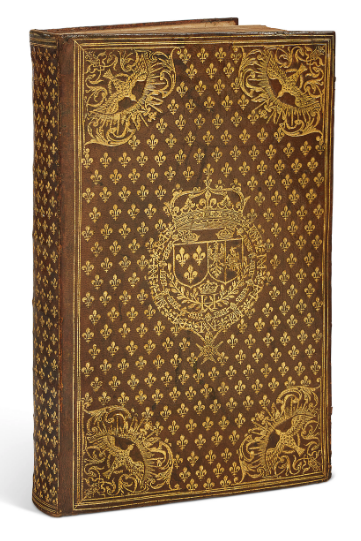 Louis Duret's 1588 edition of Hippocrates, with the arms of Henri III in the binding. Offered at Christie's Paris on May 27.

Here are the upcoming auctions I'll be watching:

On Thursday, May 21, Forum Auctions will sell Books and Works on Paper, in 201 lots.

Also ending on Thursday, PBA Galleries' sale of Americana from the George M. Steinmetz Collection – Literature – Miscellaneous Books. There are 301 lots up for grabs in this entirely no-reserve sale. Much of interest to the Californiana collector.

Freeman's holds two sales on May 28: The Martin Magovsky Collection of Children's Books and Books & Manuscripts. The first comprises 156 lots, of which a copy of Matt de la Peña's Last Stop on Market Street (2015), signed by Peña and by illustrator Christian Robinson, rates the top estimate at $3,000–5,000. A first edition of Mrs. Frisby and the Rats of NIMH could sell for $1,000–1,500. There are 217 lots in the second sale, including a first octavo edition of Audubon's Birds of America ($20,000–30,000); two plates from the first edition each rate the same estimate.