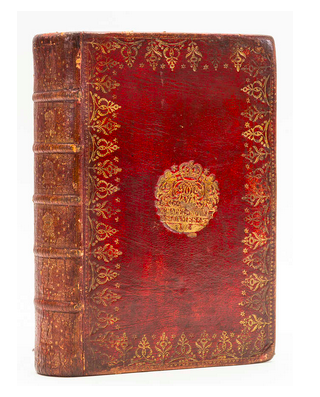 1759 Cambridge Book of Common Prayer, with the cipher of George II on the binding. Offered at Forum Auctions this week.

A few auctions to keep an eye on:

On Thursday, May 7, Books and Works on Paper at Forum Auctions, in 301 lots. A thirteen-volume set of the Bibliotheca Heberiana, mostly in the original boards, is estimated at £600–800, as is a pencil drawing of a fisherman sitting on a log, in the manner of John Constable. A 1759 Cambridge Book of Common Prayer with the cipher of George II on the binding could sell for £400-600.

Also on Thursday, Printed & Manuscript African-Americana at Swann Galleries. The 400 lots include a small collection of papers and photographs relating to the family of Dora Stephens, born enslaved to Alexander Hamilton Stephens, who served as VP of the Confederate states ($25,000–35,000). A 1794 German-American antislavery broadside is estimated at $12,000–18,000. An early printing of the Emancipation Proclamation could sell for $10,000–15,000.

At Freeman's on Thursday, The P.G. Wodehouse Collection of William Toplis, in 191 lots. See Rebecca's preview of this sale from last week. The corrected typescript of Do Butlers Burgle Banks? rates the top estimate, at $5,000–8,000. Four volumes of Wodehouse's personal scrapbooks could sell for $3,000–5,000, as could the first English edition of Big Money in the rare first-state jacket.