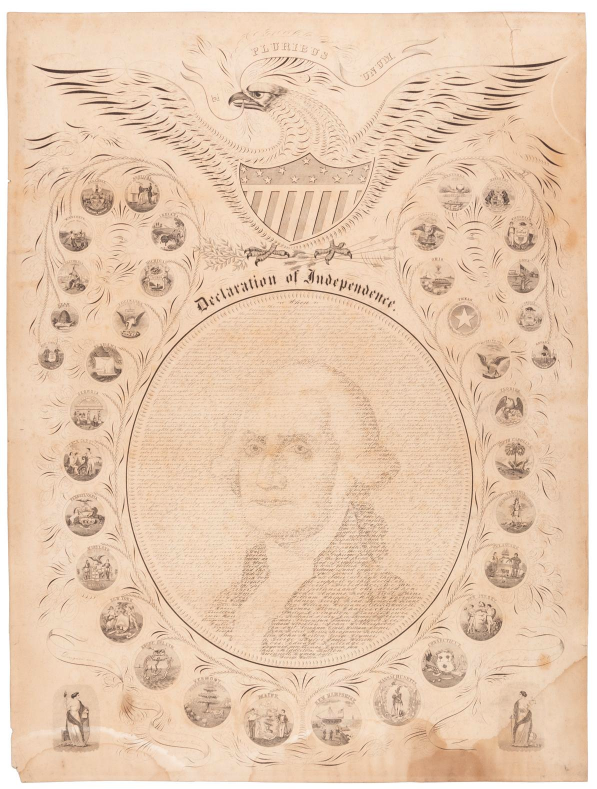 Lithographed Declaration of Independence, with the calligraphic text forming a portrait of George Washington. Offered at PBA Galleries on Thursday.

Lot of lots to watch this week:

Also on Wednesday, Biblioteca Alberto Marín at Soler y Llach in Barcelona. The 415 lots include a 1738 edition of Don Quixote published in London (estimated at €11,000) and a copy of the 1780 Ibarra edition of the same work (estimated at €10,000). Much more Cervantes material and some very interesting early printing in this one, too.

On Thursday, February 20, Aguttes sells Livres anciens & illustrés modernes, manuscrits & lettres autographes, in 311 lots. A 1916 Henri Matisse letter with a penned self-portrait is expected to lead the sale, estimated at €25,000–30,000. A manuscript book of hours for Pierre Fijan, with illuminations by the Master of the Missal of Troyes, is estimated at €18,000–20,000. Seven letters from a young Jules Verne to his parents could sell for €15,000–20,000.

Forum Auctions holds an online sale of Books and Works on Paper on Thursday, in 220 lots.

Collectors of Californiana will be watching the sale of Rare Americana & Cartography with the Robert M. Ebiner Zamorano 80 Collection at PBA Galleries on Thursday. The 539 lots include Francisco Paloú's Relacion Historica de la Vida y Apostolicas Tareas del Venerable Padre Frey Junipero Serra (1787). This, the Irving W. Robbins, Jr., copy, was annotated by Robbins "Copy like this, the best I've seen." It is estimated for this sale at $10,000–15,000. A nice copy of Dana's Two Years Before the Mast (1840) could sell for $5,000–8,000. At the same estimate is an 1865 lithographed Declaration of Independence in calligraphy forming a potrait of George Washington.