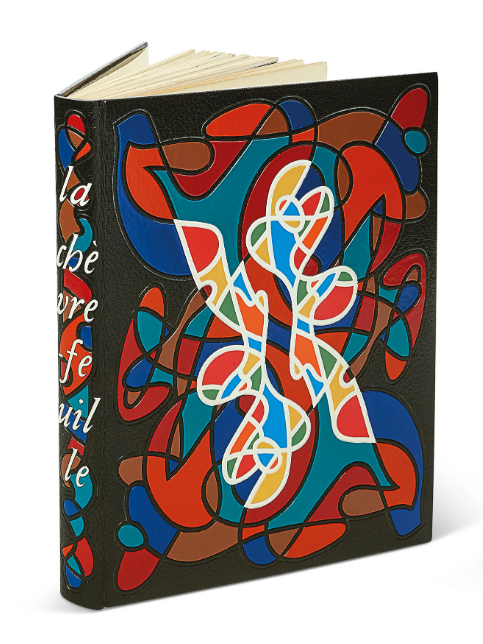 Christie's Paris will hold a sale of Livres rares et manuscrits today, in 72 lots. A collection of sixteen letters from Marcel Proust to his friend René Blum about the publication of A la Recherche du temps perdu is estimated at €200,000–300,000. Paul Eluard's copy of Picasso's La Chèvre-Feuille (1943), one of six copies on Arches vellum, could fetch €60,000–90,000. A French manuscript made for Madame de Maintenon by Jean-Antoine de Barras de la Penne is estimated at €40,000–50,000, as is a first edition of Grotius' De jure belli ac pacis in a contemporary binding.

On Wednesday, October 9, Lyon & Turnbull will sell Rare Books, Maps, Manuscripts & Photography, in 473 lots. A first edition of Darwin's Origin in Freeman's Binding Variant A is expected to lead the way, estimated at £40,000–60,000. This is a publisher's presentation copy, inscribed to Scottish physician Dr. Allen Thomson. An inscribed copy of Ian Fleming's Casino Royale could sell for £12,000–18,000. William Daniell's Voyage Round Great Britain is estimated at £8,000–12,000. For the Stieg Larsson fan, a boxed set edition of the Millennium Trilogy, in a bespoke Sangorski & Sutcliffe binding could sell for £7,000–9,000.

Also on Wednesday, Morton Subastas holds a sale of books and documents related to the history of Mexico, in 279 lots. Two lots have a starting bid of MX$250,000: a set of documents related to the involvement of José María Cos in the Mexican independence struggle, and a 1570 probanza about the "merits and services" of Diego Holguin. A 1552 first edition of las Casas' Aqui se Contiene una Disputa o Controversia starts at MX$180,000.

PBA Galleries sells Fine Literature on Thursday, October 10, in 565 lots. Sharing the top estimate of $5,000–8,000 are Jack London's The Iron Heel in an original dust jacket; a double-sided painting by Charles Bukowski, from the collection of John Martin of Black Sparrow Press; and two VHS tapes containing three hours of unreleased footage of a Bukowski magazine interview from 1983. Lots 445–558 are being sold without reserve.

At Swann Galleries on Thursday, Fine Books & Manuscripts, in 585 lots. Three lots share the $40,000–60,000 top estimate: a collection of more than 65 Greta Garbo letters to her friend Salka Viertel; two volumes from Herman Melville's library, with his marginalia; and a complete set of proof sheets of Blake's Illustrations of the Book of Job. A presidential autograph album covering Washington to FDR could sell for $30,000–40,000.