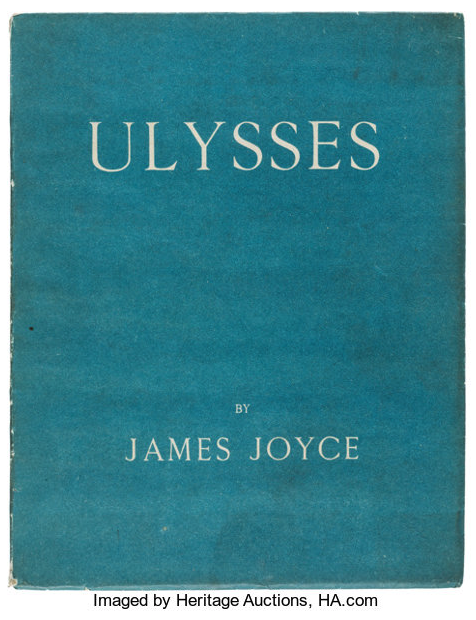 A first edition of Ulysses, offered on Thursday at Heritage Auctions.

A quartet of sales I'll be watching this week:

On Wednesday, September 4, Heritage Auctions sells The Maurice Car Collection of Arts and Sciences Featuring Rare Books and Manuscripts, in 243 lots. A leaf of Isaac Newton manuscript notes on physics and geometry has an opening bid of $25,000. A collection of Tristan Tzara manuscripts about Dadaism, exquisitely bound by Paul Bonet, was bid up to $23,000 by Saturday afternoon. Other lots include a collection of Ezra Pound letters (opening at $5,000); a Paul Gauguin manuscript French/Polynesian dictionary (opening at $4,000); and letters and sketches by the likes of Cezanne, Picasso, and Matisse.

Forum Auctions holds an online sale of Books and Works on Paper on Thursday, September 5, in 205 lots. Lots 1–19 are from the library of the late Dr. Gutala Krishnamurti, the founder of the Eighteen Nineties Society. Expected to lead the way are a 1778–79 quarto edition of the Encyclopédie and a 1662 Paris folio edition of Laonicus' Histoire Generale des Turcs (both estimated at £1,000–1,500). A near-complete set of Matrix is estimated at £800–1,200.

Also on Thursday, PBA Galleries sells Rare Books & Manuscripts on Thursday, in 302 lots. A sixty-volume limited edition set of Dickens published in 1902, and including a tipped-in autograph letter by Dickens, rates the top estimate at $8,000–12,000. Victor Rendu's Ampelographie Française (1857), with seventy chromolithographic plates, could fetch $7,000–10,000. An inscribed copy of Richard Henry Dana's Two Years Before the Mast with a tipped-in presentation letter is estimated at $6,000–9,000. Lots following Lot 259 are being sold without reserve.

Rounding out Thursday's sale is Heritage Auctions' Rare Books Signature Auction Featuring The Otto Penzler Collection of Mystery Fiction, Part II. There are 828 lots on offer, including a first edition of Ulysses (with reserve set at $38,500). A lovely copy of Graham Greene's Brighton Rock (1938), in the original jacket, was bid up to $21,000 by Saturday. An original Arthur Rackham frontispiece for The Pied Piper of Hamelin starts at $14,500. Also on the block are a presentation copy of Wilkie Collins' After Dark (starting at $5,000) and a copy of the first American edition of Jefferson's Notes on the State of Virginia (starting at $1,750).