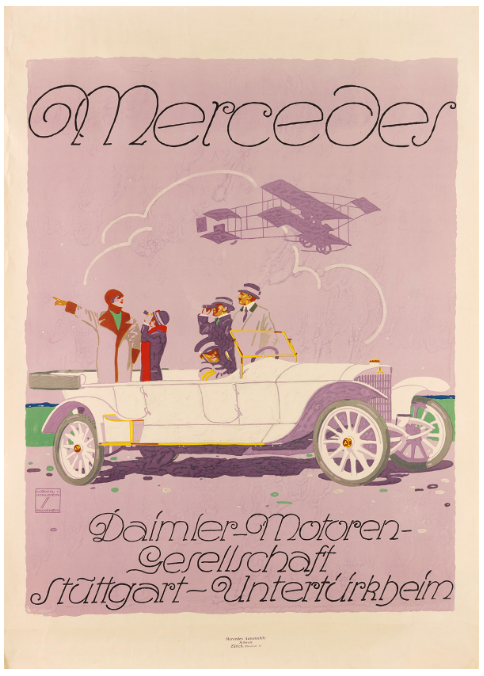 On Wednesday, August 7, Swann Galleries will sell Vintage Posters, in 574 lots. Alphonse Mucha's third and final poster version of the Four Seasons, printed on silk in 1900, is estimated at $15,000–20,000, as is a 1914 Ludwig Hohlwein poster for Mercedes. A 1933 E.H. Fairhurst poster for the London, Midland & Scottish Railway, promoting the introduction of the new Princess Royal steam locomotive, could sell for $10,000–15,000.

Forum Auctions holds an online sale of Books and Works on Paper on Thursday, August 8. The 217 lots include some material from the estate of the late James Stevens Cox, FSA. Estimated at £600–800 are Sir Robert Dallington's A Method for Travell (London, 1605); a set of seventeen folio illustrations by William Daniell (after Robert Smirke) for the Arabian Nights (1814); a first edition of John Maynard Keynes' General Theory of Employment, Interest and Money (1936); and the three-volume Galerie du Palais Royale (Paris, 1786–1808).

Also on Thursday, PBA Galleries sells a Summer Miscellany & Golf Books, in 314 lots. A complete, seventeen-volume set of the USGA Golf Classics Facsimiles (1981–1996) is estimated at $1,000–1,500. A first printing of Robert Louis Stevenson's The Silverado Squatters (1883) could sell for $500–800. At the same estimate range are a copy of the official program for the 1953 USGA Open Championship and a first edition of Bernard Darwin's The Golf Courses of the British Isles (1910). Lots 195–291 are being sold without reserve, and Lots 292–314 are shelf lots being sold without reserve.