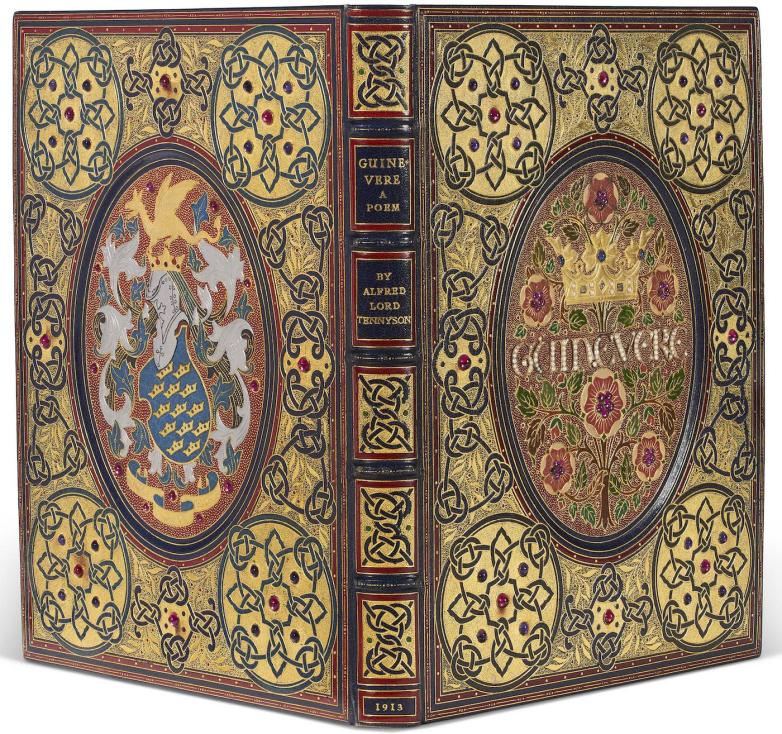 Jeweled binding by Alberto Sangorski on an illuminated manuscript copy of Tennyson's Guinevere, offered at Christie's this week.

Another very busy week for bibliophiles coming up in the auction rooms.

Sotheby's Milan's online sale of Antiquarian Books ends on Tuesday. The 283 lots include an eight-volume set of Johannes Blaeu's townbook views of Italy and the Piedmont (1724–1725), estimated at €70,000–90,000. A copy of the first appearance of Ptolemy's Almagest in print (the 1496 Venice edition edited by Johannes Regiomontanus), bound in a leaf from a twelfth-century French glossed psalter, is expected to sell for €60,000–80,000. At the same estimate range is a copy of one of the first books printed in Romania, a 1512 edition of the Gospels in Church Slavonic. This copy is in a contemporary local binding. Some other interesting early printed books to be had in this one.

At Christie's New York on Thursday, Valuable and Important Books and Manuscripts from the Library of Edward R. Leahy. The 214 lots include a Shakespeare Second Folio (1632) and a first edition of Mary Shelley's Frankenstein (1818), both of which are estimated at $200,000–300,000. The latter was previously owned by the London publishers Adolphus and Rudolph Ackermann. A marvelous illuminated manuscript copy of Tennyson's Guinevere (1909–1913) in a jeweled binding by Alberto Sangorski for Rivière is expected to sell for $100,000–150,000. A Shakespeare Fourth Folio (1685) is estimated at $70,000–100,000. At the same estimate range are a copy of the 1640 first English translation of Machiavelli's The Prince and a presentation copy of Boswell's Life of Johnson inscribed by the author to John Douglas, Bishop of Carlisle. Many more fascinating lots in this one as well, so do have a thorough look at this catalog.