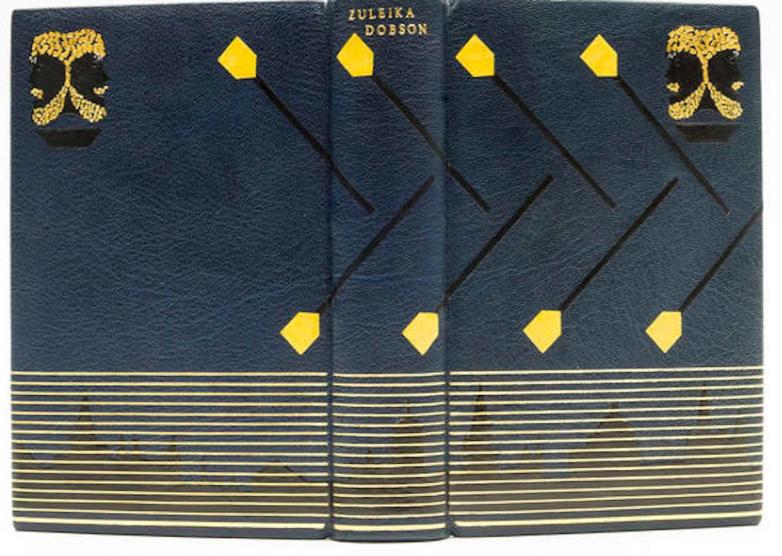 Max Beerbohm's Zuleika Dobson in a special binding by James and Stuart Brockman, offered at Forum Auctions this week.

There's a trio of sales to watch on Thursday, June 9.

Forum Auctions sells Modern Literature, in 269 lots. An early impression set of the Lord of the Rings novels shares the top estimate at £1,500–2,000 with first edition copies of Graham Greene's The Man Within and The Ministry of Fear. A copy of Beerbohm's Zuleika Dobson in a commissioned binding by James and Stuart Brockman and a first edition of Wilfred Owen's Poems are each estimated at £1,000–1,500. One of 100 specially bound copies of Orwell's Nineteen Eighty Four could sell for £800–1,200.

At Swann Galleries on Thursday, 245 lots of Illustration Art. Georges Lepape's Fantasie sur fantaisies / La Farandole (1914) is expected to lead the sale at $20,000–30,000. An original watercolor by Eleanor Vere Boyle (EVB) published in Sarah Austin's translation The Story Without an End (1868) is estimated at $15,000–25,000. "A Love by the Stars," a 1971 painting by Roger Hane for the De Beers "A Diamond Is Forever" ad campaign rates the same estimate, as do a Paule Émile Berthon maquette "The Marionette" and an Al Hirschfeld illustration for the 1979 Broadway production of "Sweeney Todd."