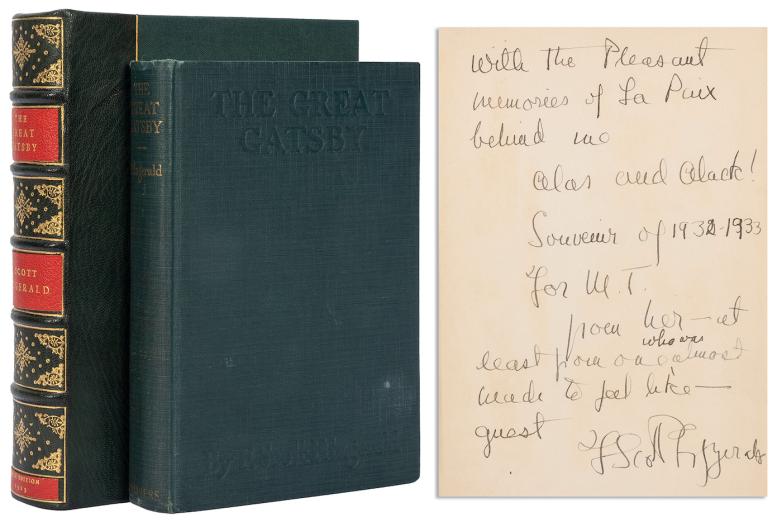 A presentation copy of Fitzgerald's Great Gatsby (1925), inscribed to Margaret Turnbull, is estimated to reach $30,000–50,000 at auction this week.

The upcoming week is a very busy one for rare books and manuscripts at auction.

Christie's online sale of Fine Printed Books and Manuscripts including Americana ends on Monday, April 25. The 175 lots include a first edition of Mary Shelley's Frankenstein, the three volumes bound in one and with an ownership inscription dated 1824. This is estimated at $300,000–500,000. A set of four unrecorded Blaeu continental maps could sell for $100,000–150,000. A first impression copy of Ian Fleming's Casino Royale (1953), inscribed "To M, these pages from my memoirs! Ian" is expected to fetch $90,000–120,000. The recipient may perhaps be Admiral John Godfrey, believed to be the inspiration for M. A very rare set of Davy Crockett's Almanacs is expected to sell for $80,000–120,000. A presentation copy of an 1825 edition of Grimm's fairy tales, inscribed by both Grimm brothers to Amalie Hassenpflug, one of the contributors of tales collected by the Grimms, is estimated at $60,000–90,000. This copy was previously in the collection of Maurice Sendak.

Sotheby's New York sells 105 lots of Books and Manuscripts from the Collection of Jay I. Kislak on Tuesday. Sold to benefit the Kislak Family Foundation, the lots include J.F.W. Des Barres' Atlantic Neptune (1774-1779), the Streeter copy, which is estimated at $700,000–1,000,000. The Perrette copy of Theodor de Bry's collection of voyage accounts could sell for $400,000–600,000. A second edition of Copernicus' De Revolutionibus (1566) annotated by the seventeenth-century English scholars Henry Briggs and Henry Gellibrand could sell for $200,000–300,000. Many other lots in this sale have particularly interesting and notable provenance.

On Wednesday, April 27, Forum Auctions sells 201 lots of Books and Works on Paper.

Bonhams' online sale of The Library of Roman Vishniac and Other Properties ends on Thursday.