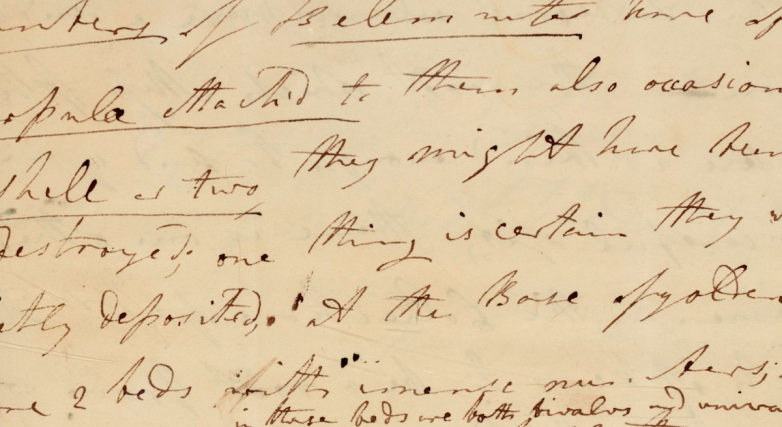 Detail from a November 1834 letter from Mary Anning to William Buckland, offered at Sotheby's this week.

Another jam-packed week of sales coming up: 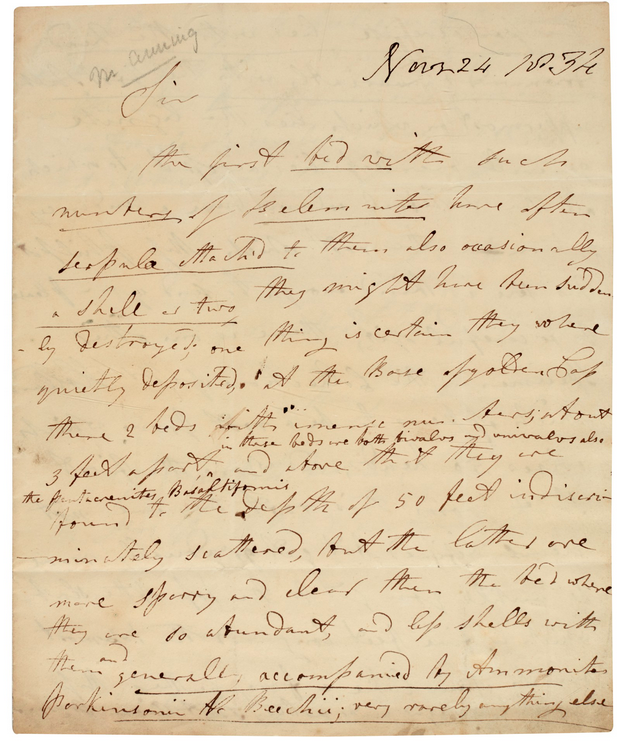 The Sotheby's Science: Books & Manuscripts sale ends on Tuesday, May 25. The 56 lots include a first edition of Copernicus' De revolutionibus (1543) not recorded in Owen Gingerich's census of copies (£70,000–100,000). This is a second copy from the collections of Rostock University Library. A copy of the rare first edition of János Bolyai's essay on non-Euclidean geometry, formerly in the library of Dr. Paul Stäckel, is estimated at £50,000–70,000. A November 1834 autograph letter from Mary Anning to William Buckland reporting new fossil crinoid beds in Dorset rates the same estimate. A manuscript collection of drawings and notes on French fossils from the 1870s could fetch £15,000–20,000.

At Skinner on Tuesday, the online timed sale of Historic Manuscripts & Rare Books comes to an end: among the 296 lots are one volume of the 1834–35 edition of the Kitab Alf Layla wa-Layla (Thousand and One Nights) printed at Bulaq, Egypt ($20,000–30,000). The first volume of Audubon's Quadrupeds, containing twenty-six imperial folio plates, is estimated at $15,000–20,000. Two volumes of autographs collected by Union Army officer John S. Schultze in 1864 in aid of the U.S. Christian Commission could sell for $10,000–15,000.

ALDE sells the Bibliothèque Cynégétique Jean-Pierre Lemanissier on Wednesday and Thursday, 26–27 May, in 493 lots.

At University Archives on Wednesday, Rare Autographs, Manuscripts, Artwork, Comic Art, in 409 lots. A small double-sided sheet of Isaac Newton manuscript mathematical notes believed to relate to the contents of his Principia and formerly in the Honeyman Collection is estimated at $100,000–150,000. Three pages of Einstein manuscript equations on unified field theory could sell for $60,000–70,000.

Fine Books, Manuscripts and Works on Paper will be on the block at Forum Auctions on Thursday, May 27, in 384 lots. A painted bird's-eye panoramic view of the port of Naples dated to around 1714–1734 shares the £30,000–40,000 top estimate with Narcissus Luttrell's five-volume set of Purchas His Pilgrimes. A large collection of manuscript and printed documents relating to privateering and the Bristol shipping trades could sell for £25,000–35,000.

PBA Galleries' sale of Literature – Beats & the Counterculture – Illustrated Books on Thursday will round out the week. The 434 lots include a first issue copy of Steinbeck's The Pastures of Heaven (1932), estimated at $12,000–18,000; a copy of the limited edition of Stephen King's Dark Tower: The Gunslinger (1982) signed by King and artist Michael Whelan ($5,000–8,000); and one of thirty copies of the Black Sparrow Press broadside edition of Charles Bukowski's To Kiss the Worms Goodnight ($4,000–6,000).