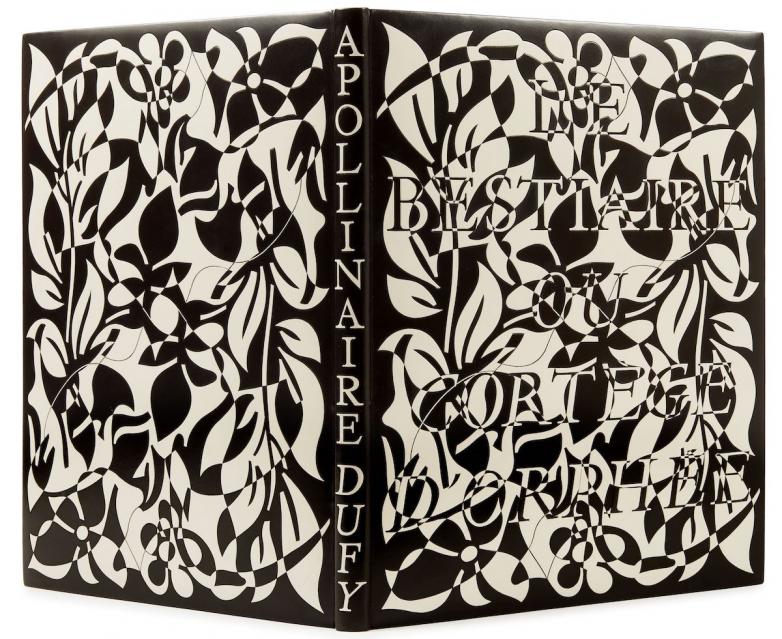 I'll be watching a quintet of sales this week:

At Artcurial on Tuesday, March 9 Bibliothèque Maurice Houdayer, Première partie, in 365 lots. A deluxe copy of the 1911 Deplanche edition of Apollinaire's La Bestiaire ou Cortège d'Orphée, bound by Pierre-Lucien Martin and with woodcuts by Raoul Dufy, is expected to lead the sale at €30,000–40,000. The printer's copy of Georges Hugnet's Non vouloir (1942), one of just four copies printed on China paper with extra materials and inscribed twice by Hugnet, is estimated at €25,000–30,000.

On Wednesday, March 10, Dominic Winter Auctioneers sells Printed Books, Maps & Documents, The Kenn Back Polar Library. The first 44 lots (of 435 total) comprise the collection of Eric Kenneth Prentice Back, Antarctic meteorologist and base commander. His manuscript log with added photographs of his first posting on Adelaide Island from 1963 to 1966 is among the lots, estimated at £300–500. There will be a great deal of interest here for the polar collector. Among the other lots, James Cavanah Murphy's The Arabian Antiquities of Spain is expected to sell for £3,000–4,000, while a complete copy of Bowen's Complete System of Geography (1747) could fetch £2,500–3,500.

Also on Thursday, Fine Photographs at Swann Galleries, in 406 lots. Ansel Adams' Portfolio V (printed 1970), containing ten silver prints, rates the top estimate, at $25,000–35,000. An albumen print of Julia Margaret Cameron's portrait of Alfred, Lord Tennyson, signed by Cameron, is estimated at $10,000–15,000. A series of 19 photographs taken just after the Trinity Test explosion of the first atomic device could sell for $4,000–6,000.

On Saturday, March 13, Potter & Potter Auctions holds a 617-lot sale of Fine Books & Manuscripts. Among the lots are a 1960 "March for Freedom Now!" placard from a civil rights march on the Republican National Convention in Chicago ($3,000–5,000). A copy of Rembrandt's etched portrait of Jan Uytenbogaert (1635) is estimated at $4,000–6,000. A copy of the 1884 Houghton Mifflin deluxe edition of the Rubaiyat, with illustrations by Elihu Vedder, rates the same estimate.