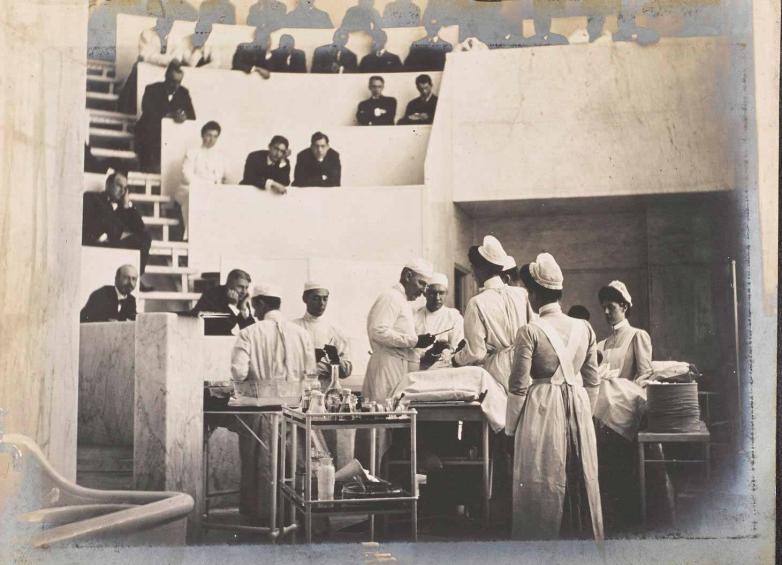 Photograph from an album documenting the years 1903 and 1904 at Johns Hopkins Hospital, offered at Bonhams this week.

Bonhams London holds their Gentleman's Library Sale on Tuesday and Wednesday, February 23–24. The 587 lots are mostly furniture, trappings, and ornamentation, but the first few lots are binding sets. One interesting association item is a nineteenth-century oak bookcase cabinet reportedly given by Sir Walter Scott to the grandfather of Dame Beaufort (£1,200–1,800).

Highlights from the Medical Library of the Late James Tait Goodrich, Part II at Bonhams New York ends on Wednesday, February 24. The 224 lots include a copy of Humphrey Ridley's The Anatomy of the Brain (1695), the first monograph in English devoted to the brain ($6,000–8,000). At the same estimate range are two lots associated with Dr. John Morgan: his Discourse Upon the Institution of Medical Schools in America (1765) and a letter from Morgan (written just a few days before his death) to the Medical Society of New Haven thanking them for the gift of books and sending some in return. An album containing some sixty photographs documenting the years 1903 and 1904 at Johns Hopkins Hospital is estimated at $4,000–6,000. Assigned the same estimate range is a presentation copy of William Osler's Lectures on Angina Pectoris and Other Allied States (1897) to Lewellys Barker.

On Wednesday and Thursday at Lyon & Turnbull in Edinburgh, Rare Books, Manuscripts, Maps & Photographs, in 444 lots. An ex-library copy of the first impression of Harry Potter and the Philosopher's Stone rates the top estimate at £30,000–40,000. A copy of the first edition of the Encyclopédie in 35 volumes could fetch £15,000–20,000. The original watercolor and ink illustrations for Edward Ardizzone's The Young Ardizzone with accompanying material is estimated at £10,000–12,000.

Swann Galleries sells Fine Books & Autographs on Thursday, February 25, in 269 lots. An 1851 Frederick Douglass letter to Sallie Holley, offering her a job at his newspaper, is estimated at $20,000–30,000, as is a copy of Hemingway's first book, Three Stories & Ten Poems (1923). A wide range of interesting material throughout this sale.

Also ending on Thursday is the Comics sale at PBA Galleries. The 417 lots are mostly being sold with no reserve and a starting bid of $10. Among the expected highlights is a copy of Amazing Fantasy No. 15 (1962), signed by Stan Lee. This issue includes the debut of Spider-Man

And rounding out the week on Saturday, February 27: Select Secrets: Rare & Important Magicana at Potter & Potter, in 122 lots. Among the books and printed material in this sale is a lithograph poster of T. Nelson Downs, "King of Koins" (Chicago, c.1905), estimated at $8,000–10,000. A second edition of Reginald Scot's The Discovery of Witchcraft could sell for $7,000–12,000. Some interesting Houdini broadside posters, as well.