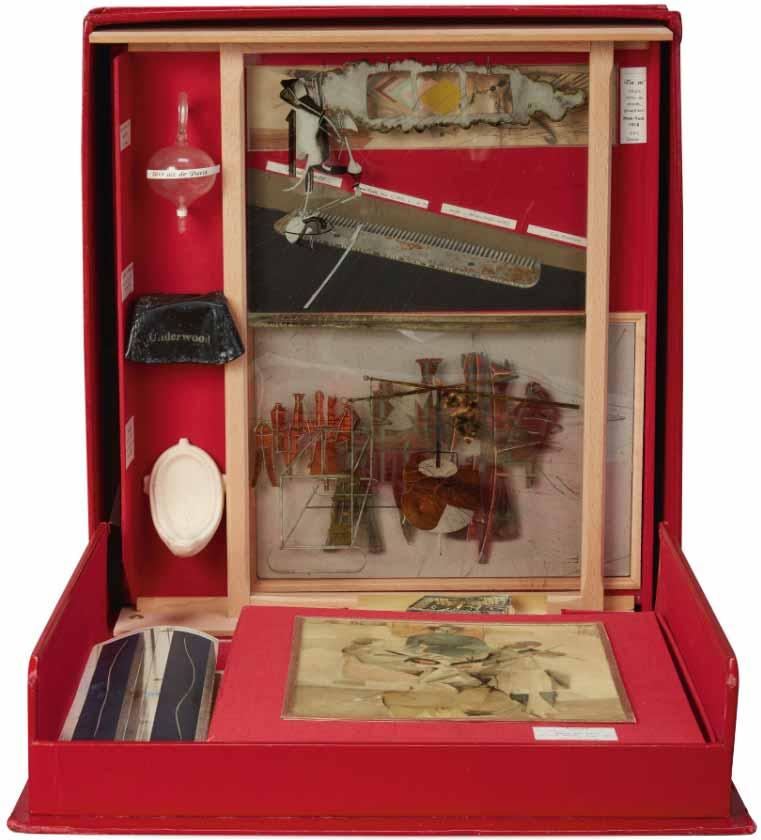 One of 75 copies of the Series F issue of Marchel Duchamp's "Valise in a Box" (1966), offered at Sotheby's this week.

Another whopper of an auction week, as the next round of Aristophil material goes under the hammer.

Sotheby's Dada Data: Books and Boîtes by Marcel Duchamp and Others sale ends on Monday, November 16. The first twenty-eight lots are from the collection of Chilean collector Carlos Alberto Cruz; they include a copy of Duchamps "Box in a Valise" from Series F (1966), the last series issued during Duchamp's lifetime. It is estimated at $150,000–200,000. An out-of-series deluxe copy of Hugnet and Duchamp's La Septième Face du Dé (1936) could sell for $40,000–60,000.

This tranche of Aristophil sales begins on Tuesday, November 17 at Aguttes with a sale of Littérature: Boris Vian et les Maudits (Aristophil 33), in 230 lots. The manuscript of Alfred de Vigny's Les Consultations du Docteur Noir rates the top estimate, at €100,000–150,000. An autograph poem by Rimbaud could sell for €80,000–120,000. The autograph manuscript of Céline's Rigodon and a volume of autograph poems by Paul Verlaine are each estimated at €80,000–100,000.

At Swann Galleries on Tuesday, 299 lots of Fine Books & Manuscripts at Swann Galleries. Sharing the top estimate of $30,000–40,000 are a first edition of Jane Austen's Sense and Sensibility (1811) and a first state copy of Charles Dickens' American Notes, inscribed by Dickens to Richard Henry Dana, Jr.

Artcurial holds the next two Aristophil sales on Wednesday, November 18: Histoire Postale: Guerre de 1870–1871 & Aviation (Aristophil 34) and Littérature: Fonds Romain Gary & Littérature du XVIIe au XXe Siècle (Aristophil 35). A collection of plans and documents relating to the construction of Lindbergh's plane "The Spirit of St. Louis" is expected to sell for as much as €200,000–300,000, and estimated at €75,000–100,000 each are a partial manuscript of Saint-Exupéry's Pilote de guerre and a volume of fifty-one original drawings by Saint-Exupéry. In the second sale, two lots share an estimate of €60,000–80,000: a draft manuscript of Saint-Exupéry's Le Petit Prince and the autograph manuscript of Flaubert's Louis XI.

On Thursday, November 19, Druout sells Livres, Lettres et Manuscrits Autographes (Aristophil 36), in 221 lots. An album of autographs, documents, and original drawings of French Revolutionary figures extra-illustrating a copy of the 1830 reissue of Pierre-Nicholas Coste D'Arnobat's Notes sur les hommes de la Revolution could sell for €200,000–300,000. Many items of interest to the Napoleon collector will be up for grabs in this one.

At Forum Auctions on Thursday, Fine Books, Manuscripts, and Works on Paper, in 447 lots. Albert Sangorski's 1916 illuminated manuscript of Spenser's Una and the Redcross Knight, in a Rivière & Son binding, could lead the way at £20,000–25,000, and there are a few other Sangorski manuscripts and jewelled bindings. This sale also includes some interesting lots for the railway collector.

The Heritage Auctions Comics and Comic Art sale runs from 19–22 November, and includes 1,799 lots. As of Sunday morning, a copy of Detective Comics #27 (May 1939), featuring the first appearance of Batman, had already been bid up to $912,500. The auction house describes this copy as the best one to come up for sale in a decade.

Rounding out the Aristophil sales is a 158-lot auction of Histoire Postale: Guerre de 1870–1871 (Aristophil 40) at Aguttes on Tuesday, November 24. A collection of fifteen letters sent out from the Siege of Paris in the diplomatic bags of the American ambassador rates the top estimate, at €70,000–80,000.