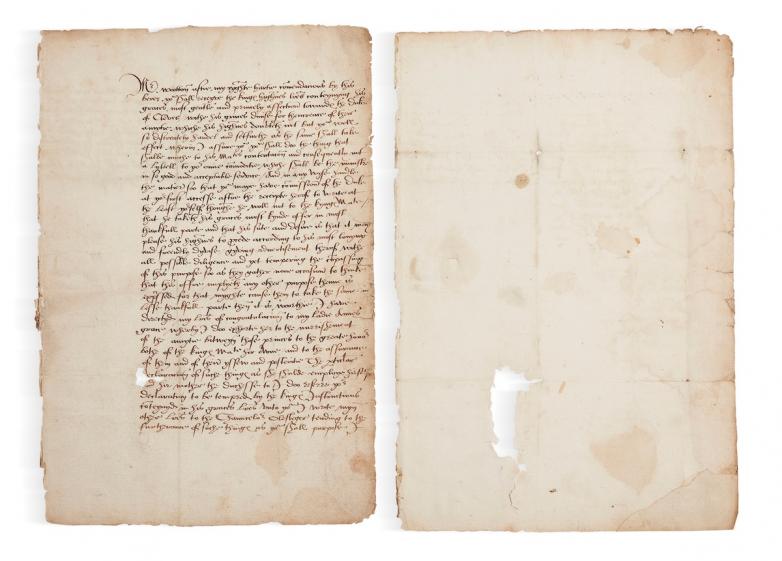 A Thomas Cromwell letter about the marriage of Henry VIII and Anne of Cleves. Estimate: £3,500–4,500.

Another very busy week coming up in the auction world! Here are some of the things I'll be watching:

Lyon & Turnbull hold a 392-lot sale of Rare Books, Manuscripts, Maps & Photographs on Wednesday, with an inscribed copy of the first printing of Harry Potter and the Philosopher's Stone rating the top estimate at £80,000–120,000. Also on offer in Edinburgh are a first edition copy of Fleming's Casino Royale (£20,000–30,000); several Robert Burns letters; and a Thomas Cromwell letter about the marriage of Henry VIII and Anne of Cleves (£3,500–4,500).

Also on Wednesday, Travel, Natural History, Americana & Sporting Books at Doyle (soft close will begin at 10 a.m. EDT). Among the interesting lots is a poster for the Titanic ($1,000–1,500).

Rounding out Wednesday's sales, Bibliothèque R. & B. L.: une décennie de ventes at Sotheby's, in 274 lots. Sharing the top estimate at €30,000–40,000 are a set of the Marquis de Sade's La Nouvelle Justine and L’Histoire de Juliette and a first edition of Céline's Voyage au bout de la nuit (1932). Even more French literature to choose from in this one!

At Forum Auctions on Thursday, Books and Works on Paper, in 245 lots.

Two Christie's sales end on Thursday. The first, Selections from the Library of Lorenzo H. Zambrano: Latin Americana, Science, and Literature, includes 51 lots, among them a very nice first edition of Darwin's Origin ($100,000–150,000) and a copy of the colored issue of Viscount Kingsborough's Antiquities of Mexico ($80,000–120,000).

The second Christie's sale ending on Thursday is The Open Book: Fine Travel, Americana, Literature and History in Print and Manuscript, in 112 lots. Expected the lead the way here with an estimate of $300,000–500,000 is the September 20, 1814 issue of the Baltimore Patriot and Evening Advertiser, containing the first dated printing of "The Star-Spangled Banner" (being deaccessioned as a duplicate by the American Antiquarian Society). Estimated at $180,000–250,000 are a rare copy of Martín Fernández de Enciso's 1519 account of the Spanish explorations in the Americas and an early French compilation of "New World" travel accounts, which appears to be unrecorded in auction records. A copy of Audubon's Quadrupeds is also on the block, estimated at $120,000–180,000.

Also ending on Thursday is the 412-lot PBA Galleries timed-lot sale of Publications of the Arthur H. Clark Company.