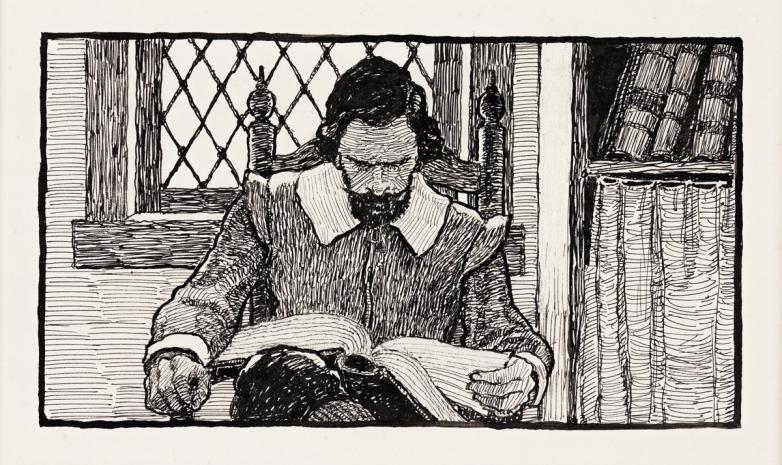 Although N.C. Wyeth was born the same year that Henry Wadsworth Longfellow died, 1882, the two turned out to be perfect collaborators on the 1920 edition of "The Courtship of Miles Standish," Longfellow’s long-form narrative poem about the Plymouth Colony, first published in 1858. Wyeth had made a name for himself in the early twentieth century as a dramatic illustrator, and one who could revive “classics” with his pen. His art comes to auction fairly often, with mixed results. In 2019, however, a painting he made for The Boy’s King Arthur (1917) sold for $615,000.

According to Swann Galleries, this popular edition was commissioned to commemorate the first “Pilgrim Tercentenary” (honoring the founding of the colony in 1620), and “captures the essence of Longfellow's narrative poem about Plymouth Colony's famous love triangle.”

All four pieces are from the Kelly Collection of American Illustration, described on its website as “a private collection dedicated to the acquisition, preservation, research and exhibition of Golden Age American illustration." They did not return an email to comment on the sale.