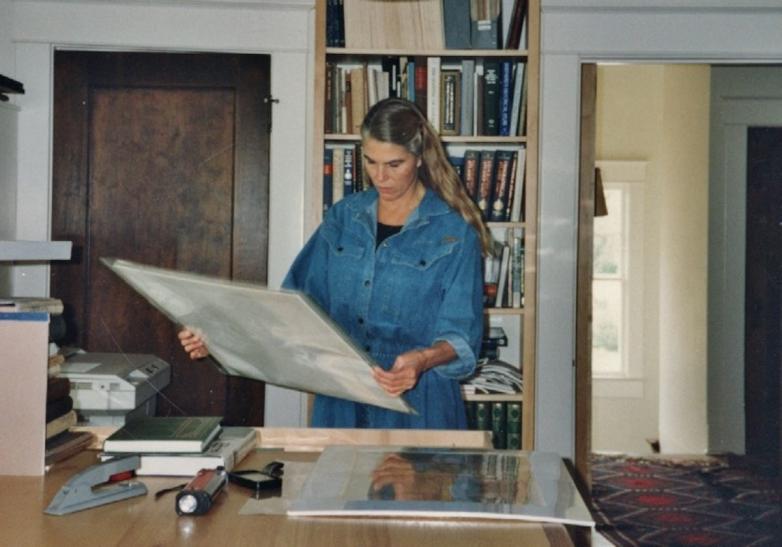 We learned earlier this week about the death of antiquarian bookseller Dorothy Sloan, “a pioneering woman in the book trade,” according to fellow bookseller John Windle. Kurt Zimmerman, a collector who worked for Sloan during his graduate school years in the early 1990s, said, “Her research and cataloguing skills were unparalleled, and she took great pride in the quality of her catalogues … She was witty, funny, and occasionally exasperating – she demanded the best out of you and expected complete 24/7 commitment to rare bookselling. Her enthusiasm for books and maps has stayed with me. I was fortunate to have her as an early mentor.”

Sloan’s daughter, Jasmine Star, penned the followed obituary, which she is allowing us to share.

The rare book world has lost another giant. Dorothy Sloan (1943­-2021) died on March 14. A fifth-generation Texan, Dorothy was born and raised in Houston, where she met her first husband, Stephen M. Sloan, and where both of her children, Julia Ann Sloan (now Jasmine Star) and Anthony Vail Sloan, were born. After Anthony, her youngest child, started school, Dorothy returned to her own education, ultimately earning a Bachelor of Arts in American Studies at the University of Texas in Austin, graduating with high honors. The family then moved to San Francisco, where Dorothy fell headlong in love with rare books—a passion that remained paramount for the rest of her life.

In San Francisco, she took her apprenticeship at the venerable firm John Howell Books. In her own words, “I was immediately thrown into the heady inside track on rare books, deals, dealers, and clients. Every single day was exciting to me, and I threw myself wholeheartedly into doing the best job I could”—an ethic that remained with her throughout her career, as all who knew her would attest.

In 1979, she returned to Texas, where she worked for the Jenkins Company until 1984. To cite Dorothy, “Again, I stumbled into an accidental learning experience of unusual depth and opportunity. Jenkins had purchased the Eberstadt collection [and] there were mountains of unprocessed books. It was such a thrill to go through a pile of what appeared to be late nineteenth-century dilapidated atlases and suddenly find things like a Choris.”

Dorothy met her second husband, Peter Oliver, in 1983, and with his support, she established her own business, Dorothy Sloan Rare Books, in 1984, a challenging endeavor in a trade dominated by men. Never one to be limited by others’ expectations, Dorothy applied herself ceaselessly. Thanks largely to her unparalleled scholarship, persistence, and ethics, she rose to become one of the leading lights of the rare book trade in the United States and beyond.

Over the next thirty-six years, she was both thrilled and honored to handle many incredible items, from magnificent imperial folio Audubon prints to, not one, but two complete collections of the elusive Zamorano 80, along with many other invaluable materials, from manuscripts and artworks to countless maps, many of them seminal and groundbreaking. Among her many achievements, perhaps one of the most impressive was becoming an auctioneer—amazing given how shy she was.

Although Dorothy Sloan is gone, her legacy will live on through her incomparable catalogues and her website. As long as rare books, bibliographers, and rare book dealers exist, she will be remembered, and her body of work will illuminate the way forward.

Dorothy is survived by her daughter, Jasmine Star, and her husband, Peter Oliver. The cause of death was advanced dementia. The progression of the disease was shockingly rapid—mercifully so for Dorothy, who would not have wanted to linger in that state. Those who knew her will be glad to learn that, in her final months, she was peaceful and even cheerful. Should you wish to contact the family, you can reach Jasmine at jasminestar @silverstar.com. Should you wish to memorialize Dorothy, consider donating to the Cure Alzheimer’s Fund (www.curealz.org) so that, in the future, others might be spared the ravages of this terrible disease.

Alternatively, memorial gifts may also be made to the Dorothy Sloan Fellowship Fund at the DeGolyer Library, SMU. Proceeds from this fund will be used to support visiting scholars at any stage of their careers who plan to pursue research on bibliographical projects or women’s history at the DeGolyer Library. Anonymous individuals have pledged a 1:1 matching gift of up to $30,000. Donors may send checks to the DeGolyer Library, Box 750396, Southern Methodist University, Dallas, TX 75275. Please add  “Sloan Fund” to the memo line. For more information, contact degolyer @smu.edu. Contributions are fully tax deductible.