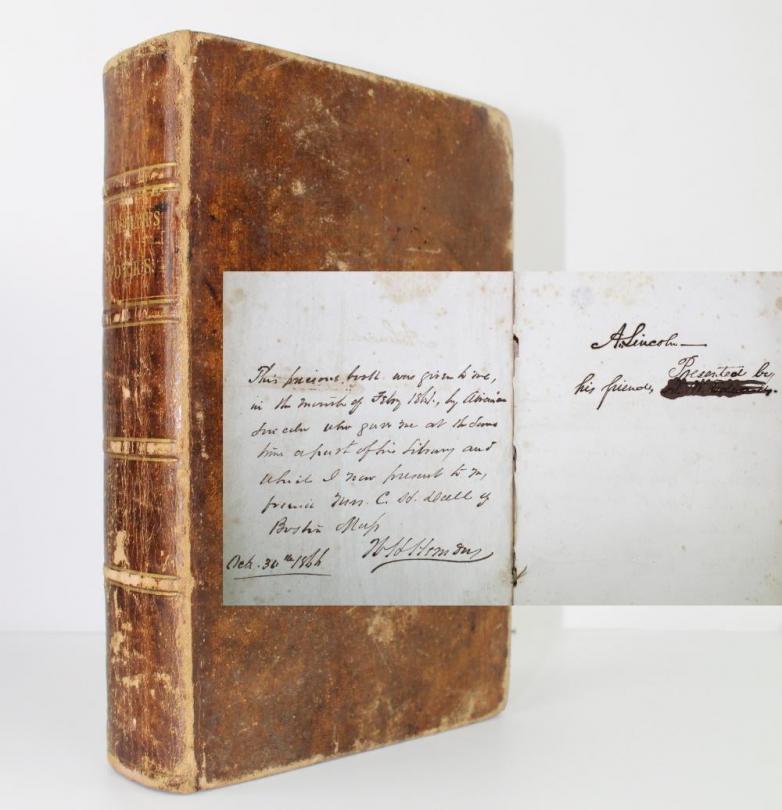 Copy of the book The Miscellaneous Works of Oliver Goldsmith, by the famed American author Washington Irving, with an ownership signature by Abraham Lincoln ($175,000).

Westport, CT – Eager bidders gave a tip of the top hat to Abraham Lincoln in University Archives’ online auction held January 16th. Several historically significant lots pertaining to Honest Abe were offered in the sale, with two of them combining for $250,000. In all, 281 lots came up for bid in an auction that grossed nearly $900,000, including the buyer’s premium.

The sale’s top earner was a copy of the book The Miscellaneous Works of Oliver Goldsmith, by American author Washington Irving, with an ownership signature by Lincoln ($175,000). The book, which was formative to Lincoln’s views on slavery, had been given to him by his brother-in-law, Ninian W. Edwards. Lincoln later presented it to his law partner, with an inscription.

The runner-up lot was also Lincoln related: a carte de visite photograph of the president, signed by him (as “A. Lincoln”) and PSA graded Gem Mint 10 ($75,000). The photo had been found in the personal photo album (included in the lot) of the wife of Colonel Benjamin Rosson, whom Lincoln had personally thanked in his “Lincoln Log” in 1864 for service during the Civil War.

University Archives is always seeking quality consignments or items for outright purchase. The firm’s next online-only auction is slated for Wednesday, Feb. 26, with a 10:30 am EST start time. Up to 100 percent cash advances are available for great items valued from $5,000 to $5 million.

The auction was packed with unique relics, photos, autographs, books and ephemera, to include 55 of the 56 Declaration of Independence signers (all except Button Gwinnett), plus presidential items (high-ticket Lincoln, Jefferson, Washington, Teddy Roosevelt, Richard Nixon and FDR).

Also offered were literary items (including five lots of Hemingway), music (the Beatles, Elvis Presley, Jimi Hendrix and others), entertainment (Marilyn Monroe, Harry Houdini and others), and science (to include Edison, Einstein and Freud, with a special emphasis on psychology).

Reznikoff added, “Investing in Declaration Signers seem to be as safe as investing money in the bank. Very few people have heard of Arthur Middleton, but an item signed by him brought nearly three times the price of a decent George Washington letter. The Revolutionary War continues to garner attention, while the Civil War has presented many opportunities and should resurge soon.”

Reznikoff said the rock ‘n’ roll category did particularly well in the January sale, pointing to a Jimi Hendrix signed Woodstock ticket, authenticated and encapsulated by Beckett just a month before the 1969 rock festival, which sold for nearly $6,000. “We are now the go-to place for Americana, the Declaration Signers and all wars,” he said. “We welcome all fine consignments.”

Following are additional highlights from the auction. Internet bidding was facilitated by LiveAuctioneers.com, Invaluable.com and Auctionzip.com. A little fewer than 5,000 people registered to bid online and combined to place 6,216 bids. All prices include buyer’s premium.

The Arthur Middleton signed document was one of the crown jewels of the lots dedicated to Declaration signers. Written in Philadelphia and dated May 20, 1782, it was not only signed by Middleton (a rarity in itself), it also had the signatures of Supreme Court Justice John Rutledge (also very rare) and David Ramsay, a member of the Continental Congress. It sold for $40,625.

Other noteworthy lots from the Declaration signers included the following:

A pristine document from the 2nd Congress, signed by Thomas Jefferson (himself a Declaration signer), regarding a lighthouse at Cape Fear, framed to a size of 20 inches by 29 inches and signed (in print) by Washington and Adams, brought $10,625. Also, a one-page letter signed by George Washington, written in 1791 and regarding Mount Vernon and its crops but also talking about one of his slaves, Davy Gray, in whom Washington placed great trust, realized $15,000.

The 1960 “Suit of Lights” three-piece outfit worn by Ernest Hemingway’s friend, the Spanish matador Antonio Ordonez, gaveled for $13,750. Hemingway purchased the ornate and heavily ornamented outfit after profiling Ordonez in a series of magazine articles. Also, a 16th century printing of Petrus Lombardus’s Sentences, with a panel-stamped calf displaying the arms of King Henry VIII and his Queen Katherine of Aragon in the panel-stamped calf, finished at $11,000.

A presentation copy of Addresses of Franklin D. Roosevelt and Winston Churchill -- a war dated book given to First Lady Eleanor Roosevelt and inscribed by FDR, "For E.R. A month's episode, with much love from FDR Christmas 1942", realized $34,375; while three items pertaining to FDR’s New Deal, all on White House stationery, including a June 11, 1934 letter to the Speaker of the House of Representatives of the 73rd Congress, implementing the deal, signed, hit $20,000.

A limited first edition set (#18 of 150) of Winston Churchill’s four-volume work of Marlborough (George G. Harrap & Co., London, 1933-1938), about John Churchill, the Duke of Marlborough (1644-1722), inscribed by Churchill to his publisher, fetched $11,250. Another noteworthy lot pertaining to Abraham Lincoln is the group of nearly 200 photos of Lincoln, Mary Todd Lincoln, Robert Todd Lincoln and many associates, 191 photos in all, in an album, that brought $11,250.