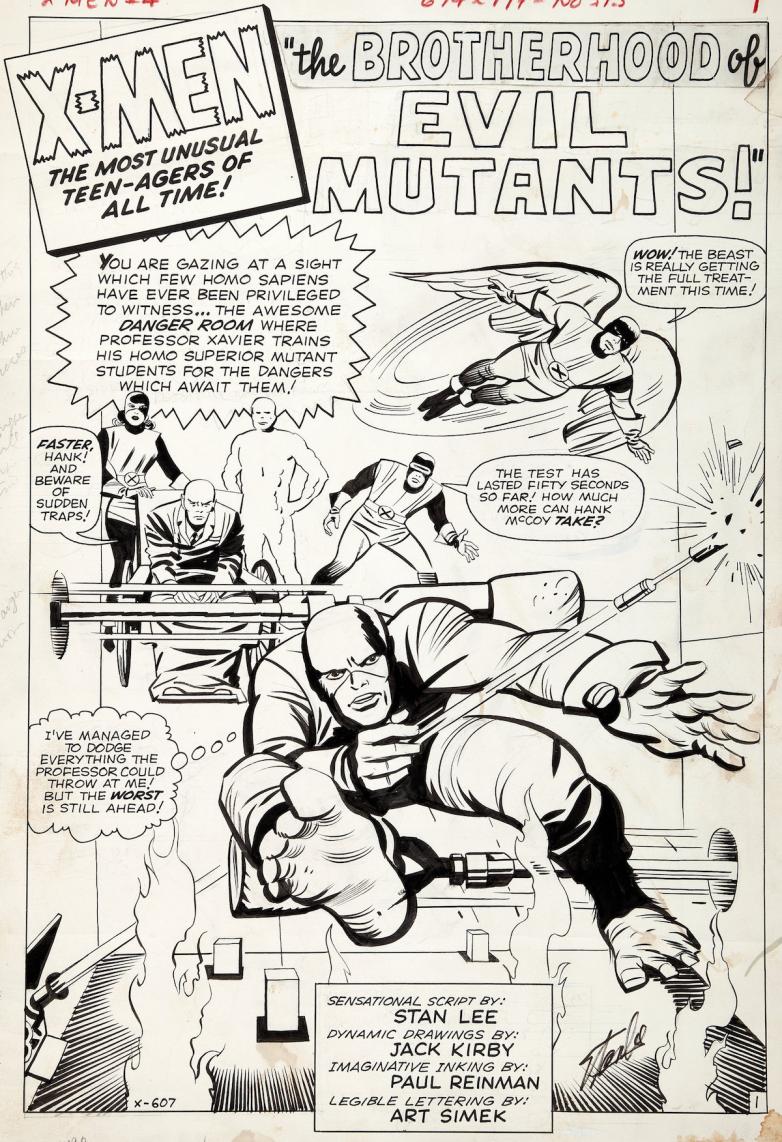 Dallas – Most of them are here, their creations spread far and wide among the more than 500 pieces of original comic-strip and comic-book art found in Heritage Auction’s July 9-12 Comics & Comic Art event -- the greats, as well as The Greatest Who Ever Was.

And Jim Davis, who has unleashed more than two dozen Garfield strips that until now have never been out of his sight.

That’s to name but a few of the many artists here who breathed life into superheroes, gave flight to writers’ fancies and continue to inspire, awe and delight generations of readers.

In the summer event, there are original pages from groundbreaking titles and breakthrough issues, including Brian Bolland’s work on writer Alan Moore’s Batman: The Killing Joke, which served as inspiration for Todd Phillips’ big-screen Joker. And it’s not just comics: One of the myriad centerpieces of this art event is a Frazetta oil painting of Battlestar Galactica’s crew made for TV Guide in 1978.

“In the 1970s, people like Clint Eastwood, Sylvester Stallone, George Lucas, Dino De Laurentiis and others endeavored to get Frazetta to paint their promotional pieces – with varying degrees of success,” Heritage Auctions Vice President Barry Sandoval said. “Battlestar Galactica’s producers sealed the deal, and this stunning original resulted from that.”

This auction contains enough covers to stuff full a spinner rack with childhood memories and milestone moments, including Dave McKean’s haunting cover piece, which is more collage than painting for Neil Gaiman’s Sandman No. 6 and stuns when seen in person; Tim Sale’s striking silhouettes of Batman and Cat woman for The Long Halloween No. 10; and Ross Andru, Neal Adams and Dick Giordano’s iconic back cover for the first DC-Marvel team-up Superman vs. The Amazing Spider-Man. That image of a grinning Man of Steel standing back-to-back with the Web-Slinger was thumbtacked to countless walls in 1976.

We’re but a fraction of a fraction through this event, and still we have yet to even mention the one who hovers over it all:

His name appears on 19 of the original pieces found in this event, including the splash page to X-Men No. 4 in 1963 – the only page from this early-days issue to hit the auction block. That alone, coupled with its inclusion of Professor X and the X-Men’s founding five, makes it remarkable, desirable, worth every cent and beyond of the $100,000-and-up estimate.

But on the back there’s even more Marvel Age history: Kirby’s handwritten brainstorm during which he struggled to name a character who would make her debut in that issue alongside the other members of the Brotherhood of Evil Mutants. Kirby tried numerous monikers, among them Jinx, Siren, Evil Eye, the Sorceress and variations on The Witch, Witch Woman, Witch Lady, Lady Witch and Miss Witch. In the end, he settled on Scarlet Witch.

“We have at least three major trophy pieces by Kirby in this event,” Sandoval says. “In addition to this early X-Men splash page, there’s the two-page recap of the Fantastic Four’s origin told during the Human Torch’s first solo story in Strange Tales No. 101 and the Fantastic Four No. 95 cover featuring the entire team.”

And more and more still on top of that, including:
•    A pin-up of Alicia Masters, Ben Grimm’s girlfriend, from Fantastic Four Annual No. 2
•    The Thing’s first appearance outside of a Fantastic Four issue, featured alongside the Human Torch in pages from that same issue of Strange Tales No. 101
•    And a self-portrait of Kirby, done with Joe Sinnott, featuring several of his most famous creations, The Thing and Doctor Doom and the Red Skull

The moniker “The King of Comics” was bestowed upon Kirby because of the iconic characters he created, the dozens of titles he worked on, the inescapable impact he left on the industry he helped launch. His imprint, his influence, can be felt throughout this auction in works by peers and pupils, even on the pieces far afield from his own work.

That would even include the work of Chris Ware, who began his career in the back pages of the University of Texas at Austin’s newspaper in the late 1980s and became the first comics artist asked to exhibit at the Whitney Museum of American Art biennial exhibition. In 2011 The Comics Journal linked Kirby and Ware through content and comment – as artists who hide themselves inside their own works to explore sweeping existential themes usually ignored by the medium.

There are two Ware pieces in this event, including the complete one-page story “Rusty Brown” from Acme Novelty Library No. 15. An early, heartbreaking piece by the master of the genre.

But there is room enough in this sale for those who had no great connection to or affinity for Kirby – mythic underground creator Robert Crumb, for instance, who once said he had “zero interest in Kirby.” But Crumb did admire the man, “the tough guy who grew up in New York City in some tough neighborhood.”

Crumb is represented in this sale with his own single-page story, "Kosmik Kapers,” which appeared in Zap Comix No. 0 in 1968 – the issue meant to be Zap’s official bow, had some artwork not wound up (accidentally) traveling to India for a brief respite.

“The last 100-plus years of comic strips are also represented in this sale,” Sandoval said. “There’s everything from a Peanuts Sunday strip with a baseball theme, a Tarzan Sunday strip hand-colored by the great Burne Hogarth and, from 1937, one of the few Thimble Theatre dailies by E.C. Segar featuring Popeye, The Jeep and the Sea Hag known to exist.”

These are some of the holy grails of collecting, the rare, raw singular renderings of geniuses before they were mass-produced for newspapers and spinner racks and comic-shop shelves. Some were made by a king. But all are deserving of their place in the citadel.