Exceptional Book of Hours a Highlight of Christie’s ‘Classic Week’ 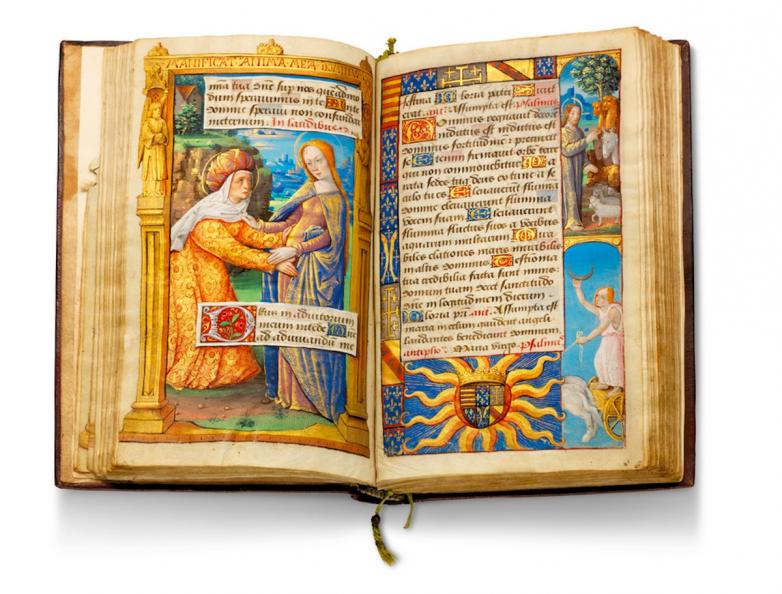 Clementine Sinclair, Head of Sale, comments, "This season’s Classic Art Evening sale presents a rich array of works of art and objects of different periods and mediums which are unified by their exceptional artistry and craftsmanship. Taken collectively, they give a fascinating overview of developments and innovation, from antiquity to the early 20th century, and offer both interesting parallels and juxtapositions. It will be exciting to see these works of art exhibited together when the view opens on 25 July at Christie’s London."

Highlights from the sale include:

Lot 8, Sir Peter Paul Rubens (Siegen 1577-1640 Antwerp), Portrait of a young woman, half length, holding a chain. This powerful ad vivum portrait is an early work, datable to 1603-06, either painted during Rubens’ years in Italy or during his first trip to Spain. Showcasing the artist’s bravura painting technique, which adds a sense of modernity to the work, it may have been an unfinished painting or a sketch painted quickly from life that would serve as a model for a more finished portrait. It is one of the most exciting recent discoveries in the artist’s portrait oeuvre. (Estimate £4,000,000 - 6,000,000)

Lot 17, The Almanac Hours, a masterpiece by Monypenny Master of the Monypenny Breviary and Associates. The Almanac Book of Hours, in Latin and French, illuminated manuscript on vellum [Bourges, c. 1490s], is a lavishly illustrated manuscript of outstanding iconographic variety, its exceptional border cycles including weeping eyes for the Passion, an Armorial, the Planetary Deities, the Liberal Arts, the Fifteen Signs of Doomsday and a Dance of Death featuring the illuminator himself. The Almanac Hours takes its name from the quantity of pictorial information in its extraordinarily rich border decoration, comprising some 400 subjects. Its artist, responsible for most of the miniatures, can be identified as the Monypenny Master, noted for his successful interpretations of unusual subjects and named from his work alongside Jacquelin de Montluçon in the Monypenny Breviary of c.1485-90, one of the great monuments of French illumination. (Estimate £400,000- 600,000)

Lot 6, Burgundian Master, circa 1480, Portrait of a man holding a prayer book, bust-length, in a fur-lined coat and cap, is a highly refined Northern Renaissance portrait. Previously attributed to Quentin Massys, the modelling of the flesh tones shows the influence of Hans Memling, while the drawing of the hands shows a debt to Rogier van der Weyden. It could originally have formed part of a diptych, possibly paired with a devotional image of the Virgin and Child. It has exceptional provenance, having been part of the celebrated collections of both Sir Robert Walpole at Houghton Hall, Norfolk and Horace Walpole at Strawberry Hill. (Estimate £400,000-600,000)

Lot 15, Attributed to Antonio Lombardo, (circa 1468-1516 Ferrara), is a marble relief depicting The Death of Lucretia. An important rediscovery, this relief was sitting unrecognized in a private European collection. It was executed in circa 1510, probably for the Duke of Ferrara, Alfonso d’Este, for whom Lombardo was court sculptor between 1506 and 1516. Lombardo was from a family of important sculptors and architects working at the end of the 15th and beginning of the 16th centuries. Lombardo’s works can be found in numerous museums around the world; the largest single holding is 28 panels in the Hermitage Museum, St. Petersburg, which are traditionally thought to have been executed for the celebrated Camerino di Alabastro in the Ducal palace in Ferrara. The present relief is related to those panels as well as a series of smaller reliefs, many of them depicting tragic heroines. Among this latter series this is the largest and the most complex. (Estimate £500,000-800,000)

Lots 56, 57 and 58, are three sheets by Giovanni Domenico Tiepolo (Venice 1727-1804), Punchinello learning to walk, signed ‘Dom.o Tiepolo f’. Among the finest examples from the celebrated Punchinello series these three works were drawn towards the end of the artist’s life, the series (totalling 104 sheets) which illustrates the life of Punchinello, a central character from Italian popular theatre, or commedia dell’arte. This series is generally considered Tiepolo’s greatest artistic achievement. The drawings were bought over eighty years ago by Sir Brinsley Ford, and have remained in the same family ever since. The outstanding and timeless quality, as well as their condition make these drawings particularly appealing. (Estimate £300,000-400,000)

Lot 42, The Marquess of Rockingham’s silver sauceboats. A pair of George II sauceboats, stands and ladles. The stands bear the mark of Nicholas Sprimont, London, 1746, while the sauceboats and ladles are unmarked, attributed to Nicholas Sprimont, circa 1745. These museum quality rococo masterpieces feature bands of shells and crustacea, recalling the magnificent pieces Sprimont created for the Prince of Wales’s Marine Service, which remains in the Royal Collection. Created for the Marquess of Rockingham, they were used at his London residence and at his seat Wentworth Woodhouse. The design of the distinctive stands was no doubt much admired. Sprimont later employed the form at the Chelsea Porcelain Manufactory. (Estimate £70,000-100,000)

Lot 53, The James Cox ‘Spinning Star’, a George III gold and agate mounted automaton watch, with an ormolu and agate musical and automaton cabinet from the workshop of James Cox, London, circa 1770. The watch is signed and numbered '1391', the cabinet’s musical movement numbered ‘11’, and adapted to accommodate the timepiece. Dating from the eighteenth century, this magnificent watch and musical and automaton cabinet is a tour-de-force of the craftsmanship of the London jeweller, gold/silversmith and automata supplier, the pre-eminent and entrepreneurial James Cox (c. 1723-1800) of 103 Shoe Lane, London. James Cox led the field in the export of watches, musical clocks and automata to the Qing Dynasty Emperors and the Imperial Court. His most celebrated works include the great peacock automaton in the Hermitage Museum in St Petersburg, and the Silver Swan automaton now in the Bowes Museum, Barnard Castle. The St. James's Chronicle of 27-29 August 1772, reported that a shipment of 'English Toys' had been refused entry to China and had returned to London. This appears to have been the impetus behind Cox's opening of a Museum at Spring Gardens, Charing Cross, where the paying public could view his stock in trade. It was in the kunstkammer tradition and such private museums of curiosities were much in evidence at this period; such as Sir Ashton Lever's 'Leverian' (opened 1775). 1760s and 1770s saw the British craftsman look beyond the home market exporting goods to all corners of the world. (Estimate £400,000-600,000).

Lot 38, Sir Edward Coley Burne-Jones, Bt., A.R.A., R.W.S. (Birmingham 1833-1898 London). A folio of twenty letters, the majority illustrated, together with seven envelopes. Nineteen are letters to the artists granddaughter Angela Thirkell (née Mackail), and one apparently to his daughter Margaret Mackail (née Burne-Jones). These are extraordinary communications between Burne-Jones, often unwell, and his beloved grand-daughter, who he’s unable to visit. Eight of the letters are on a larger scale (12x 8 ins), all are vividly coloured and full of his mischievous sense of humour. His gently mocking self-caricature as the melancholic bearded artist appears in many of the drawings, at times with the diminutive figure of Angela beside him - tugging at his trouser leg. Written when the author was elderly and overly concerned with his health, these letters are likely to resonate widely in the current global climate. The letters are being sold by the family by direct descent and were included in the recent Burne-Jones exhibition at Tate Britain 2018-2019. (Estimate £80,000-120,000)

Lot 10. Sir George Clausen, R.A., R.W.S. (1852-1944), Head of a young girl (Rose Grimsdale), executed in chalk on paper. Clausen is a key British Impressionist artist and like many other painters of his generation, Clausen was fascinated by the romantic idea of the human spirit soaring at the sound of the lark. Children in country areas were taught to read the sky, and the movement of birds was a vital clue to what might happen to untended crops or livestock. Rose Grimsdale was Clausen’s favourite model of the late 1880s and early 1890s. When it was exhibited in 1890, the reporter for The Illustrated London News declared that of ‘Mr George Clausen’s brilliant studies of peasant life ... the head of a red-haired child recalling somewhat the expression and colouring of Reynolds’ Infant Samuel’ was particularly praiseworthy’. (Estimate £250,000-350,000)

Lot 41, Joachim Wtewael (Utrecht 1566-1638), The Dutch maiden leading the Prince of Orange to battle, signed ‘Jo Wte/ Wael’. Previously unknown, this sheet is an important addition to Wtewael’s small drawn œuvre which consists of some 30 drawings. Wtewael was one of the most celebrated Utrecht artists of his time, and this work depicts the revolt of the Northern Netherlands against the Habsburg rule of King Philip II of Spain. It’s part of a series of designs for glass panels which were commissioned in 1610 for the town hall of Woerden. (Estimate £100,000-150,000)

Lot 34, Property of Gloria, the late Dowager Countess Bathurst, (1927- 2018). Sarah Bernhardt (French, 1845-1923), Autoportrait en chimère, encrier (Self-portrait as a Chimera, inkwell). Circa 1879. This fantastical inkwell is a self-portrait of the great actress and artist Sarah Bernhardt in the form of a chimera or sphinx. A rare and early cast of the model, this example is provenanced as a gift from Sarah Bernhardt to Sir Algernon Borthwick Bt. (1830-1908), later Lord Glenesk (cr. 1895), who was the owner of the Morning Post (which merged with The Daily Telegraph in 1937). Lord Glenesk’s daughter and sole heiress, Lilian Margaret Frances Borthwick married Seymour Bathurst, 7th Earl Bathurst in November 1893, and the inkwell passed by descent to be offered here for the first time in its history. (Estimate £20,000-30,000)

Lot 61, Ferdinand Georg Waldmuller (Austrian, 1793-1865). View of Lake Altaussee and the Dachstein, 1834. This fine oil on panel was restituted in 2020 to the heirs of Dr. Herman (1860-1953) and Hortense Eissler (1895-1983). It was part of a very significant collection which included works by Rodin, Goya, and Rudolf von Alt. The painting was acquired by the dealer Maria Almas-Dietrich in May 1939 for the ‘Linz Collection’, then stored in the `Altausee salt mine from 1943 (located in the foothills to the right of the painting) and seized by the Monuments Men in May 1945’. It has been on loan to the Staatlichen Kunsthalle in Karlsruhe since 1949. The work exhibits all the essential qualities of a Biedermeier Landscape, with its fine glazes, inspired nuance of colour and well balanced composition making it a significant work within the artists oeuvre. Landscapes from this period by Waldmüller are highly regarded by collectors for their modernity. (Estimate £100,000-150,000)

Highlights from the Classic Art Evening Sale: Antiquity to 20th Century auction will be on view at Christie’s London in the lead up to the sale from 25 – 29 July. The sale is available to browse online now at www.christies.com

The sale will close a newly expanded and hybrid series of eight on-line and four live sales comprising Classic Week, taking place from 1 – 29 July. Classic Week celebrates craftsmanship and the story of creativity across time from antiquity to the 20th century, and across artistic media including Old Master and 19th Century Paintings, Drawings and Prints; Sculpture and Antiquities; Books and Manuscripts; and the full diversity of Decorative Arts.