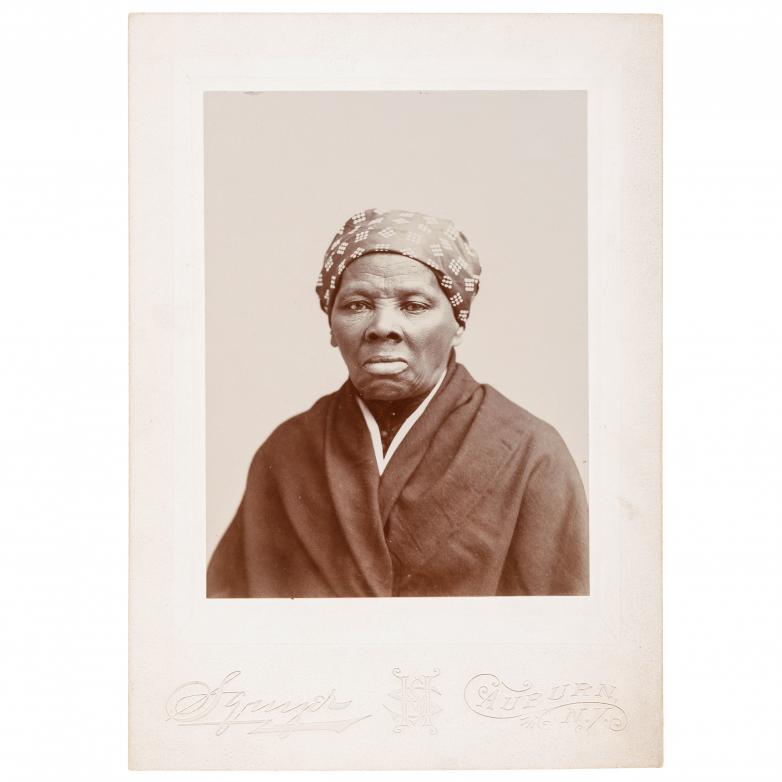 One of the highlights of the auction is the last known studio portrait of Harriet Tubman taken in her hometown of Auburn, NY in 1892. The estimate is $10,000-15,000.

Chicago — Cowan’s, a Hindman Company, is pleased to offer Part I of The Road West: The Steve Turner Collection of African Americana at Hindman's Chicago salesroom on February 20, 2020. Part I of this remarkable collection features over 300 lots illustrating the history of African Americans and their role in settling the western frontier in the 19th and early 20th century.

“This important collection helps document the tragedies and triumphs of the too often forgotten African Americans who transcended racial stereotypes to redefine the American Dream in the west,“ said Wes Cowan, Vice Chairman of Hindman Auctions. “It is the result of the dogged, determined vision of Steve Turner, whom I’ve known for many years. We’re thrilled to bring this material to market.”

Steve Turner is perhaps most widely known for his Los Angeles-based contemporary art gallery but he has spent his entire life assembling an unrivaled historical record of the American west. His focus on African Americana began with a single photo at an antique show in 1996.

“When I went to pay for the image, I asked the dealer to offer me similar material whenever he came across it,” recalled Turner. “His reply has stuck with me: ‘Forget about it. Images of African Americans are as rare as hen’s teeth.’ I would find over the next two decades that he was unfortunately right, but with hard work, good luck, and a few dollars, I was able to put together a collection that will hopefully shine a brighter light on the lives of these pioneers.”

The Turner Collection tells the story of achievement, participation, and pursuit of the American dream by these western pioneers. Photographs, manuscripts, and other relics depict the everyday lives of artists, attorneys, barbers, boxers, cowboys, musicians, soldiers, and more.

Among these pioneers, none are more famous than the Buffalo Soldiers. Part I of the Turner Collection features an extraordinary group of images of the famed Buffalo Soldiers, including a full-length portrait of a soldier wearing a buffalo coat. The rare cabinet card should sell for between $8,000 and $10,000.

The story of African Americans in the west is best understood within the context of the great leaders who inspired those who made the journey west. One of the highlights of the auction is the last known studio portrait of Harriet Tubman (1848-1905) taken in her hometown of Auburn, NY in 1892. Despite her fame, there are remarkably few photographs of Tubman, who retired from public life immediately following the Civil War. Just six studio portraits of her are known to exist and of those, this photo is the largest, giving viewers the clearest and most detailed look at her determined gaze. The image is expected to sell for $10,000 to $15,000.

The walking stick of Frederick Douglass (1818-1895) is another lot expected to bring a great deal of attention from collectors. During the last decade of his life, Douglass traveled frequently to give speeches all across the country. In early 1888, Douglass embarked on a speaking tour of South Carolina and Georgia. While in Charleston, South Carolina, he was honored by an African American militia unit calling themselves the Douglass Light Infantry who serenaded him at their armory and presented him with this walking stick. The stick is decorated on the collar with strawberries, symbolizing righteousness and spiritual merit in Christian art and should bring $3,000 to $5,000.

The top lot of the auction is expected to be an oil on canvas by Grafton Tyler Brown (1841 – 1918) entitled Mitchell’s Point, Looking Down The Columbia River. Born in Harrisburg, Pennsylvania in 1841, Brown moved to California in 1858 where he became California’s first African American city view artist and lithographer. As a prolific and talented topographic artist and lithographer, he created images that showcased the natural beauty and essential character of the developing frontier. This painting depicts a breathtaking Oregon river landscape as a group of Wisham Native Americans make camp along the shore. The painting is estimated to bring $30,000 to $50,000.

Though the bulk of the collection focuses on the period of westward expansion between the Civil War and World War II, some post-war subjects were simply too important not to be included. The auction will feature posters, photographs, and other ephemera from the Civil Rights Movement and the Black Panthers.