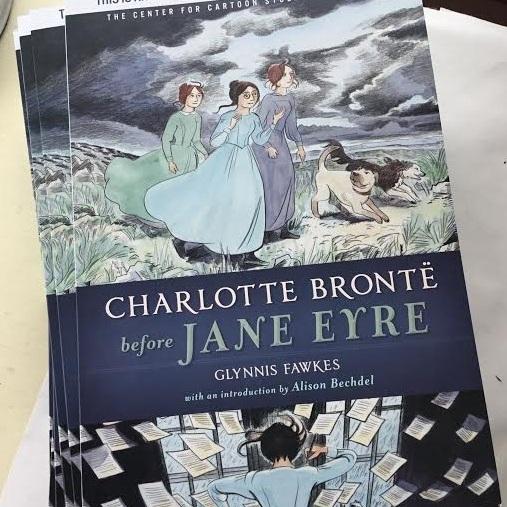 The reading public has long been fascinated with anything having to do with Charlotte Brontë, the author of Jane Eyre and the source of untold spinoffs, movies, and commentary. In fact, Jane Eyre has never gone out of print and has been translated into nearly 60 languages.

Now from the Center for Cartoon Studies and Hyperion Books comes a book that explores the woman behind the classic in Charlotte Brontë before Jane Eyre. Written and illustrated by cartoonist Glynnis Fawkes, the 112-page graphic novel takes middle-grade readers on a trip back to 1837, when young Charlotte faced unrelenting discouragement and setbacks on the path to literary success, all set to the brooding backdrop of the isolated parsonage the Brontë family called home.

Fawkes’ pen-and-ink illustrations are crisp and vivid, capturing in shades of black, white, and gray the oppressive and highly patriarchal world Brontë navigated. It’s a biography that examines Brontë’s formative years and the challenges she faced. Fawkes intersperses Brontë’s own words, where possible, to better express her personality.

Fellow cartoonist Alison Bechdel provides an introduction into why Jane Eyre remains as relevant today as it did when first published under the pen name “Currer Bell” in 1847. A postscript and panel discussions explaining Fawkes’ thought process behind certain illustrated panels round out the book.

Charlotte Brontë Before Jane Eyre is a fantastic introduction to one of Western literature’s most enduring authors. Tuck this one into your child’s backpack, there’s much here to inspire anyone apprehensive about heading back to school. And though most middle-grade readers may not be quite ready to pick up Jane Eyre, Fawkes’s biography will whet their appetite.