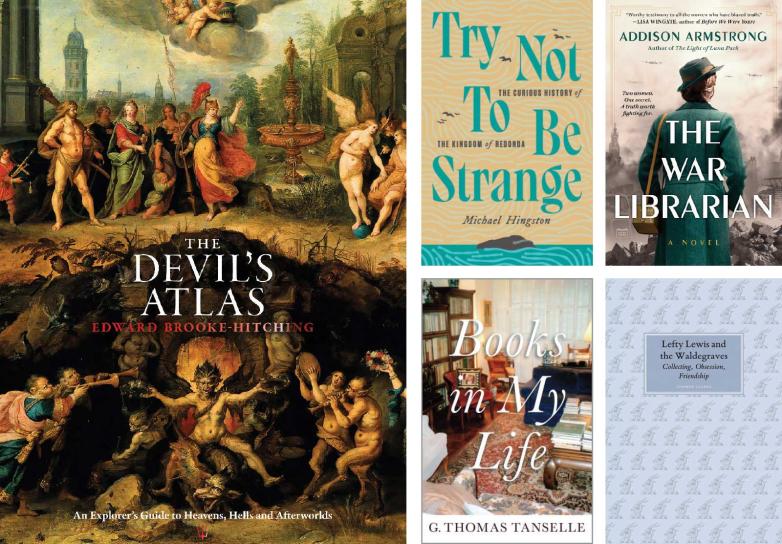 In our current issue, the Editor’s Shelf features “Five Picks for Autumnal Reading.” All fall under the category of ‘books about books:’ four nonfiction and one novel this time around. (For more recommendations, see our summer list.)

The Devil’s Atlas: An Explorer's Guide to Heavens, Hells and Afterworlds (Chronicle Books, $29.95). We last heard from author Edward Brooke-Hitching in spring 2021, when The Madman’s Library was published. His latest is the perfect shelf-mate to his previous work, brimming with vibrant imagery—from the Book of the Dead to Islamic manuscripts to William Blake, and, of course, an entire section devoted to Dante. Come for “an obsessive quest to track down works created around the world, across the ages, to chart, depict, and describe the afterlife” that originated in “the basement of a small London rare book shop;” stay for the clever writing and astonishing illustrations.

Michael Hingston’s Try Not to Be Strange: The Curious History of the Kingdom of Redonda (Biblioasis, $18.95) takes up a truly bizarre and largely unknown topic: a tiny, uninhabited island in the Caribbean Sea that a handful of authors over the past 140 years have claimed a royal stake in, including science fiction novelist M.P. Shiel (1865-1947), poet John Gawsworth (1912-1970), and author/publisher Jon Wynne-Tyson (1924-2020). The fourth king, Spain’s beloved author, Javier Marías, died last week. Combining travelogue, memoir, and literary history, Hingston has crafted a fascinating tale full of eccentric characters. Editions of all sizes play a role in the drama, and bibliophiles will also relish the author’s auction experience.

In light of its consideration of banned books, Addison Armstrong’s The War Librarian (Putnam, $17) feels timely. Yet the novel is set in World War I and follows a woman serving as a volunteer in the Library War Service who feels conflicted by the prohibition on material labeled anti-American by the higher-ups. A dual narrative depicts life at the Naval Academy for one of its first female cadets. Their paths cross late in the novel. Overall, a pleasant, casual read.

G. Thomas Tanselle is a giant in the world of bibliography, book collecting, and book history. The newly published collection, Books in My Life (BSUVA & Oak Knoll Press, $60), gathers some of his published essays—“Non-Firsts” (1979), “A Rationale of Collecting” (1998), “Books in My Life" (1999), “Association Copies” (2011), “The Pleasures of Being a Scholar-Collector" (2005), and “Association Copies” (2011), etc.—along with a largely unpublished memoir called “The Living Room” that focuses on the books and artifacts around him and the meaning they hold. We would dub this volume the ‘Essential Tanselle,’ for that is what it is.

Lefty Lewis and the Waldegraves: Collecting, Obsession, Friendship (The Book Collector, $19) by Stephen Clarke is a slim book, prettily illustrated, that tells the true story of an obsessive collector. (“Go on,” you say.) W.S. “Lefty” Lewis (1895-1979) devoted his life to collecting the work of eighteenth-century man of letters Horace Walpole, much of which had been inherited by the Waldegrave family. Lewis craftily befriends them during the 1930s in order to make offers on their manuscripts, which are rejected, at least until the family finds itself in dire straits. It’s an exciting tale, catnip for any bibliomaniac.