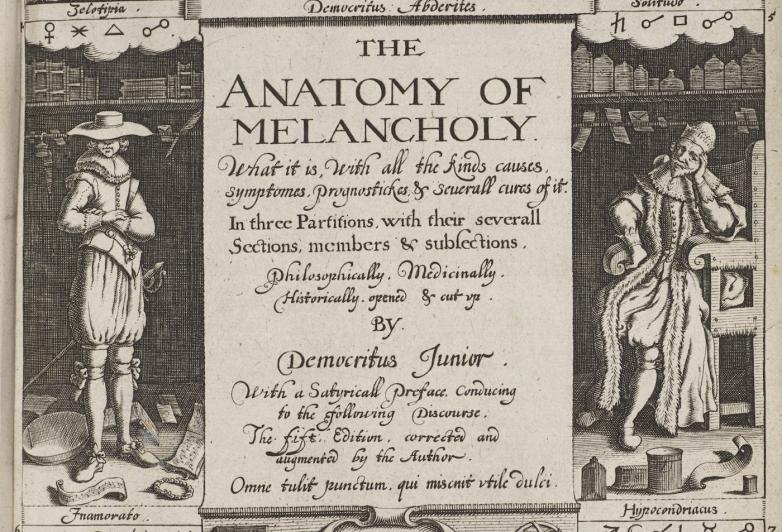 Detail from the engraved title page of the fifth edition of the Anatomy of Melancholy (1638).

Four hundred years ago, Oxford scholar Robert Burton published what some now consider the ‘grandfather of all self-help manuals,’ The Anatomy of Melancholy. The book contains Burton’s considerations on the nature and symptoms of melancholy (depression) as well as his suggestions for curatives like exercise and diet (but also reading … yay! and bloodletting … nooo!).

Though quite lengthy, The Anatomy of Melancholy was very popular and has been reprinted numerous times over the centuries. William Wordsworth owned an eighth edition from 1676, which, incidentally, sold for £3,187 ($4,345) at Bonhams in New York last month. I have a 1923 triple-decker from Bohn’s Popular Library. John Geddes, head of the department of psychiatry at the University of Oxford, also owns a special copy, one that may have inspired the new Bodleian exhibition, Melancholy: A New Anatomy, of which he is the lead curator.

“When I moved to Sheffield to do my initial training in psychiatry, I discovered a three-volume, nineteenth-century copy of The Anatomy of Melancholy in a secondhand bookshop. It's been with me ever since. I continually refer to it because it draws upon Burton’s in-depth and personal experience of melancholy and takes a very broad approach to melancholy, which we might now call depression,” Geddes commented in a press release. “This exhibition, focusing on the broad range of early modern approaches, therapies and treatments for melancholy, also shows surprising similarities with modern approaches. The nature of – and evidence-base for – modern therapies may have changed, but they often bear a remarkable resemblance to those first suggested by Robert Burton 400 years ago: from the suggestion to ‘be not solitary, be not idle’ to looking for ‘Mirth and merry Company.’ We can still learn a lot from reading Burton.”

The exhibition brings together a diverse group of academics from the university’s departments of psychiatry, English, and clinical neurosciences to explore the surprising parallels between Burton’s seventeenth-century treatise and modern-day research into mental health. Bibliotherapy (therapeutic reading) and scriptotherapy (therapeutic writing) are two cited examples of concepts that might seem new but, as Burton proves, have a long history.