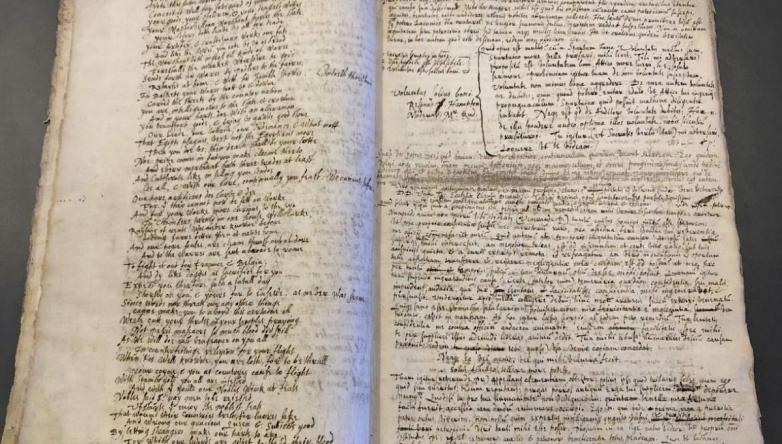 Courtesy of the Bodleian Libraries

Objects such as "The Dutch Church Libel" poem, which was pinned to the wall of a London church in 1593 and threatened Dutch settlers, many of whom were refugees of religious persecution.

Manuscripts, early prints, maps, and other treasures from the Bodleian Libraries’ collections in Oxford are on show in a new exhibition examining how 600 years of Anglo-Dutch history have affected books and book production. North Sea Crossings: Anglo-Dutch Books and the Adventures of Reynard the Fox looks at the period between the Norman Conquest in 1066 up to the ‘Glorious Revolution’ of 1688. The tricky fox Reynard, a recurring character in medieval manuscripts and early printed books, is represented here not only in print (e.g., William Caxton’s 1431 book, The History of Reynard the Fox), but in a display of puppets created by Katie Williams in collaboration with young people with special educational needs and disabilities.

Among the other books, manuscripts, and objects on view:

-The Coutrai Chest, an intricately-carved fourteenth-century casket inspired by the battle in Flanders which takes center stage in the early Middle English poem "The Flemish Insurrection."

- A seventeenth-century woodcut of an Anglo-Dutch brothel which was reputedly frequented by King James I.

-"The Dutch Church Libel" poem, an anti-Dutch migrant treatise pinned to the wall of a London church in 1593.

“At a time when travel abroad has been constrained,” said Bodley's Librarian, Richard Ovenden, “North Sea Crossings reminds us how deeply interconnected Britain has been with the Netherlands for more than a thousand years, and how much we gain as a society from those connections.”

The exhibition, a collaboration with the University of Bristol and the University of Cambridge, is co-curated by Anne Louise Avery whose retelling of the Reynard stories was published by the Bodleian last year. North Sea Crossings remains on view at the Weston Library, Bodleian Libraries, until April 18, 2022.