The Beats & Bukowski Coming up at PBA Galleries 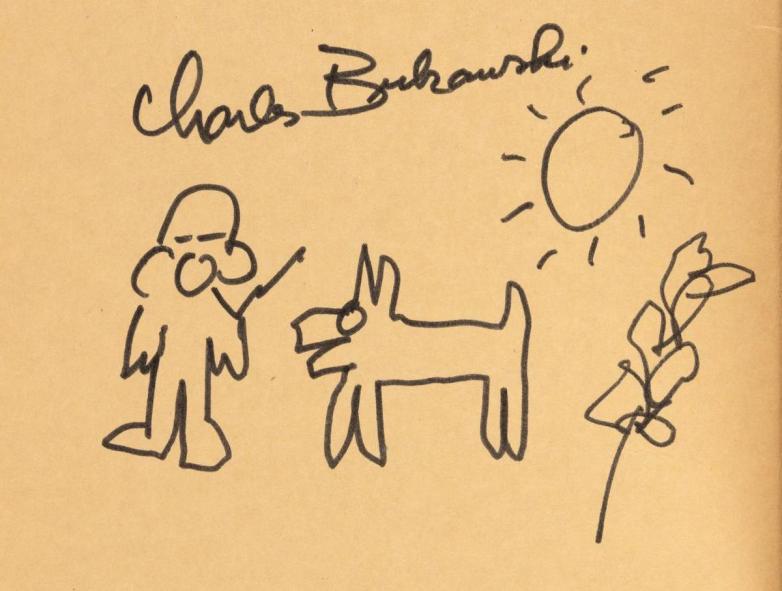 Inscription by Charles Bukowski in his Longshot Poems for Broke Players. Estimate: $5,000-8,000

Berkeley, CA — On September 22, 2022, PBA Galleries will host a sale with over 500 lots of fine literature and ephemera featuring scarce works from the counterculture and the Beat Generation, including a large section of rock and psychedelic posters. Featured as well are rare editions from Charles Bukowski, many with original artwork, as well as a large sampling of the works of Ray Bradbury, John Steinbeck, William Faulkner and other major voices of 20th century literature.

A highlight of the sale is the tenth novel in the James Bond series, On Her Majesty’s Secret Service, signed by author Ian Fleming, and one of only 250 copies published. It was the first title published after the film series began and the only one issued as a signed, limited edition. A color frontispiece portrait of the author by Amherst Villiers is included ($15,000/25,000).

Another notable offering is a copy of Of Mice and Men, a first edition presented in custom black morocco and cloth clamshell case. Inscribed by Steinbeck, it contains first issue points the words “and only moved because the heavy hands were pedula” on page 9 and a bullet between the two 8’s in the page number 88 ($7,000/10,000).

A featured lot is a Publisher’s Presentation Copy (one of 25) of Across the River and into the Trees by Ernest Hemingway. A specially bound first edition, inscribed and signed by publisher Charles Scribner and printed from the uncorrected sheets, it contains errors that were corrected in regular copies of the first edition ($6,000/9,000).

A notable copy of Tender is the Night: A Romance by F. Scott Fitzgerald also graces the auction. The last completed novel to be published in his lifetime, this first printing in the original jacket is a rare find ($5,000/8,000).

Just one of many Bukowski works in the auction is Longshot Poems for Broke Players, his rare third book which contains 26 poems and 5 drawings as well as an interesting inscription to fellow poet Seamus Cooney ($5,000/8,000)

Another remarkable lot is the signed letterpress poem You Do Not Have To Love Me by Leonard Cohen, the first broadside publication by Cohen in a literary career spanning over 60 years. A rare work, it is signed and is 1 of 26 copies accompanied by an original painting by Soheyl Dahi ($2,000/3,000).

Other featured lots include a rare set of original editions of Alice’s Adventures in Wonderland and Through the Looking-Glass and What Alice Found There ($4,000/6,000); a 1st edition of The Story of Ferdinand with the rear flap of the dust jacket reading a $1 price ($4,000/6,000); The Catcher in the Rye, first edition in the first issue dust jacket with a portrait of Salinger on the rear panel ($4,000/6,000).