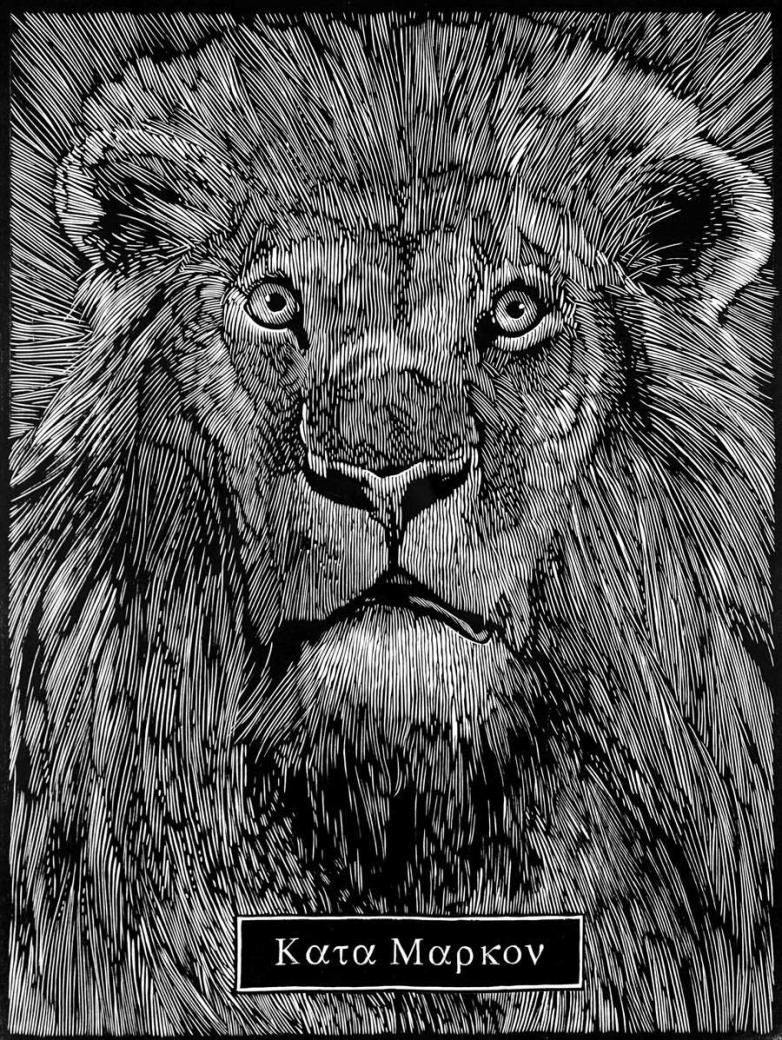 Reproduced with permission from Bromer Booksellers and Barry Moser.

Woodcut from The Gospel of Mark, Pennyroyal Press.

Next month, Boston’s Bromer Booksellers is unveiling a retrospective dedicated to master artist Barry Moser. On display will be 115 pieces: political art, portraiture, and prints and illustrations documenting Moser’s fluency illustrating everything from Alice in Wonderland to Moby-Dick.

A longtime friend of Moser, Bromer Booksellers co-founder Anne Bromer wanted to showcase his work in her new gallery space, which opened last November. Moser happily agreed. “The work spans nearly forty years, so it’s something of a retrospective,” said Moser. “Phil Salmon and Anne came out and hand-selected the pieces to show on their walls.” Entitled Barry Moser: The Storied Artist, the show covers the arc of Moser’s career, and is also the first Boston-based exhibition of his work in decades.

Born and raised in Chattanooga, Tennessee, Moser made his way to Western Massachusetts in the late sixties, where he forged a career involved in nearly every aspect of book-making, from design to printing to illustration. Moser refined his craft under the tutelage of Gehenna Press founder Leonard Baskin and eventually founded the Pennyroyal Press in 1969 where he focused on letterpress printing and illustration. Notable projects at Pennyroyal include Moser’s 1982 Alice’s Adventures in Wonderland (winner of the 1983 American Book Award for Design and Illustration), Mary Shelley’s Frankenstein, and an edition of the King James Bible--the first such endeavor undertaken by a single artist since Gustave Doré illustrated La Sainte Bible in 1865.

To date, Moser has illustrated over 250 books, and his work is found in the permanent collections of The National Gallery of Art, the Met, and the British Museum. He taught at RISD for a decade, was named the 1995 Oates Fellow in Humanities at Princeton in 1995, and currently teaches at Smith College in Northampton, Massachusetts.

Moser’s expertise is evident whether illustrating Alice or the Bible, yet each commission demands a different approach. “I am equally at home confronting Holy Writ as I am Brer Rabbit,” Moser said recently. “What I bring to those two worlds emotionally are, of course, widely different, but when I sit to make an image of Abraham about to cut his son’s throat, I bring the same expertise in composition and execution as I do Alice’s Queen of Hearts.” Still, successfully executing a project in various genres reveals range and depth that few modern illustrators possess. “It’s a gross understatement that the intellect--both artistic and scholarly--and emotions that were necessary to produce something like the King James Bible, are a great deal more taxing on me than, say, my edition of The Three Little Pigs,” explained Moser. “However, it must be said that when I’m composing and executing the image of the smart pig putting up his brick house, I am using the same skills and expertise I apply to inventing the image of the Crucifixion. It’s quite possible that I’m just simple-minded, but I can move back and forth with ease. I’ve never needed time or space to decompress from switching gears.”

Come see the master’s work for yourself. Barry Moser: The Storied Artist will be on exhibit at Bromer Gallery, 607 Boylston Street, Boston, from May 17-August 16, 2019. Visit gallery.bromer.com for more information.